I tend to forget. 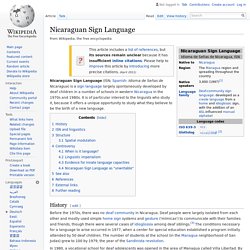 It is of particular interest to the linguists who study it, because it offers a unique opportunity to study what they believe to be the birth of a new language. History[edit] Before the 1970s, there was no deaf community in Nicaragua. Deaf people were largely isolated from each other and mostly used simple home sign systems and gesture ('mímicas') to communicate with their families and friends, though there were several cases of idioglossia among deaf siblings.[3] The conditions necessary for a language to arise occurred in 1977, when a center for special education established a program initially attended by 50 deaf children.

The American Society for Microbiologists hosted the first bacteria art competition ever and it was this beautiful. – interneti

Martha's Vineyard Sign Language. Hearing people sometimes signed even when there were no deaf people present: children signed behind a schoolteacher's back; adults signed to one another during church sermons; and farmers signed to their children across a wide field, where the spoken word would not carry.[3] Origins[edit] The ancestry of most of the deaf population of Martha's Vineyard can be traced back to a forested area in the south of England known as the Weald—specifically the part of the Weald in the county of Kent. 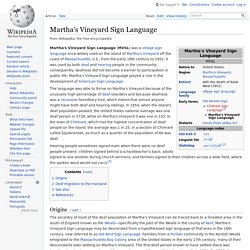 Martha's Vineyard Sign Language may be descended from a hypothesized sign language of that area in the 16th century, now referred to as Old Kent Sign Language. Families from a Puritan community in the Kentish Weald emigrated to the Massachusetts Bay Colony area of the United States in the early 17th century, many of their descendants later settling on Martha's Vineyard.

Deaf migration to the mainland[edit] Neuroanatomy of the brain. Saint Sarah. Saint Sarah, also known as Sara-la-Kali ("Sara the Black", Romani: Sara e Kali), is the patron saint of the Romani people. 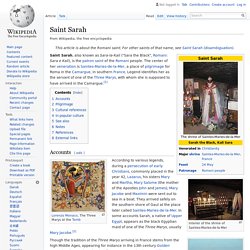 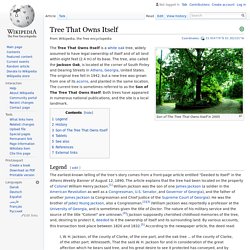 The tree, also called the Jackson Oak, is located at the corner of South Finley and Dearing Streets in Athens, Georgia, United States. The original tree fell in 1942, but a new tree was grown from one of its acorns, and planted in the same location. Ostrich guitar. The ostrich guitar or ostrich tuning is a type of trivial tuning. 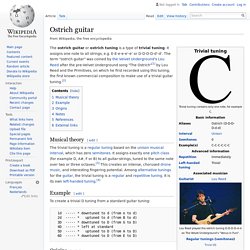 It assigns one note to all strings, e.g. E-E-e-e-e'-e' or D-D-D-D-d'-d'. The term "ostrich guitar" was coined by the Velvet Underground's Lou Reed after the pre-Velvet Underground song "The Ostrich"[1] by Lou Reed and the Primitives, on which he first recorded using this tuning, the first known commercial composition to make use of a trivial guitar tuning.[2] Musical theory[edit] Example[edit] Frank O´Hara reads "Having a coke with you" Showmen's Rest: The Clown Graveyard in Chicago.

Showmen’s Rest is the site of a mass burial of clowns and other circus performers in Chicago after a train wreck killed 86 members of the Hagenbeck-Wallace Circus in 1918. 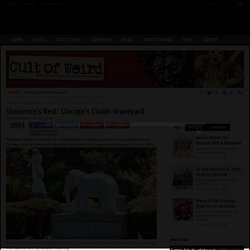 An elephant statue marks Showmen’s Rest, a mass grave of clowns and other circus performers. The lowered trunk symbolizes mourning. In Forest Park, Illinois, the Woodlawn Cemetery contains a large plot marked by elephant statues. Engraved at the base of one large elephant are the words Showmen’s League of America.

On the gravestones, the dates of death are all marked June 22, 1918. Nemanja Cvijanovic: power to the people. One of the most striking contributions to the latest edition of the Manifesta art biennial, which took place in Genk last year, was the work of Nemanja Cvijanovic. 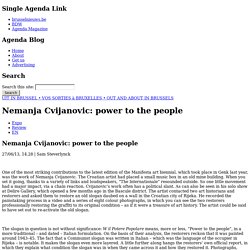 The Croatian artist had placed a small music box in an old mine building. Selfhood and Identity in Confucianism, Taoism, Buddhism, and Hinduism: Contrasts With the West. The Barrett Brown Review of Arts and Letters and Prison. Back in the go-go days of 2011 I got into some sort of post-modern running conflict with a certain declining superpower that shall remain nameless, and shortly afterwards found myself in jail awaiting trial on 17 federal criminal counts carrying a combined maximum sentence of 105 years in prison. 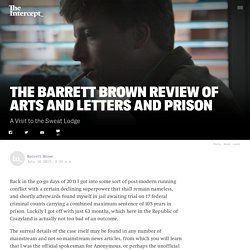 I’ve read through an entire 16th-century volume on alchemy out of pure spite. “Good News! Nadezhda Tolokonnikova of Pussy Riot's prison letters to Slavoj Žižek. 2 January 2013 Dear Nadezhda, I hope you have been able to organise your life in prison around small rituals that make it tolerable, and that you have time to read. 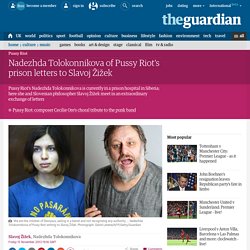 Here are my thoughts on your predicament. Edward Said Recalls His Depressing Meeting With Sartre, de Beauvoir & Foucault (1979) Image by Joe Pineiro. 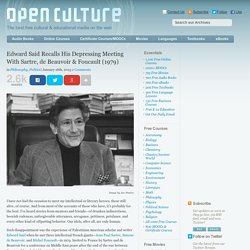 French Philosopher Jean Baudrillard Reads His Poetry, Backed By All-Star Arts Band (1996) Hear Friedrich Nietzsche's Classical Piano Compositions: They're Aphoristic Like His Philosophy. In March, we featured 43 original tracks of classical music by philosopher and self-taught composer Friedrich Nietzsche, better known as the author of books like Thus Spoke Zarathustra and Beyond Good and Evil. Despite the enduring importance of his textual output, Josh Jones noted that “what Nietzsche loved most was music.” He “found the mundane work of politics and nationalist conquest, with its tribalism and moral pretensions, thoroughly distasteful.

Anne Lockley having tea with the spiny lobster and baby hawk.

Anne Lockley and her family lived alone on an island called Skokholm. Here she is pictured having tea with her friends, the spiny lobster and baby hawk. National Geographic, August 1938. – interneti

Immigration crisis on hungarian/serbian border livestreamed from both perspectives. First Letter from Julian Assange to Benedict Cumberbatch Over The Fifth Estate. Date: Tue, 15 Jan 2013 From: Julian Assange To: Benedict Cumberbatch Subject: Message from Assange Dear Benedict, Thank you for trying to contact me. It is the first approach by anyone from the Dreamworks production to me or WikiLeaks. My assistants communicated your request to me, and I have given it a lot of thought and examined your previous work, which I am fond of.

I think I would enjoy meeting you. The bond that develops between an actor and a living subject is significant. Flammarion engraving. A traveller puts his head under the edge of the firmament in the original (1888) printing of the Flammarion engraving. The Flammarion engraving is a wood engraving by an unknown artist, so named because its first documented appearance is in Camille Flammarion's 1888 book L'atmosphère: météorologie populaire ("The Atmosphere: Popular Meteorology").[1] The engraving has often, but erroneously, been referred to as a woodcut. It has been used to represent a supposedly medieval cosmology, including a flat earth bounded by a solid and opaque sky, or firmament, and also as a metaphorical illustration of either the scientific or the mystical quests for knowledge.

Description[edit] The engraving depicts a man, clothed in a long robe and carrying a staff, who kneels down and passes his head, shoulders, and right arm through a gap between the star-studded sky and the earth, discovering a marvellous realm of circling clouds, fires and suns beyond the heavens. Attribution[edit] Literary sources[edit] Láadan. Phonology[edit] Tones[edit] Cicada 3301. Cicada 3301 is a name given to an enigmatic organization that on three occasions has posted a set of complex puzzles to recruit "highly intelligent individuals" from the public.[1] The first Internet puzzle started on January 4, 2012, and ran for approximately one month. A second round began one year later on January 4, 2013, and a third round is ongoing following confirmation of a fresh clue posted on Twitter on January 4, 2014.[2][3] The stated intent was to recruit "intelligent individuals" by presenting a series of puzzles which were to be solved, each in order, to find the next.

No new puzzles were published on January 4, 2015. The puzzles focused heavily on data security, cryptography, and steganography.[1][4][5][6][7] Uncanny. The uncanny (German: Das Unheimliche, "the opposite of what is familiar") is a mixture of the familiar and unfamiliar that is experienced as being peculiar.[1] The psychological concept of the uncanny as something that is strangely familiar, rather than just mysterious, was perhaps first fixed by Sigmund Freud in his essay Das Unheimliche.[2][3] Cryptophasia. Cryptophasia is a phenomenon of a language developed by twins (identical or fraternal) that only the two children could understand.[1] The word has its roots from crypto meaning secret and phasia meaning speech. Most linguists associate cryptophasia with idioglossia, which is any language used by only one, or very few, people.

Rene and Georgette Magritte photographed by Duane Michals in 1965. "A što ćemo ljubav kriti" Jugoslovensko muzičko naslijeđe i postjugoslovenski kvir. List of unsolved problems in neuroscience. Some of the yet unsolved problems of neuroscience include: References[edit] External links[edit] Paris syndrome. Paris syndrome (French: Syndrome de Paris, Japanese: パリ症候群, Pari shōkōgun) is a transient psychological disorder exhibited by some individuals visiting or vacationing in Paris or elsewhere in Western Europe. Bruxism. Bruxism, also known as tooth grinding, is the excessive grinding of the teeth and/or excessive clenching of the jaw.[1] It is an oral parafunctional activity;[1] i.e., it is unrelated to normal function such as eating or talking.

Raynaud's phenomenon. In medicine, Raynaud's phenomenon /reɪˈnoʊz/ or Raynaud phenomenon is excessively reduced blood flow in response to cold or emotional stress, causing discoloration of the fingers, toes, and occasionally other areas. Richard Feynman playing bongos. Dustin Hoffman on TOOTSIE and his character Dorothy Michaels. Garden path sentence. As a person reads a garden path sentence, the reader builds up a structure of meaning one word at a time. At some point, it becomes clear to the reader that the next word or phrase cannot be incorporated into the structure built up thus far; it is inconsistent with the path down which they have been led. Satan panonski - Oči u magli. Unthought known.

Unthought known is a phrase coined by Christopher Bollas in the 1980s to represent those experiences in some way known to the individual, but about which s/he is unable to think. At its most compelling, the unthought known stands for those early schema for interpreting the object world that preconsciously determine our subsequent life expectations.[1] In this sense, the unthought known refers to preverbal, unschematised early experience/trauma that may determine one's behaviour unconsciously, barred to conscious thought.[2] Prehistory[edit] NIKŠA FULGOSI: Ljubavni jadi Pepeka Gumbasa i Marijete Buble ili kako smo preživjeli seksualni odgoj bez intervencije Ustavnog suda.