Botticelli portrait could sell at auction for over $80M - CNN Style. Written by Lily Smith, CNN Contributors Oscar Holland, CNN A 15th-century painting by early Renaissance painter Sandro Botticelli is expected to sell for over $80 million when it goes under the hammer in New York next year. 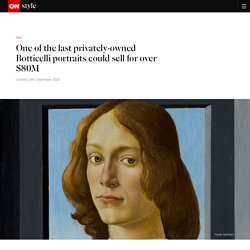 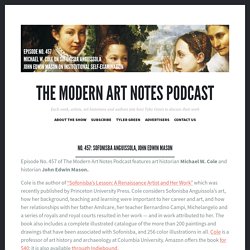 Cole and historian John Edwin Mason. Cole is the author of “Sofonisba’s Lesson: A Renaissance Artist and Her Work” which was recently published by Princeton University Press. Cole considers Sofonisba Anguissola’s art, how her background, teaching and learning were important to her career and art, and how her relationships with her father Amilcare, her teacher Bernardino Campi, Michelangelo and a series of royals and royal courts resulted in her work — and in work attributed to her. The book also includes a complete illustrated catalogue of the more than 200 paintings and drawings that have been associated with Sofonisba, and 256 color illustrations in all. 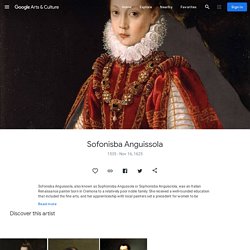 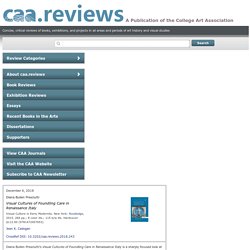 In case you have trouble sleeping tonight, I've put up a new episode of Art History at Bedtime (available on all good podcast platforms). It's Soprani's life of Sofonisba Anguisola (c.1532-1625), the first great woman artist of the Renaissance. 'Saint Jerome in his Study' in 10 minutes. The Art Newspaper sur Twitter : "The charity @VeniceinPeril has released images of a nativity triptych by the Bellini workshop which was in the final stages of cleaning before conservation studios closed last month due to the coronavirus outbreak.

OMG. Even if you don't care about the art market and illicit trade in cultural property, you HAVE to read this. How artworks get their prices. Take a virtual tour of once-in-a-lifetime Raphael show in Rome that closed after four days due to coronavirus. The 13-minute virtual tour, in Italian, of the major Raphael show at the Scuderie del Quirinale in Rome is available on the venue’s youtube channel As Italy enters its fourth week of coronavirus lockdown the ministry of culture is ramping up its efforts to provide virtual access to the country’s collections and heritage sites which closed to the public on 10 March. 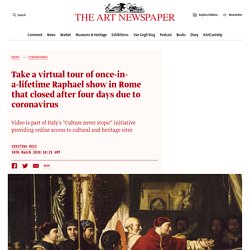 Over 400 museums and archaeological sites have joined a portal website entitled “Culture never stops!” Which has been launched by the ministry of culture and “the number is growing every day” says Antonio Lampis, the director general of museums at the ministry. “In this difficult time, it is important to remember that although our cultural heritage sites may be temporarily closed, they represent the beating heart of our identity,” Lampis says. 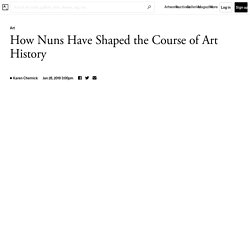 “We would never assign a Sacra conversatione [a type of devotional painting depicting the Virgin and Child] by Fra Angelico and a portrait by Fra Filippo Lippi to the same genre simply because both happen to have been painted by friars,” art historian Jeffrey F. Hamburger writes in his book Nuns as Artists (1997). “Far from providing an apt, let alone productive, characterization of the images it seeks to define, Nonnenarbeit stands by definition for deficiency: a lack of both skill and sophistication.”

The term also neglects that these devotional images were, in their time, considered intellectual arts. Convents have always supported themselves with a number of craft enterprises, the real moneymakers being embroidery and textile work. Recently, a group of scholars has argued that these works deserve a closer look. What can we learn from the Medicis’ almost 500-year old burial clothes? @AmberButchart investigates. Digitised Manuscripts. Understanding Donatello’s “David” as a Work of Gay Ary. 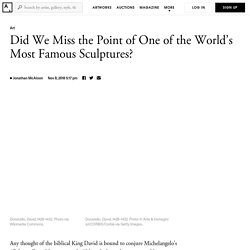 It’s not clear exactly how viewers responded to this work. In 1504, Francesco di Lorenzo Filarete, a poet and herald in the Florentine government, advised that Michelangelo’s new David might replace Donatello’s in the the Palazzo Vecchio, and the latter be moved elsewhere. Donatello’s sculpture, he said, was “imperfect”: Its leg looked schiocha—meaning silly or awkward—from behind.

In the poetry of the day, schiocha was also a colloquial term for a male lover or object of desire. Filarete implied that viewers might have felt it was inappropriate for the biblical king to be depicted in such a sexualized way, even though the much-discussed love between David and Saul’s son Jonathan serves as one of the closest bonds between two men in the bible. Art historian H.W. When viewed in this context, it seems plausible that Donatello’s David could both symbolize the resilient city-state and openly celebrate Florence’s queer culture. Rembrandt's Room □ sur Twitter : "Bronzino's extraordinary crucifixion, c1545, described by Vasari but long thought to be lost. Rediscovered some years ago in Nice, where it languished unattributed in the museum's depot. A trompe l'oeil tourde force. 3rd. Westchester Community College. Italian Renaissance Art (1400–1600) Images: Donatello, David, mid-fifteenth centuryBrunelleschi, Dome for Florence Cathedral, 1420–35Brunelleschi, San Lorenzo, mid-fifteenth centuryMasaccio, Trinity, c. 1425Masaccio, Tribute Money, c. 1427Leonardo da Vinci, Mona Lisa, c. 1505Leonardo da Vinci, Last Supper, c. 1495Raphael, School of Athens, c. 1510Raphael, Madonna of the Meadows, c. 1505Michelangelo, Sistine Chapel Ceiling and Creation of Adam, c. 1510Michelangelo, David, 1501–4Titian, Venus of Urbino, 1538Parmigianino, Madonna of the Long Neck, 1534-1540Michelangelo, Sistine Chapel Last Judgment, 1537-1541Sofonisba Anguissola, Self-Portrait at the Easel, 1556Sofonisba Anguissola, Portrait of the Artist’s Sisters, 1555Annibale Carracci, The Beaneater, 1584-1585Annibale Carracci, Mystic Marriage of St. 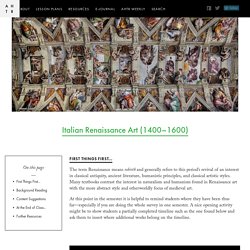 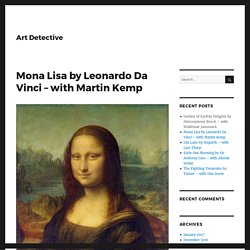 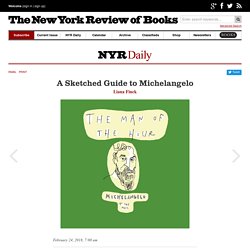 Architecture 28 Andrea Palladio The Villa Barbaro. A Free Course on Dante's Divine Comedy from Yale University. The man in charge of modernising the Uffizi. Eike Schmidt is the most high-profile of the new directors appointed to run Italy’s leading museums. He talks to Apollo about his sensitive reforms of the Uffizi and keeping up the pace of change Eike Schmidt is a busy man. Arriving at the Uffizi to interview its director on a late Friday afternoon in February, I find a small huddle of people outside his office waiting to meet with him. When we finally sit down to speak, an hour or so later, the incoming phone calls and messages leave us only a few interludes in which to discuss his first 15 months in charge before he must depart, apologetically, for a reception welcoming the new musical director of the Florence Opera.

For now, Schmidt tells me, this job occupies him seven days a week. It is the imported cultural leaders who face the greatest scrutiny, and none more so than Schmidt. Da Vinci's Vitruvian Man of math - James Earle. Pico della Mirandola’s Oration on the Dignity of Man Numberphile did a great explanation of “Squaring the Circle” See James Earle's other Lesson. After Rome was destroyed, people were wary of attachment to physical beauty. As Christianity gained traction, Romans instead began to focus on the metaphysical beauty of virtue, and art began to follow suit.

James Earle discusses how Medieval paintings of Madonna were affected by this shift. The Vitruvian Man is a drawing created by Leonardo da Vinci circa 1490.It is accompanied by notes based on the work of the architect Vitruvius. The drawing, which is in pen and ink on paper, depicts a male figure in two superimposed positions with his arms and legs apart and simultaneously inscribed in a circle and square.

GIORGIO VASARI'S LIVES OF THE ARTISTS. This page will, in time, contain all of Giorgio Vasari's Lives of the Artists, all in unabridged English translations. Each Life will be supplimented by illustrations and a bibliography. Comments and suggestions are welcome. Please note that the undersigned claims all rights and privileges under current copyright laws. I am unable to respond in any way to requests for help with homework, theses, or dissertations. Part 1 Part 2 Part 3 A note on the translations: The only full English translation of Vasari's Lives is that by Gaston C.

Proceed to read this lecture. While you read it, please go to web media also linked in this subunit to view the artworks discussed. The Bernard Smith Art History Lectures were given at an undergraduate level at the University of Melbourne by Professor Bernard Smith between 1956 and 1966. In Florence, they're bringing the works of women artists out of the basement. Virtual Tour of Uffizi Gallery Florence Lets You Explore the Museum Online. Today, an increasing number of cultural institutions across the globe are finding new ways to digitally attract and educate audiences. From 3D scans of sculptures to free art books, many arts organizations now provide free online resources to the public.

In addition to research tools, however, some museums have taken this digitization trend to the next level by offering exclusive virtual tours of their premises and permanent collections through their websites, with Florence’s famed Uffizi Gallery as a recent recruit. New Renaissance: how Florence is freeing its great female artists. Behind the Fig Leaf—a Story of Sin, Censorship, and the Catholic Church. The trend also transformed Masaccio’s 15th-century frescoes in Florence’s Brancacci Chapel. Afro-atlantic-histories-sao-paulo-museum-of-art-tomie-ohtake-institute. SÃO PAULO, Brazil — It’s worth going a distance for greatness. And great is what the exhibition “Histórias Afro-Atlânticas” (“Afro-Atlantic Histories”) is.