Secretly filmed while you shop: Some of Britain's biggest stores record their... Shoppers have been secretly filmed by big stores to try to make them spend more. 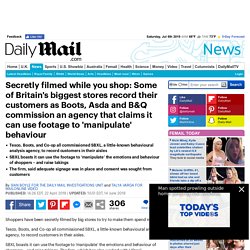 Tesco, Boots, and Co-op all commissioned SBXL, a little-known behavioural analysis agency, to record customers in their aisles. SBXL boasts it can use the footage to ‘manipulate’ the emotions and behaviour of shoppers – and raise takings. The firm, which has also worked with L’Oreal, Coca-Cola, Danone and Kellogg’s, said adequate signage was in place and consent was sought from customers. However, the Information Commissioner’s Office said last night that it would examine the Daily Mail’s findings to check for breaches of data protection laws.

Our undercover investigation also revealed that: SBXL monitors Boots customers via cameras in shelves. Spy cameras: Call the police if you see these ‘hooks’ in a public restroom. Spy cameras come in all shapes and sizes. 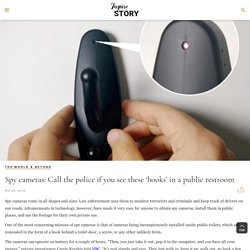 Law enforcement uses them to monitor terrorists and criminals and keep track of drivers on our roads. Advancements in technology, however, have made it very easy for anyone to obtain spy cameras, install them in public places, and use the footage for their own private use. Index. Two men have been arrested and another pair investigated in connection with the scandal, which involved 42 rooms in 30 accommodations in 10 cities around the country. 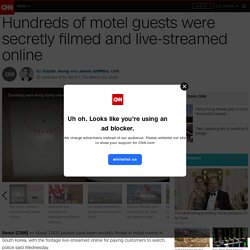 Police said there was no indication the businesses were complicit in the scheme. In South Korea, small hotels of the type involved in this case are generally referred to as motels or inns. Cameras were hidden inside digital TV boxes, wall sockets and hairdryer holders and the footage was streamed online, the Cyber Investigation Department at the National Police Agency said in a statement. The site had more than 4,000 members, 97 of whom paid a $44.95 monthly fee to access extra features, such as the ability to replay certain live streams.

Between November 2018 and this month, police said, the service brought in upward of $6,000. South Korea has a serious problem with spy cameras and illicit filming. Airlines admit having cameras installed on back of passengers’ seats. Three of the world’s biggest airlines have admitted some of their planes have cameras installed on the backs of passenger seats. 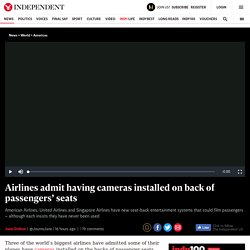 American Airlines, United Airlines and Singapore Airlines have new seat-back entertainment systems that include cameras. They could also be on planes used by other carriers. We’ll tell you what’s true. You can form your own view. From 15p €0.18 $0.18 $0.27 a day, more exclusives, analysis and extras. Companies that make the entertainment systems are fitting them with cameras to offer passengers options such as seat-to-seat video conferencing, according to an American Airlines spokesman. 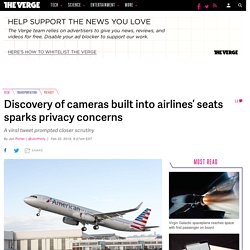 Both airlines have confirmed that the cameras exist, but they say they were included with off-the-shelf parts from manufacturers and have not been activated. The airlines also confirmed that they have no plans to use them in the future. The cameras were originally spotted on a Singapore Airlines flight by Twitter user @vkamluk, and BuzzFeed News also found that one of its own former employees had seen a camera in an American Airlines flight. Their existence dates back to at least June 2017 when they can be spotted in pictures of an American Airlines plane in a post from The Points Guy.

Although the airlines in question say the cameras are inactive, they still present a privacy risk. It’s a similar problem to the microphone that was recently discovered in Nest’s security system. Google in hot water after not revealing it had hidden a secret microphone in home alarm product. As if some folks weren’t concerned enough about the infiltration of potentially privacy-busting devices into the home, Google has admitted it did not disclose that it hid a secret microphone inside one of its products. 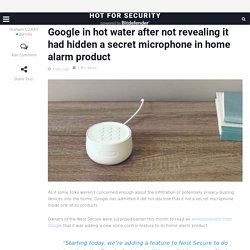 Owners of the Nest Secure were surprised earlier this month to read an announcement from Google that it was adding a new voice control feature to its home alarm product: “Starting today, we’re adding a feature to Nest Secure to do just that: the Google Assistant will be available on your Nest Guard, so you can ask it questions like, “Hey Google, do I need an umbrella today?” Google admits error over hidden microphone. Image copyright Google. 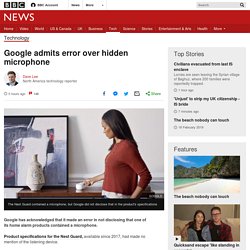 Airplane seat cameras could be your new spy in the sky. If Elon Musk is to be believed, the future of air travel involves superfast flights on Big F--king Rockets, taking us from London to Tokyo in 37 minutes of chrome-clad comfort. 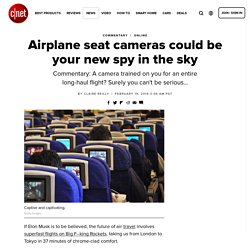 But we are disgusting monsters and that is not the future we deserve. In our timeline, the aircraft of the future will be a flying nightmare tube, full of belching human meat sacks crammed cheek by jowl into rows of seats that record our every movement. At least that's the future that one Singapore Airlines passenger uncovered this week. Twitter user Vitaly Kamluk shared a photo of what looked like a camera installed directly beneath the inflight entertainment screen on a Singapore Airlines aircraft.

Singapore Airlines replied that it was indeed a camera, embedded into the seat back by the original equipment manufacturers of the plane, but said the cameras had been disabled on its aircraft and "there are no plans to develop any features" using them. But the reality is anything but. And oh, the vomiting.