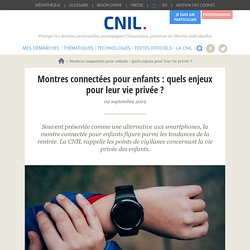 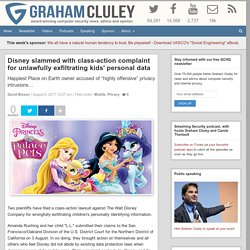 Amanda Rushing and her child "L.L. " submitted their claims to the San Francisco/Oakland Division of the U.S. District Court for the Northern District of California on 3 August. In so doing, they brought action on themselves and all others who feel Disney did not abide by existing data protection laws when designing some of its mobile apps. Their complaint seeks to try Disney and its partners by jury for their alleged violations. The class-action lawsuit reaches back to 14 January 2014 when Ms. As it turns out, Disney had consulted with three partners to insert advertising-specific software development kits (SDKs) into Disney Princess Palace Pets and some of its other applications.

SDKs are not illegal on their own. Take Disney. As the complaint states: Ms. FTC Schools "Smart" Toys with Updated COPPA Compliance Guidance. The Federal Trade Commission (“FTC”) released an updated guidance document for complying with the Children’s Online Privacy Protection Act (“COPPA”). 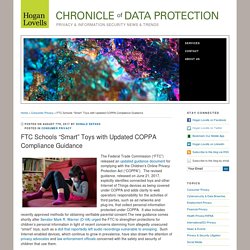 The revised guidance, released on June 21, 2017, explicitly identifies connected toys and other Internet of Things devices as being covered under COPPA and adds clarity to web operators’ responsibility for the activities of third parties, such as ad networks and plug-ins, that collect personal information protected under COPPA. It also includes recently approved methods for obtaining verifiable parental consent.The new guidance comes shortly after Senator Mark R.

Protecting kids from insecure devices and invasive online services – Kaspersky Lab official blog. Considering the sweeping regulations and laws meant to safeguard children’s privacy in particular, you might think electronic devices and connected toys for kids would be particularly safe and secure. 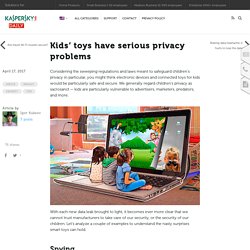 We generally regard children’s privacy as sacrosanct — kids are particularly vulnerable to advertisers, marketers, predators, and more. With each new data leak brought to light, it becomes ever more clear that we cannot trust manufacturers to take care of our security, or the security of our children. Let’s analyze a couple of examples to understand the nasty surprises smart toys can hold. Spying In December 2016, privacy advocates filed a complaint with the US Federal Trade Commission against Genesis Toys, producer of Cayla dolls and i-Que toy robots. The plaintiffs were quite clear from the start: “This complaint concerns toys that spy.” Let’s examine the elements of the claim: Toys That Listen: A Study of Parents, Children, and Internet-Connected Toys. This post was written by Emily McReynolds, Program Director for the Tech Policy Lab at the University of Washington. 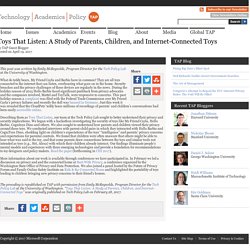 What do teddy bears, My Friend Cayla and Barbie have in common? They are all toys connected to the internet that can listen, overhearing what goes on in the home. Security breaches and the privacy challenges of these devices are regularly in the news. During the holiday season of 2015 Hello Barbie faced significant pushback from privacy advocates and the companies involved, Mattel and ToyTalk, were responsive to concerns. This past holiday season a complaint was filed with the Federal Trade Commission over My Friend Cayla’s privacy failures and recently the doll was banned in Germany. Germany Issues Kill Order for a Domestic Spy—Cayla the Toy Doll - WSJ.

Hacking the playroom: How can children be safe and protected in the digital w... This year, the digital world will reach a significant milestone – Almost 50% of the world’s estimated 7.4 billion population will be online. 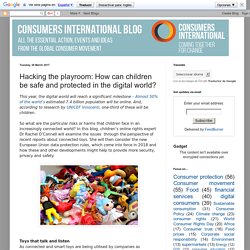 And, according to research by UNICEF Innocenti, one-third of these will be children. So what are the particular risks or harms that children face in an increasingly connected world? Jrc105061_final_online. Teddy bears involved in hacking 800,000 user records – IT Governance USA Blog. Teddy bears that send and receive audio messages via smartphones have become the center of a major security threat. 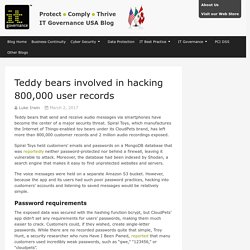 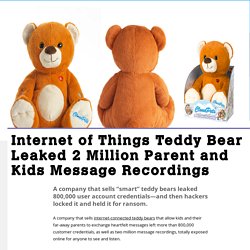 Since Christmas day of last year and at least until the first week of January, Spiral Toys left customer data of its CloudPets brand on a database that wasn't behind a firewall or password-protected. The MongoDB was easy to find using Shodan, a search engine makes it easy to find unprotected websites and servers, according to several security researchers who found and inspected the data. The exposed data included more than 800,000 emails and passwords, which are secured with the strong, and thus supposedly harder to crack, hashing function bcrypt. During the time the data was exposed, at least two security researchers, and likely malicious hackers, got their hands on it.