Journalists Aren’t the Enemy of the People. But We’re Not Your Friends. Mr. 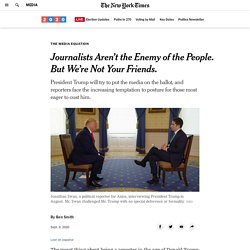 What lessons can the UK media learn from US reporting on Trump? If one wanted a metaphor for the perils and trials of modern political journalism, then perhaps the shirtless man with a glockenspiel who has been hammering away outside the Houses of Parliament can provide one (as well as a nifty rendition of Axel F). 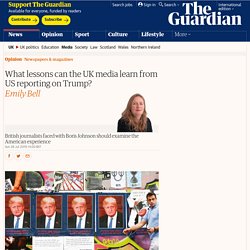 Glockenspiel man provided the noisy background music for the momentous transition from Theresa May to the great dissembler. He made a good fist of drowning out every political interview on every major broadcast channel last week as Boris Johnson made it to Downing Street. If only there were some soundproof structure where politicians could be quietly interviewed without external interruption. Big-money investors are propping up partisan websites to fill the local news vacuum - Axios. How news outlets are dealing with the 'moral dimension' of covering Trump and his racist tweets. President Trump launched a bigoted attack against four minority congresswomen on Sunday morning. 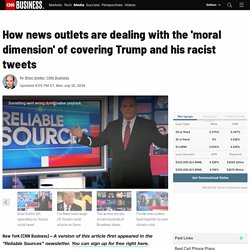 His tweets were straight up racist. Did the news media accurately describe it that way? By and large, no, most major news outlets did not do that. Reporters and anchors took the story seriously but largely leaned on "critics," primarily Democrats, and cited their accusations of racism. Conspiracyland: La conexión rusa con las conspiraciones de Seth Rich. WASHINGTON — In the summer of 2016, Russian intelligence agents secretly planted a fake report claiming that Democratic National Committee staffer Seth Rich was gunned down by a squad of assassins working for Hillary Clinton, giving rise to a notorious conspiracy theory that captivated conservative activists and was later promoted from inside President Trump’s White House, a Yahoo News investigation has found. 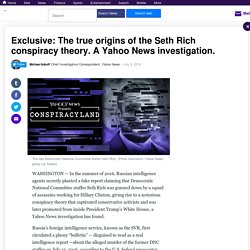 Russia’s foreign intelligence service, known as the SVR, first circulated a phony “bulletin” — disguised to read as a real intelligence report —about the alleged murder of the former DNC staffer on July 13, 2016, according to the U.S. federal prosecutor who was in charge of the Rich case. That was just three days after Rich, 27, was killed in what police believed was a botched robbery while walking home to his group house in the Bloomingdale neighborhood of Washington, D.C., about 30 blocks north of the Capitol. Seth Rich: Un asesinato, convertido en un gran bulo conspirativo en Washington. Seth Rich podría haber sido una víctima de asesinato más en la capital de Estados Unidos. 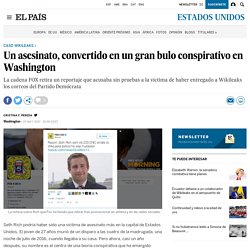 Is the business model for American national news “Trump plus rolling scandals”? And is that sustainable? Editor’s note: Nearly a decade ago, freshly minted Ph.D. in hand, C.W. 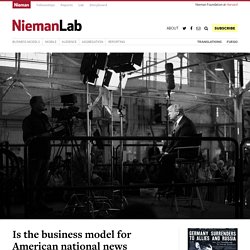 Anderson wrote his first Nieman Lab post. Today, several books and tens of thousands of tweets later, he’s a professor of media and communication at the University of Leeds. Last fall, he published his latest book, an examination of the history of data journalism that goes back to the 19th century. Lívia Vieira, a Brazilian journalism researcher and professor, recently interviewed Chris for the Brazilian media publication Farol Jornalismo, and I’m happy to present a lightly edited English-language version of it. 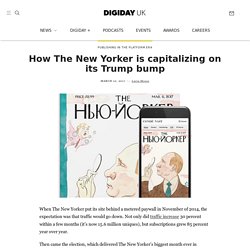 Not only did traffic increase 30 percent within a few months (it’s now 15.6 million uniques), but subscriptions grew 85 percent year over year. Then came the election, which delivered The New Yorker’s biggest month ever in subscription growth in January, when it sold 100,000, a 300 percent increase over the year-ago month. Circulation is now the highest it’s ever been, at 1.1 million, a combination of print/digital, print-only and digital-only. Trump's shock factor wears off, causing a slump for the media - Axios. Hating on journalists the way Trump and his core supporters do is not an act of press criticism. It’s a way of doing politics. “Hate movements” are the mobilization of resentment against a particular group of people for political purposes. 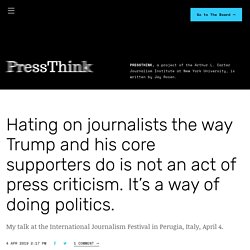 When journalists are the group targeted, those of us who believe in a free press have a right to be worried, and a duty to understand. I am going to focus on the hate movement against journalists that President Trump is leading in the U.S. But I am not saying this kind of movement originated in America. I am not claiming that it is anything “new.” Is the business model for American national news “Trump plus rolling scandals”? And is that sustainable? Editor’s note: Nearly a decade ago, freshly minted Ph.D. in hand, C.W. 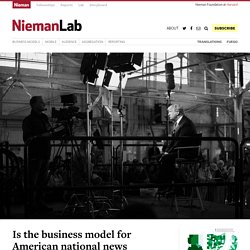 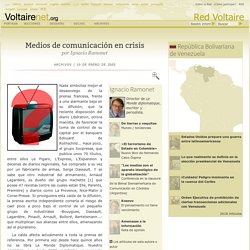 Top findings: About 20 percent of all metro and community newspapers in the United States — about 1,800 — have gone out of business or merged since 2004, when about 9,000 were being published.Hundreds more have scaled back coverage so much that they’ve become what the researchers call “ghost newspapers.” Almost all other newspapers still publishing have also scaled back, just less drastically.Online news sites, as well as some TV newsrooms and cable access channels, are working hard to keep local reporting alive, but these are taking root far more slowly than newspapers are dying. Hence the 1,300 communities that have lost all local coverage. Comprehensive, searchable database 2. The crisis in journalism has become a crisis for our democracy. Report for America is ready to kick growth into a higher gear. Report for America, an ambitious attempt to bring the Peace Corps/Teach for America model to local journalism, is opening applications to news organizations and sponsored reporters for a second year.

The project expects to double the number of placements to 28, co-founder Steve Waldman told me this week. Then the pace will quicken. "We do need to keep refining," he said, "but if all goes well we hope to get to 250 in year three. " That would put Report for America on a path to fielding 1,000 local reporters by 2022, Waldman's stated goal.

The gating factor is securing a quantum jump in support from foundations or from a few key individual contributors. Report for America had 780 applicants for 13 spots in the first cohort, and 85 organizations tried to secure the reporting help. The Media Bubble is Real — And Worse Than You Think. How did big media miss the Donald Trump swell? News organizations old and new, large and small, print and online, broadcast and cable assigned phalanxes of reporters armed with the most sophisticated polling data and analysis to cover the presidential campaign. The overwhelming assumption was that the race was Hillary Clinton’s for the taking, and the real question wasn’t how sweeping her November victory would be, but how far out to sea her wave would send political parvenu Trump. Today, it’s Trump who occupies the White House and Clinton who’s drifting out to sea—an outcome that arrived not just as an embarrassment for the press but as an indictment.

In some profound way, the election made clear, the national media just doesn’t get the nation it purportedly covers. What went so wrong? Story Continued Below. Analyze Your Local News EnvironmentThe Expanding News Desert. The Expanding News Desert. From our very beginnings as a nation, newspapers have played a vital role in building community. Strong newspapers fostered a sense of geographic identity and in the process nurtured social cohesion and grassroots political activism. The stories and editorials they published helped set the agenda for debate of important issues, influence the policy and political decisions we made, and build trust in our institutions.

The advertisements they carried drove local commerce and regional economic growth by putting potential customers together with local businesses. Ron Heifetz, professor at Harvard University’s John F. Kennedy School of Government, describes a newspaper as “an anchor” because it “reminds a community every day of its collective identity, the stake we have in one another and the lessons of our history. The Expanding News Desert. About 1,300 U.S. communities have totally lost news coverage, UNC news desert study finds.

El amor-odio de Trump hacia la prensa. Sobre la alergia de Donald Trump a la prensa crítica han corrido ríos de tinta. Soy parte de la resistencia dentro del gobierno de Trump – Español. Read in English. NPR, ‘Unite the Right,’ and how journalists cover white nationalism. The Model for Donald Trump’s Media Relations Is Joseph McCarthy. Journalists are not the enemy. More than 300 newspapers join Globe effort on freedom of the press editorials. More than 300 news publications across the United States have committed to a Boston Globe-coordinated effort to run editorials Thursday promoting the freedom of the press, in light of President Trump’s frequent attacks on the media. Some of the most respected and widely circulated newspapers in the country have committed to taking a stand in their editorial pages, including The New York Times, The Dallas Morning News, The Denver Post, The Philadelphia Inquirer, and the Chicago Sun-Times.

The list ranges from large metropolitan dailies to small weekly papers with circulations as low as 4,000. The Guardian view on the press and Trump: speaking truth to power. Press freedom was not invented in the United States, but there are few nations in which the importance of an independent press has been so closely woven into its long history.

This great American tradition of civic respect for truth and truth-telling is now under threat. Donald Trump is not the first US president to attack the press or to feel unfairly treated by it. But he is the first who appears to have a calculated and consistent policy of undermining, delegitimising and even endangering the press’s work. On Thursday, following an initiative by the Boston Globe, it is expected that some 350 editorial boards in news organisations across the United States will publish their own editorial comments on this issue. There is, of course, a risk in this initiative, and there will be differing press views about it. A Free Press Needs You. America, help! The freedom of the nation depends on you, hundreds of news outlets write.

Here are excerpts from a nationwide drive of news editorials to promote a free press and reject President Donald Trump’s drive to scapegoat journalists as “enemies of the people.” (Thanks to the many editors who e-mailed their editorials our way). The Boston Globe: “Replacing a free media with a state-run media has always been a first order of business for any corrupt regime taking over a country.” Greensboro (North Carolina) News & Record: President Trump “believes there should be restrictions on how your government and elected officials should be covered, that there should be prohibitions on that flow of information.

Freedom: 350 papers editorialize to preserve America’s free press. 'This is what we do' Free Media Are Not “The Enemy Of The People” Free media are not “the enemy of the people” – and that is precisely why they are under attack from politicians all over the world. Journalism and media accelerator programmes around the world. From Amazon, Apple, Comcast and AT&T: This is who owns the media today. The media landscape used to be straightforward: Content companies — studios — made stuff — TV shows and movies — and sold it to pay TV distributors, who sold it to consumers. Covering rural America: What reporters get wrong and how to get it right. Trump TV Is Live — And More On-Message Than The President. Why We Like Things That Are Bad For Us – Faris.

“Man shall not live by bread alone, but by every word that proceedeth out of the mouth of God” GOP voters trust CNN, N.Y. Times over Breitbart, InfoWars. Hold on to your tinfoil hat, Alex Jones. YouTube is coming for you. Trump's mind-numbing media manipulation machine. The press, branded the 'enemy' by Trump, increasingly trusted by the public: Reuters/Ipsos poll. 10 InfoWars Conspiracy Theories You Won't Believe Exist. Newsonomics: After John Oliver, the you-get-what-you-pay-for imperative has never been clearer. LA Times tops 100,000 in digital subscriptions - TheStreet.