Sign in - Google Accounts. Roads-api-samples/MainActivity.java at master · googlemaps/roads-api-samples. Android - How to put Google Maps V2 on a Fragment Using ViewPager. Android - What is the difference between Action Bar and newly introduced Toolbar? FragmentActivity.

How to get location and its updates in Google Maps Android API V2. Android Location Tracker with Google Maps - Java Tutorial Blog. This Android tutorial will walk you through to create a location tracker using Android location API and Google maps services. 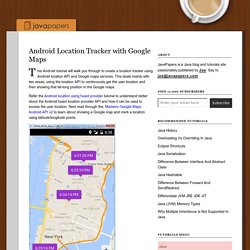 This deals mainly with two areas, using the location API to continuously get the user location and then showing that lat-long position in the Google maps. Refer the Android location using fused provider tutorial to understand better about the Android fused location provider API and how it can be used to access the user location. Next read through the, Markers–Google Maps Android API v2 to learn about showing a Google map and mark a location using latitude/longitude points. Creating and Monitoring Geofences. Geofencing combines awareness of the user's current location with awareness of the user's proximity to locations that may be of interest. 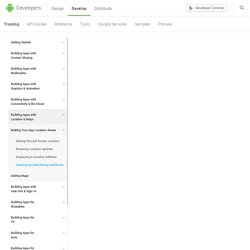 To mark a location of interest, you specify its latitude and longitude. To adjust the proximity for the location, you add a radius. The latitude, longitude, and radius define a geofence, creating a circular area, or fence, around the location of interest. You can have multiple active geofences, with a limit of 100 per device user. Google Maps Tracks API (Deprecated)   Java - Showing my track with Google map api v2 in android. Récupérer la localisation. Maps Android API v2. Maps Roads API Android. The Google Maps Roads API identifies the roads a vehicle was traveling along and provides additional metadata about those roads, such as speed limits. 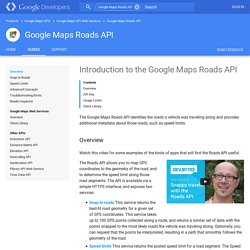 Overview Watch this video for some examples of the kinds of apps that will find the Roads API useful. The Roads API allows you to map GPS coordinates to the geometry of the road, and to determine the speed limit along those road segments. The API is available via a simple HTTPS interface, and exposes two services: Snap to roads This service returns the best-fit road geometry for a given set of GPS coordinates. API Key To get started using Google Maps Roads API, you need to create or select a project in the Google Developers Console and enable the API.

Alternatively, you can activate the Google Maps Roads API yourself in the Developers Console by doing the following: Go to Google Developers Console. In either case, you end up on the Credentials page where you can access your project's credentials. Usage Limits Users of the free API: Tuto Google Location API. Dependencies and prerequisites Google Play services client library (latest version) Android version 2.2 (API level 8) or later You should also read Set Up Google Play Services SDK One of the unique features of mobile applications is location awareness. 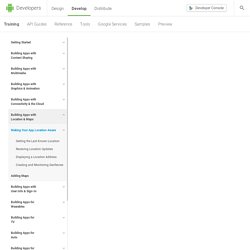 Samples Roads api. Doc Google Maps Location API. Doc Google Maps API. Calendar View in Android Example. Android provides calendar view widget that is ready to use one which fulfills our needs when we wish to display a calendar. 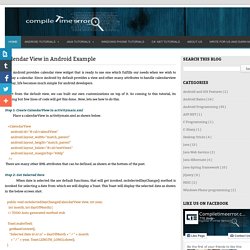 Since Android by default provides a view and other many attributes to handle calendarview display, life becomes much simple for android developers. Apart from the default view, we can built our own customizations on top of it. So coming to this tutorial, its nothing but few lines of code will get this done.. Now, lets see how to do this. Step 1: Create CalendarView in activitymain.xml Place a calendarView in activitymain.xml as shown below. <CalendarView android:id="@+id/calendView" android:layout_width="match_parent" android:layout_height="match_parent" android:layout_below="@+id/textView1" android:layout_marginTop="60dp" /> There are many other XML attributes that can be defined, as shown at the bottom of the post.