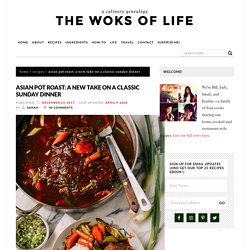 It’s a dish that conjures images of mom’s cooking, cozy Sunday dinners with family, and cold wintery weather. In other words, it’s the perfect thing to make for dinner right now, whether you’re looking for an easy Christmas meal or just a big vat of deliciousness for lunch or dinner any time this holiday week. My usual pot roast recipe is pretty traditional, involving red wine, herbs, and tomatoes. Today, though, I’m sharing a new “Asian Pot Roast” recipe, using many of the flavors from my own childhood. This Asian pot roast shares a lot in common with the versions you’re probably familiar with. The addition of ginger, scallions, and soy sauce give it an additional hint of “Asian” flavor, though the effect isn’t at all overpowering. 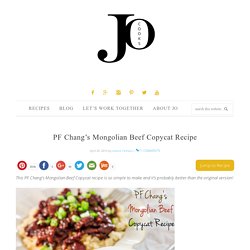 Many many years ago, OK maybe not that many, but when I used to work in Michigan I had a favourite restaurant. That restaurant was PF Chang’s. I used to love going there for lunch or dinner. It used to be in the mall, so whenever we’d go shopping at the mall we’d always stop by PF Chang’s. HAMBURGER STEAKS WITH ONION GRAVY – Easy Recipes. 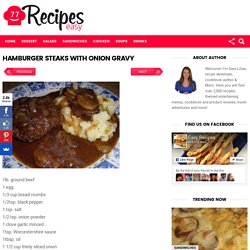 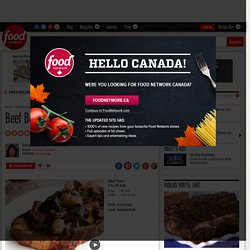 Preheat the oven to 250 degrees F. Heat the olive oil in a large Dutch oven. Add the bacon and cook over medium heat for 10 minutes, stirring occasionally, until the bacon is lightly browned. Remove the bacon with a slotted spoon to a large plate. Dry the beef cubes with paper towels and then sprinkle them with salt and pepper. Toss the carrots, and onions, 1 tablespoon of salt and 2 teaspoons of pepper in the fat in the pan and cook for 10 to 15 minutes, stirring occasionally, until the onions are lightly browned.

Combine 2 tablespoons of butter and the flour with a fork and stir into the stew. To serve, toast the bread in the toaster or oven. Copyright Ina Garten, All Rights Reserved. Shepherd's Pie Recipe. 1. 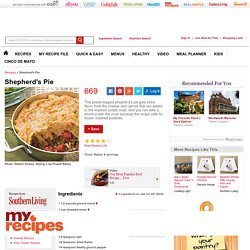 Brown beef in a large nonstick skillet over medium-high heat, stirring often, 10 minutes or until meat crumbles and is no longer pink. Remove ground beef from skillet using a slotted spoon; reserve 2 Tbsp. drippings in skillet. Reduce heat to medium. 2. Sauté onion, mushrooms, and garlic in hot drippings over medium heat 10 to 11 minutes or until tender. Pumpkin Meatloaf with Pumpkin BBQ Sauce. It’s no secret that I love pumpkin, but Matt on the other hand isn’t a pumpkinaholic. 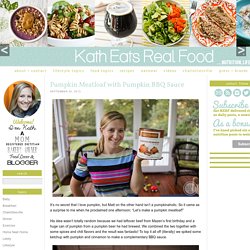 So it came as a surprise to me when he proclaimed one afternoon: “Let’s make a pumpkin meatloaf!” His idea wasn’t totally random because we had leftover beef from Mazen’s first birthday and a huge can of pumpkin from a pumpkin beer he had brewed. We combined the two together with some spices and chili flavors and the result was fantastic! Crockpot Meatloaf. See…I told y’all I’d be cooking in my crockpot more during this move! 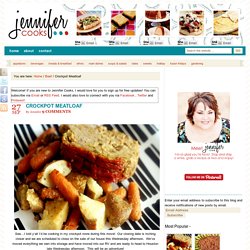 Our closing date is inching closer and we are scheduled to close on the sale of our house this Wednesday afternoon. We’ve moved everything we own into storage and have moved into our RV and are ready to head to Houston late Wednesday afternoon. This will be an adventure! Like I said in an earlier post, my crockpot will become my best friend in the kitchen over the next few weeks. It’s easier and doesn’t heat up the whole RV as much as firing up the oven and stove top. This is a very simple recipe that I usually make in the oven, but was super excited to see how well it turned out in the slow cooker.

Easy Slow Cooker BBQ Beef Brisket Recipe. I think doing it a day or two ahead is fine. 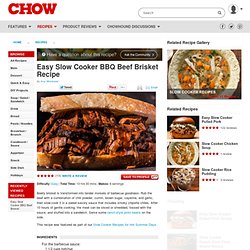 One thing I found is brisket releases a LOT of fat. And while I have nothing against fat there is way too much. Having time to chill and separate is great. If you do in the oven I would think 300 is good temp but if you have the time you can do 250. I would follow the instructions as is and RESIST constantly open the door to check. Once done take the meat out, let cool, wrap and refrigerate. Have fun at your party! One-Pot Beef Stroganoff with Egg Noodles Recipe.