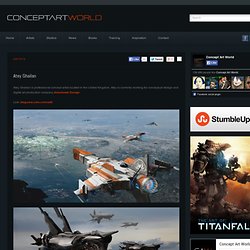 Atey is currently working for conceptual design and digital art production company Atomhawk Design. Link: blog.sina.com.cn/snatti All images used with permission by the artist. © Atey Ghailan or their respective copyright holder. Our Mecha Past: Impossible Fossils of the Mechazoic Era. Ten thousand years from now, archaeologists will stumble upon one of the most baffling sights they have ever seen. 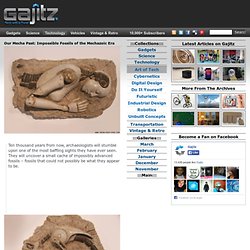 They will uncover a small cache of impossibly advanced fossils – fossils that could not possibly be what they appear to be. The objects appear similar to the robotic animals of the archaeologists’ day, but they clearly predate the contemporary iterations of these creatures. Is it possible that robots evolved into sentient, reproductive beings far earlier than the history books taught them? The fossils are actually the work of artist Chase Black. How to Make Elephant Toothpaste: 13 steps. Home version: 1/2 cup 20-volume hydrogen peroxide liquid (20-volume is a 6% solution, which can be found at a beauty supply store or hair salon)1 Tablespoon of dry yeast3 Tablespoons of warm waterLiquid dish washing soapFood coloringLab version: food coloringDawn detergent30% hydrogen peroxide (H202)saturated solution of potassium iodide (KI) Please be aware the concentrated hydrogen peroxide (greater than the household 3%) is a strong oxidizer. 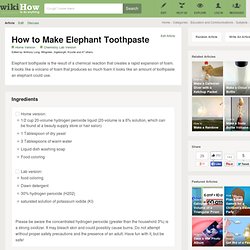 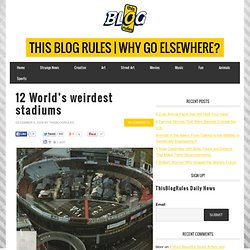 Stadiums give pride to the countries where they are located. Yet there are some stadiums where architects have failed and there are some very clever adaptations to the surrounding landscape and that makes them kinda weird. Japan, Osaka stadium, former home ground of baseball team Nankai Hawks. The stadium situated in center of Osaka City, with capacity of 31379 seats.

In 1988, The Hawks’ owner company sold the team to Daiei Group and moved to Fukuoka City. Um, Maybe You Shouldn't Have Hidden From the Zombies in That Church... I keep posting in these but of course you keep deleting my opinions. 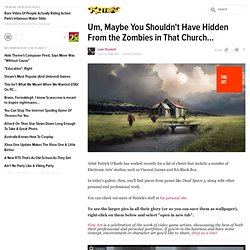 You can't just change the definition of the phrase "fine art" because you like this art. It's skilled art, it's great art, hell maybe it's even "high art," but fine art is a thing and this is not that thing. That doesn't mean it's less creative or beautiful than other art, but it is not fine art. How Bill Nye Became The Science Guy. And A Ballet Shoe Inventor. And a Political Voice. When Bill Nye tells a story about getting hit in the head, he stops to remind you about inertia, “a property of matter.” 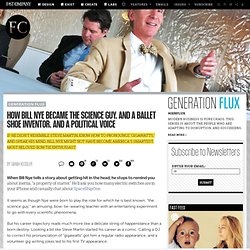 He’ll ask you how many electric switches are in your iPhone and casually chat about SpaceShipOne. It seems as though Nye were born to play the role for which he is best known: “the science guy,” an amusing, bow-tie-wearing teacher with an entertaining experiment to go with every scientific phenomena. But his career trajectory reads much more like a delicate string of happenstance than a born destiny. Looking a bit like Steve Martin started his career as a comic. High-Speed Photography Turns Water Droplets Into Liquid Sculptures. The water droplet is the quintessential cliché of high-speed photography. 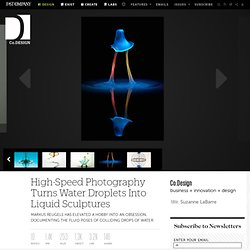 Any Internet search will produce a dizzying number of bursting and rippling liquid surfaces. Yet in the right hands, even the familiar can be extraordinary. Markus Reugels, a German amateur photographer who has perfected the theme, has produced an exhaustive catalog of his favorite subject captured in every conceivable, fleeting pose.

What began as an ordinary domestic exercise--taking pictures for the family album--has become a “lovely hobby,” involving many hours of trial and error using instructions gleaned from the Internet. How Many 5 Year-Olds Could You Fight? Travel INSIDE a Black Hole. Arrested Decision 2012. MaqrkqvgzG1qdr920.jpg (462×618) Laser Pointer. Rudyao on deviantART. F Yeah Xena!: Archive. PixieGirl4's Photostream. Deadendthrills: Not enough pretty pictures? Motion graphics eXchange. The New York pizza guide, from old-school slices to nouveau pies. 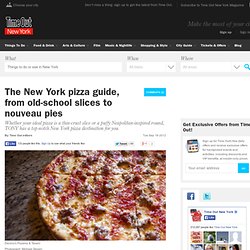 Patsy’s, Totonno’s and other New York pizza greats still carry on the tradition for classic versions. Reviews, guides, things to do, film - Time Out New York. Cookies, bars + brownies / smores cookies. Crack a Combination Bike Lock in Under 30 Seconds. Learn to Pick Locks for Fun and an Increased Understanding of Security. Humor Train. Leap Motion. Kiss Your Keyboard and Mouse Goodbye With The Leap. Since Steven Spielberg expertly crafted it a decade ago, the world has been clamoring for a user interface similar to what was found in sci-fi thriller Minority Report. 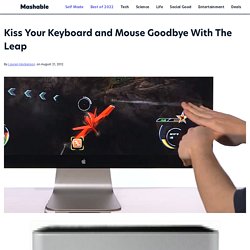 Even the inkling of flipping through applications and swiping screens in mid-air made geeks tingle all over, but aside from expertly developed hacks on the Xbox Kinect, nothing definitive seemed to break through and truly give the public that enticing functionality of the future. That is, until now. After more than five years of development, a proprietary technology has emerged that synthesizes the shape and movement of the human hand to produce movement onto a computer.

It's called The Leap — and for an astonishingly low price of $70, you can begin to control a computer with nothing more than your hands, as early as next February. Mashable spoke with Buckwald about the journey his company took to develop The Leap and bring it to market, as well as an inside look on how it works and what we can expect come February. Australian Denis Smith's Ball of Light Photography. How to Customize Your iPhone, Inside and Out. Untitled. Firevine comments on What's something that is common knowledge at your work place that will be mind blowing to the rest of us? Avoid Any "Awkward Silence" With This 1 Bizarre Trick - How Do I Talk To A Girl. What makes an average looking guy instantly become "hot"? - How Do I Talk To A Girl. 47 Mind-Blowing Psychology-Proven Facts You Should Know About Yourself. I’ve decided to start a series called 100 Things You Should Know about People.

As in: 100 things you should know if you are going to design an effective and persuasive website, web application or software application. Or maybe just 100 things that everyone should know about humans! The order that I’ll present these 100 things is going to be pretty random. So the fact that this first one is first doesn’t mean that’s it’s the most important.. just that it came to mind first. Dr. DeviantART: where ART meets application! Ravine-together we stand invincible by ~nebezial on deviantART. Artwork.jpg (500×750) Drow Ranger - DotA2 by. Mekanizer by *Shiramune on deviantART. Lina - DotA2 by. 23 Dramatic Photos of Dreams. Amazing photos 2012. The Korean art galleries that add eye-popping optical tricks to tourists' holiday snaps. By Chris Parsons Published: 13:20 GMT, 2 July 2012 | Updated: 15:23 GMT, 2 July 2012 Propping up the Leaning Tower of Pisa or hanging from a cliff face are not what most most would expect when visiting the average art gallery or museum.

But not content with simply looking at works of art, visitors to this bizarre museum in Busan, South Korea are able to 'interact' with the pieces thanks to mind-bending optical illusions. Anyone wondering what they would look like walking on a tightrope or held in the grip of a giant snake can find out in the 'Trick Eye' Museum, which uses cleverly manipulated paintings to really put visitors in the picture.

iDdWH.jpg (1600×1071) BRS fanart - Black Web Trapper by *sinlaire on deviantART. Amazing Snake Skin Desktop Backgrounds. Droplet Collisions at 5000fps - The Slow Mo Guys. #FantasyFans101 deviantART Gallery. Alone on the Road - V2 by *Grivetart on deviantART. Alone_on_the_road___v2_by_grivetart-d4o49nr. 9 Beautiful Objects Crafted from Copper. Cosplay of the Day. Humans Have a Lot More Than Five Senses. Today I found out humans have a lot more than five senses. It turns out, there are at least nine senses and most researchers think there are more like twenty-one or so.

Just for reference, the commonly held definition of a “sense” is “any system that consists of a group of sensory cell types that respond to a specific physical phenomenon and that corresponds to a particular group of regions within the brain where the signals are received and interpreted.” The commonly held human senses are as follows: Sight: This technically is two senses given the two distinct types of receptors present, one for color (cones) and one for brightness (rods).Taste: This is sometimes argued to be five senses by itself due to the differing types of taste receptors (sweet, salty, sour, bitter, and umami), but generally is just referred to as one sense.

For those who don’t know, umami receptors detect the amino acid glutamate, which is a taste generally found in meat and some artificial flavoring. 2011- SOULCALIBUR-CASSANDRA by ~Vandrell on deviantART. Tara_likeness_compass_shot_by_stripwalker-d32wu8o.jpg (1600×573) Thoughthelmet. Broadcast Yourself. EA SPORTS SSX: This is SSX! Make The Girl Dance 'Baby Baby Baby'.

With over 10 years at the forefront of the CG industry, reporting on the latest movie VFX, with enviable studio access and in-depth video and step-by-step training, 3D World offers unrivalled inspiration and training every issue. Editorial Advertising. El Salvador Fire Fight. Unleash Your Fingers. Daydream of A Penspinner. 91Ho.gif (400×225) This Cute Sea Snail Can Eat a Fish Three Times Its Size and Kill Humans.