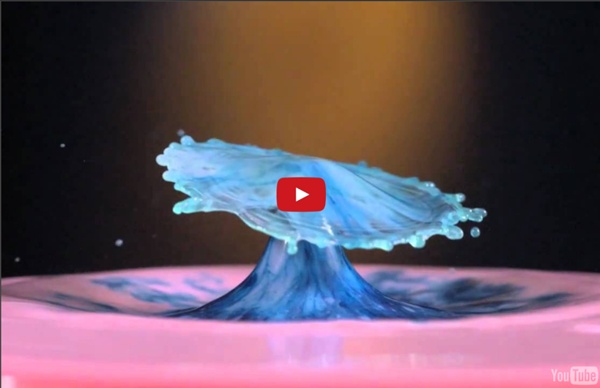 Firevine comments on What's something that is common knowledge at your work place that will be mind blowing to the rest of us? Reclaiming 'intelligent design' with stunning photos Laura Blue, contributor (Image: Christophe Gissinger/Princeton University) The Art of Science contest at Princeton University has a simple goal: to show off the most beautiful and coolest of all images produced at the university in the course of scientific research. Whether mapping neurons or photographing the field coils of an electrical generator, a scientist rarely sets out with a strong aesthetic vision for his or her work; the purpose is not to create something that looks good. This year’s 168 entries come from researchers and students in fields ranging from ecology to mechanical engineering. The winner this year is entitled Chaos and Geomagnetic Reversals, by physicist Christophe Gissinger. The second-place entry is Tree, by electrical engineering student Zhen James Xiang. The third-place entry, Dust to Dust, to Planets? This year contest organisers chose the theme "intelligent design" - a rubric they confess was intentionally picked to be provocative.

Art of Science / 2011 Gallery Art of Science 2011 Gallery About | Page 1 | Page 2 | Page 3 Click the thumbnail images below to learn about the science behind the art. About | 2011 Gallery | 2010 Gallery | 2009 Gallery | 2006 Gallery | 2005 Gallery | Press | Contact Design by Jonathan Harris and Grady Klein. The Korean art galleries that add eye-popping optical tricks to tourists' holiday snaps By Chris Parsons Published: 13:20 GMT, 2 July 2012 | Updated: 15:23 GMT, 2 July 2012 Propping up the Leaning Tower of Pisa or hanging from a cliff face are not what most most would expect when visiting the average art gallery or museum. But not content with simply looking at works of art, visitors to this bizarre museum in Busan, South Korea are able to 'interact' with the pieces thanks to mind-bending optical illusions. Anyone wondering what they would look like walking on a tightrope or held in the grip of a giant snake can find out in the 'Trick Eye' Museum, which uses cleverly manipulated paintings to really put visitors in the picture. Trick of the eye: This cleverly-adapted artwork gives the impression the tourist is pouring a bucket of water towards the painting Interactive: A visitor appears to be painting the toenails of the century-old subject in this mind-bending artwork Walking the line: A seemingly daring tourist takes to a high rope in this clever optical illusion painting

Art of Science 2011 Gallery The Art of Science exhibition explores the interplay between science and art. These practices both involve the pursuit of those moments of discovery when what you perceive suddenly becomes more than the sum of its parts. Each piece in this exhibition is, in its own way, a record of such a moment. This is the fifth Art of Science competition hosted by Princeton University. The 56 works chosen for the 2011 Art of Science exhibition represent this year’s theme of “intelligent design” which we interpret in the broadest sense. The magnetic field of the Earth has reversed its polarity several hundred times during the past 160 million years. This image shows a simple deterministic model illustrating the geomagnetic reversals. As part of my research I am designing intelligent image decomposition algorithms that split an image into sub-images in a way that best captures important image structure. The algorithm used here recursively cuts an image into smaller rectangular pieces.

Kiss Your Keyboard and Mouse Goodbye With The Leap Since Steven Spielberg expertly crafted it a decade ago, the world has been clamoring for a user interface similar to what was found in sci-fi thriller Minority Report. Even the inkling of flipping through applications and swiping screens in mid-air made geeks tingle all over, but aside from expertly developed hacks on the Xbox Kinect, nothing definitive seemed to break through and truly give the public that enticing functionality of the future. That is, until now. "We really wanted to build a device that would actually be leaps and bounds better at doing a lot of things that most people want to do with their computers," says Leap Motion CEO Michael Buckwald. Mashable spoke with Buckwald about the journey his company took to develop The Leap and bring it to market, as well as an inside look on how it works and what we can expect come February. Are you excited about the possibilities brought by The Leap? How The Leap Was Born How it Works The Future of Touch

NASA Releases Visual Tour of Earth's Fires NASA Releases Visual Tour of Earth's Fires NASA has released a series of new satellite data visualizations that show tens of millions of fires detected worldwide from space since 2002. The visualizations show fire observations made by the MODerate Resolution Imaging Spectroradiometer, or MODIS, instruments onboard NASA's Terra and Aqua satellites. NASA maintains a comprehensive research program using satellites, aircraft and ground resources to observe and analyze fires around the world. "What you see here is a very good representation of the satellite data scientists use to understand the global distribution of fires and to determine where and how fire distribution is responding to climate change and population growth," said Chris Justice of the University of Maryland, College Park, a scientist who leads NASA's effort to use MODIS data to study the world's fires. One of the new visualizations takes viewers on a narrated global tour of fires detected between July 2002 and July 2011.

47 Mind-Blowing Psychology-Proven Facts You Should Know About Yourself I’ve decided to start a series called 100 Things You Should Know about People. As in: 100 things you should know if you are going to design an effective and persuasive website, web application or software application. Or maybe just 100 things that everyone should know about humans! The order that I’ll present these 100 things is going to be pretty random. Dr. <div class="slide-intro-bottom"><a href=" Florida Rare halos "Yesterday [Saturday Nov 12] I observed a great display with 14 halos! I was walking around downtown Jacksonville and noticed a band of cirrus clouds on the horizon. I had an odd feeling they would make good halos, and I was right. At first it made a weak sundog, and some segments of the parhelic circle. However, when I was back home the display really escalated. There was a splendid upper tangent arc and a Parry arc and in between them, a faint Lowitz arc! I looked at the sky with a convex mirror and there was also a Wegener arc, both sides of the sky, and even a 46 degree halo and both infralateral arcs. This was a great day to end a drought of good halos! The upper Lowitz arcs curving upwards, crossing the upper tangent arc and touching the Parry arc are a rare sighting. Lowitz arcs localised near the UTA could arise from specially oriented hexagonal column crystals rather than plates.

Humans Have a Lot More Than Five Senses Today I found out humans have a lot more than five senses. It turns out, there are at least nine senses and most researchers think there are more like twenty-one or so. Just for reference, the commonly held definition of a “sense” is “any system that consists of a group of sensory cell types that respond to a specific physical phenomenon and that corresponds to a particular group of regions within the brain where the signals are received and interpreted.” The commonly held human senses are as follows: Sight: This technically is two senses given the two distinct types of receptors present, one for color (cones) and one for brightness (rods).Taste: This is sometimes argued to be five senses by itself due to the differing types of taste receptors (sweet, salty, sour, bitter, and umami), but generally is just referred to as one sense. For those who don’t know, umami receptors detect the amino acid glutamate, which is a taste generally found in meat and some artificial flavoring. Bonus Facts:

La Cassiopea & Caustics Caustics are Nature’s ‘focussing’, quite different from that laboriously achieved by our multi-element lenses. Caustics play and dance. They are ever moving and yet are always sharp with strangely permanent and stable forms that we recognise and yet find hard to define. In contrast our lenses are fragile, they lose their focus with the slightest shift of an element or the CCD plane, their focus is unstable in the sense that caustics are robust and strongly stable. Caustics mark spatial discontinuities in light ray behaviour. The intersection of the caustic surfaces with the sea bed gives the bright dancing lines and patterns. Cosplay of the Day Most Upvoted 1229 votes This Couple Had Their Priest Sing at Their Wedding, But They Weren't Expecting Him to Belt Out Such an Awesome Cover of 'Hallelujah' 1042 votes We Weren't All Born to Give High Fives 625 votes This 78-Year-Old Granny Has the Reaction to Roller Coasters We Can All Relate to 604 votes Dad Records a Vine Every Saturday Morning For Three Months 397 votes We've All Been There, Vending Machine Share Tweet Email Cosplay of the Day Favorite By Unknown Share: 18 EDI from Mass Effect 3. Reposted by More From Cheezburger From Around the Web Recommended by Cheezburger Comments garebear Camel toe included? User ID: J-Spot I'd red, blue, or green choice that. User ID: social networking by Facebook Comments Featured Hot Today Why Google Will Always Be Better Than Bing Because is Batman Bad Screenshots From Otherwise Good Looking Video Games r/photoshopbattles Had Fun With the Picture of Hillary Clinton ... Harness Those Sweater Puppies

Magellan & Airglow The Milky Way spans the sky accompanied by the dwarf galaxies of the Magellanic Clouds. Suffusing all is a much closer light, ‘airlight’ from our own upper atmosphere. The green and red banded glow is produced by atoms and molecules whose exitation derives ultimately from daytime far ultra violet radiation. The green light is from excited oxygen atoms radiating to a lower excited state (O 1S to 1D) at an altitude of 90 – 100km (56 - 62 miles). The narrow altitude range is the result of competition between the slow radiative decay (~1s) and de-excitation by collisions coupled with the variation of atomic oxygen concentration with height. The red glow is possibly from OH radicals. The upper atmosphere is perturbed by gravity waves emanating from disturbances at lower levels. To see airglow demands a long dark adaption and a moonless sky free of light pollution.