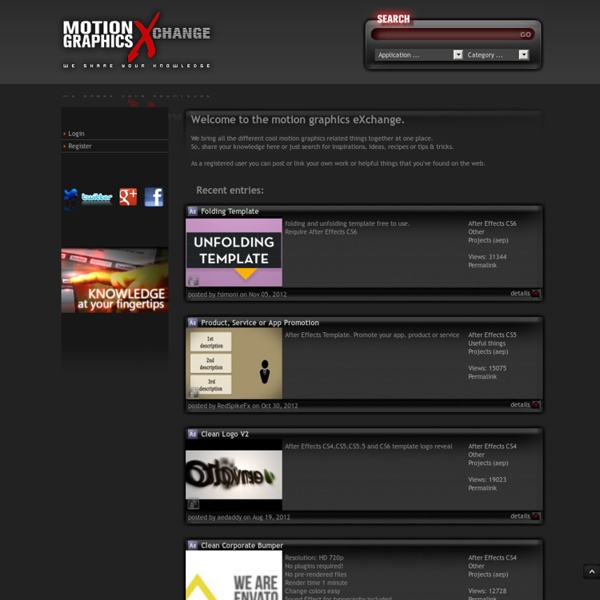 Top CG animated shorts you must see 3D World is the best-selling international magazine for CG artists, covering the fields of animation, VFX, games, illustration and architecture. Our team of CG artists and professionals provide analysis of latest trends in the market, artistic and technical advice, impartial product reviews, and exclusive behind-the-scenes articles on the making of key projects in this fast-paced industry. 3D World’s unique Advisory Board, which includes ILM’s Tim Alexander, Pixar’s Andrew Gordon and Ubisoft’s Pascal Blanche are on hand every issue to help with CG advice and career support.

vj labor Elektra, Montreal 2013 (Yatra Arts) from Joel Dittrich on Vimeo. Live audio/visual performance at Elektra festival, Montreal, Canada, 03 may 2013. Curated by Yatra Arts. White Noise/Black Noise is an audio/visual project where I´m experimenting with intermodal aesthetics, creating audio and visuals side by side and performing live with a digital set up, relaying heavily on OSC, MIDI and audio analysis, to control audio and visuals simultaneously. 100% work by me. Expressions - Geometry Circular Functions As we mentioned in the previous section, there's a close relationship between the trigonometric functions and circles—so close that some older textbooks call these functions 'circular functions'. One reason for this relationship is that the set of all right triangles with the same hypotenuse forms a circle, with the hypotenuse defining its radius. As you can see, the perpendicular sides of the right triangles correspond to the X- and Y-coordinates of points on the circle, relative to the circle's center. We therefore can use the trigonometric functions to find the coordinates of points on a circle, in the same way we found the length of an unknown side of a right triangle, above:

The Korean art galleries that add eye-popping optical tricks to tourists' holiday snaps By Chris Parsons Published: 13:20 GMT, 2 July 2012 | Updated: 15:23 GMT, 2 July 2012 Propping up the Leaning Tower of Pisa or hanging from a cliff face are not what most most would expect when visiting the average art gallery or museum. But not content with simply looking at works of art, visitors to this bizarre museum in Busan, South Korea are able to 'interact' with the pieces thanks to mind-bending optical illusions. Anyone wondering what they would look like walking on a tightrope or held in the grip of a giant snake can find out in the 'Trick Eye' Museum, which uses cleverly manipulated paintings to really put visitors in the picture. Trick of the eye: This cleverly-adapted artwork gives the impression the tourist is pouring a bucket of water towards the painting

GreyScale Congratulations to Michael Rinnan for winning the Five Second Project for March. His entry had a great concept and was outfitted with excellent lighting, atmosphere, camera movements and sound design. We wanted to know a little bit more about Michael’s entry, so we asked him a few questions regarding his workflow and the process for creating his winning piece. Where do you work? What is your title? Tell us about what you do at your company.

Kiss Your Keyboard and Mouse Goodbye With The Leap Since Steven Spielberg expertly crafted it a decade ago, the world has been clamoring for a user interface similar to what was found in sci-fi thriller Minority Report. Even the inkling of flipping through applications and swiping screens in mid-air made geeks tingle all over, but aside from expertly developed hacks on the Xbox Kinect, nothing definitive seemed to break through and truly give the public that enticing functionality of the future. That is, until now. After more than five years of development, a proprietary technology has emerged that synthesizes the shape and movement of the human hand to produce movement onto a computer. optimizing for performance: Adobe Premiere Pro and After Effects This post collects resources relating to optimizing your computer system and After Effects and Premiere Pro so that you can get the most done in the least time with these applications. If you have any questions, please bring them to the After Effects forum or the Premiere Pro forum. It’s much harder to have a conversation in the comments of a blog post than on the forum. We recently released a white paper about configuring or upgrading a workstation for video software, including After Effects, Premiere Pro, SpeedGrade, and Photoshop Extended.

50+ Most Amazing Adobe After Effects Tutorials You Need to Learn Adobe After Effects is commonly used for creating visual effects and motion graphics. It allows users to animate, alter, and composite media in 2d and 3d space with various built-in tools and third party plug-ins. This software is really amazing and powerful. It’s even more interesting if you have some tutorials to start learning. In this post, we collected the best Adobe After Effects tutorials and feature it in here. 47 Mind-Blowing Psychology-Proven Facts You Should Know About Yourself I’ve decided to start a series called 100 Things You Should Know about People. As in: 100 things you should know if you are going to design an effective and persuasive website, web application or software application. Or maybe just 100 things that everyone should know about humans! The order that I’ll present these 100 things is going to be pretty random. So the fact that this first one is first doesn’t mean that’s it’s the most important.. just that it came to mind first.

Realistic Bounce and Overshoot Goldfish don't bounce. —Bart Simpson Sometimes you may want to embellish your animated motions with a bit of physical realism. For example, you may have a layer quickly scale up from zero to 100 percent and you want to add a little overshoot and oscillation and have it finally settle in at 100 percent. Pixelart QC Tutorials Best Quartz Composer Tutorials Quartz Composer is a powerful tool for processing and rendering graphical data. You can use it easily for manipulating any type of graphics in real time. It uses node based visual programming language and can be easily adopted by non-programmer due to it simplicity. It uses OpenGL, OpenCL in new Mac OS X, Core Image, Core Video, JavaScript, and other technologies. You can drag and drop, link nodes and play with values to create amazing graphics.