Humans Have a Lot More Than Five Senses 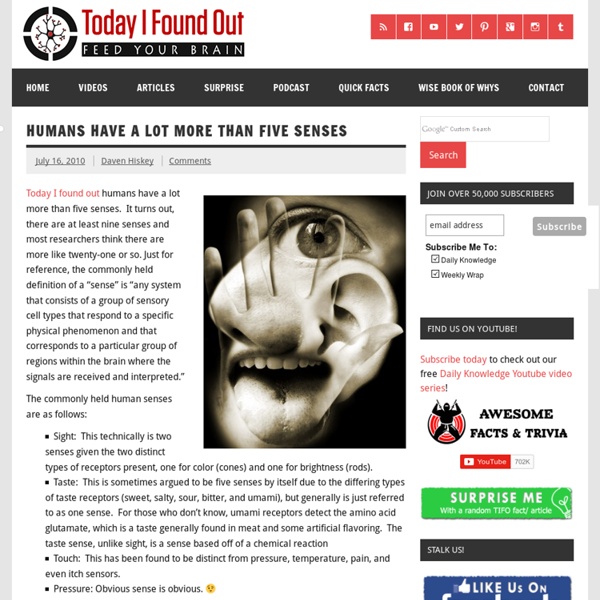 Today I found out humans have a lot more than five senses. It turns out, there are at least nine senses and most researchers think there are more like twenty-one or so. Just for reference, the commonly held definition of a “sense” is “any system that consists of a group of sensory cell types that respond to a specific physical phenomenon and that corresponds to a particular group of regions within the brain where the signals are received and interpreted.” The commonly held human senses are as follows: Sight: This technically is two senses given the two distinct types of receptors present, one for color (cones) and one for brightness (rods).Taste: This is sometimes argued to be five senses by itself due to the differing types of taste receptors (sweet, salty, sour, bitter, and umami), but generally is just referred to as one sense. For those who don’t know, umami receptors detect the amino acid glutamate, which is a taste generally found in meat and some artificial flavoring. Bonus Facts:

Mind machine - Wikipedia A light and sound machine with headphones and strobe light goggles. A mind machine (aka brain machine or light and sound machine) uses pulsing rhythmic sound, flashing light, electrical or magnetic fields, or a combination of these, to alter the frequency of the user's brainwaves.[1] Mind machines can induce deep states of relaxation,[2] concentration,[3] and in some cases altered states of consciousness,[4] which have been compared to those obtained from meditation and shamanic exploration.[5] Photic mind machines work with flickering lights embedded in sunglasses. The process applied by some of these machines is said to induce brainwave synchronisation or entrainment.[6] History[edit]

What It Feels Like to Be an Octopus On a recent Sunday, at my local Italian market, I considered the octopus. To eat the tentacle would be, in a way, like eating a brain—the eight arms of an octopus contain two-thirds of its half billion neurons. Delicious for some, yes—but for others, a jumping off point for the philosophical question of other minds. “I do think it feels like something to be an octopus,” says Peter Godfrey-Smith, a professor of philosophy at CUNY Graduate Center, who has spent almost a decade considering the idea. Stories of octopuses’ remarkable ability to solve puzzles, open bottles, and interact with aquarium caretakers, suggest an affinity between their intelligence and our own.

Alan Cohen Programs & Publications "The daily quotes are simply wonderful. Starting my day with your quote is like taking a deep breath of purified air." “What a treat it is to listen to your interviews. Why the modern world is bad for your brain Our brains are busier than ever before. We’re assaulted with facts, pseudo facts, jibber-jabber, and rumour, all posing as information. Trying to figure out what you need to know and what you can ignore is exhausting. At the same time, we are all doing more. Thirty years ago, travel agents made our airline and rail reservations, salespeople helped us find what we were looking for in shops, and professional typists or secretaries helped busy people with their correspondence. Now we do most of those things ourselves.

evidence Healing at a Distance Astin et al (2000). The Efficacy of “Distant Healing”: A Systematic Review of Randomized Trials Leibovici (2001). Effects of remote, retroactive intercessory prayer on outcomes in patients with bloodstream infection: randomised controlled trial Krucoff et al (2001).Integrative noetic therapies as adjuncts to percutaneous intervention during unstable coronary syndromes: Monitoring and Actualization of Noetic Training (MANTRA) feasibility pilot Radin et al (2004). Possible effects of healing intention on cell cultures and truly random events. What Happens After A Lack of Oxygen to the Brain? Not all brain injuries involve a blow to the head or lesion. Indeed, your brain can be injured even when nothing comes into contact with your head. Anoxic brain injuries occur when the brain is deprived of oxygen.

Are Many Buttes Giant Prehistoric Tree Stumps? This article has some very interesting and controversial information. Because of this, I encourage you to use your intuition and critical thinking skills to discern the information. – Pao Chang By SecretEnergy.com Translated from www.kramola.info/vesti/letopisi-proshlogo/na-zemle-lesov-net Adults and children do not share the same perception. And why? Excitation and Inhibition: The Yin and Yang of the Brain - Knowing Neurons To make a working nervous system, only two forces are necessary: excitation and inhibition. Excitatory signaling from one cell to the next makes the latter cell more likely to fire. Inhibitory signaling makes the latter cell less likely to fire. At chemical synapses in the brain, glutamate and GABA (gamma-aminobutyric acid) are transmitters for excitation and inhibition, respectively. Admittedly, their names don’t quite evoke symmetry — one being evocative of cheap food seasoning and the other of a Swedish pop band. Yet, glutamate and GABA are the Ying and Yang of the brain.