2019 soal report final accessible. Designing Libraries - Designing the school library. Design innovation in school libraries. Where am I going to put the library? 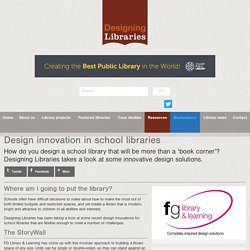 Schools often have difficult decisions to make about how to make the most out of both limited budgets and restricted spaces, and yet create a library that is modern, bright and attractive to children of all abilities and interests. Designing Libraries has been taking a look at some recent design innovations for school libraries that are flexible enough to meet a number of challenges. The StoryWall. A(z) four-space-model kifejezés keresési találatai. Zones and spaces - MODEL PROGRAMME FOR PUBLIC LIBRARIES. All libraries are different. 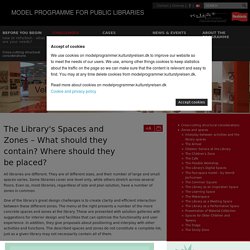 They are of different sizes, and their number of large and small spaces varies. Some libraries cover one level only, while others stretch across several floors. Planning and designing library buildings and services. The importance of school libraries in the Google Age – Scootle Lounge. This article was originally published in the Term 3, 2016 edition of SCIS’s Connections journal. 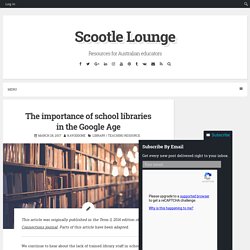 Parts of this article have been adapted. We continue to hear about the lack of trained library staff in schools, despite ongoing research indicating that the presence of teacher librarians leads to improved learning outcomes. Kay Oddone highlights the many benefits teacher librarians can bring to the wider school, and why their role is integral to the learning of both students and staff. In Australia, access to the internet is almost ubiquitous. In 2014–15, 85% of the Australian population aged 15 years and over were internet users, with 99% of people aged 15–17 using the internet.

Fortunately, in Australia almost all schools still have a library — and thanks to the Building the Education Revolution funding which prioritised school libraries in primary schools, many are quite new. The situation is dire, but the battle is not over yet. A „harmadik tanár” 1503 Salford Uni Report DIGITAL. Cologne public library in Kalk - Aatvos. Slik ser Biblo Tøyen ut! URBANSCREEN. We developed an installation for the Stadtteilbibliothek Köln-Kalk that enables visitors to engage with digital media in a novel and playful way. 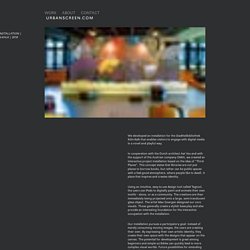 In cooperation with the Dutch architect Aat Vos and with the support of the Austrian company OMAi, we created an interactive project installation based on the idea of “Third Places”. This concept states that libraries are not just places to borrow books, but rather can be public spaces with a feel-good atmosphere, where people like to dwell. A place that inspires and creates identity. Using an intuitive, easy-to-use design tool called Tagtool, the users use iPads to digitally paint and animate their own motifs – alone, or as a community. The creations are then immediately being projected onto a large, semi-translucent glass object. Our installation pursues a participatory goal: instead of merely consuming moving images, the users are creating their own. What is the role of libraries in the digital age.

Lehet-e a könyvtár „next-gen”? Gondolatok a tartalomszolgáltatás és könyvtár 4.0-ról: a virtuális és a kiterjesztett valóság. How to Create the 21st-Century School Library of Your Dreams. By Margaret Sullivan This article first appeared in the April 2011 issue of School Library Journal Ebooks, apps, and the web are now a part of your student’s daily lives. 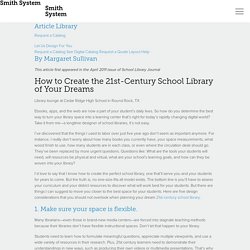 So how do you determine the best way to turn your library space into a learning center that’s right for today’s rapidly changing digital world? Take it from me—a longtime designer of school libraries, it’s not easy. I’ve discovered that the things I used to labor over just five year ago don’t seem as important anymore. I’d love to say that I know how to create the perfect school library, one that’ll serve you and your students for years to come. 1.

Many librarians—even those in brand-new media centers—are forced into stagnate teaching methods because their libraries don’t have flexible instructional spaces. Bcpslis / Transforming School Library Spaces. Library Spaces - BVSD 21st Century Librarians. Library Spaces - BVSD 21st Century Librarians. How to Create the 21st-Century School Library of Your Dreams. Finland has just given itself a 100th birthday present: a library. Imagine a country that is home to some internationally famous tech companies. 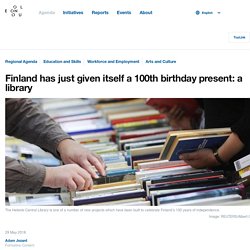 Now, imagine this digitally advanced nation also has one of the highest broadband speeds in the world; by 2021 almost 86% of its population is expected to own a smartphone. And then, think about how this country will plan to celebrate the centenary of its escape from the shadow of foreign rule: next, imagine a gleaming building filled with books. Because Finland – which ranked second in the World Economic Forum’s 2016 Network Readiness Index – aims to mark the 100th anniversary of its independence from Russia by opening a brand new library. The Helsinki Central Library, also called Oodi, scheduled to open in December 2018, will not only house books.

The building will also boast a cinema, a recording studio, and a space where old objects can be refashioned into new items. Artist’s impression of the design for the children’s area of the Helsinki Central Library. Image: ALA Architects Share. Relocated Newcastle Library to offer new technology... but there will be fewer books - Stoke-on-Trent Live. A town’s relocated library will boast new hi-tech IT equipment, including tablets, a 3D printer and Raspberry Pi computers – but fewer books. 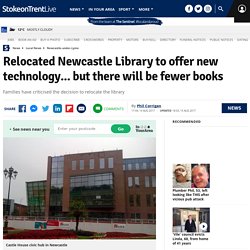 Newcastle Library will move from its current location in Ironmarket to the new £15.4 million Castle House civic hub in October, with the new facility having a greater emphasis on technology. But the library, which will occupy the ground and first floor of Castle House, will be almost a third smaller in terms of public area. And fewer books will be on display – although borrowers in Newcastle will still be able to access the one million books stocked by the county’s library service. 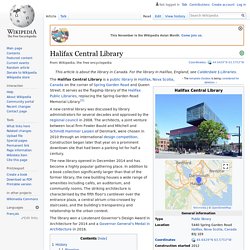 It serves as the flagship library of the Halifax Public Libraries, replacing the Spring Garden Road Memorial Library.[1] Innovation Lab, Community Space Power Change at Cushing Academy - Grant Lichtman. At most schools I have visited on this journey I move, visit, peer into classes, talk with different groups of faculty and staff and students. 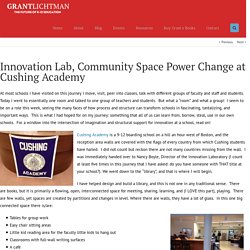 Today I went to essentially one room and talked to one group of teachers and students. But what a “room” and what a group! I seem to be on a role this week, seeing the many faces of how process and structure can transform schools in fascinating, tantalizing, and important ways. Steven Johnson: Where good ideas come from. The Fisher-Watkins Library at Cushing Academy. A sokarcú iskolai könyvtár by Kinga Iványiné Nagy on Prezi. Michael Bierut: How to design a library that makes kids want to read.

Defining The Modern School Library. May 23, 2016 By Katy Bainbridge Gone are the days of the librarian reminding kids to keep it down. 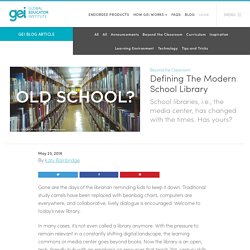 Traditional study carrels have been replaced with beanbag chairs, computers are everywhere, and collaborative, lively dialogue is encouraged. AASL Standards Framework for Learners pamphlet. School Libraries. School libraries and librarians are vital to the educational community. The school library is a unique and essential part of the learning community, and when led by a qualified school librarian, prepares all learners for college, career, and life. ALA President Jim Neal writes, “School libraries are about innovative technologies and creative spaces. Through school libraries, students understand issues like privacy, confidentiality, intellectual freedom, open access, fair use, and how these relate to their work as learners. Students view libraries as a positive and essential part of their lives.” Collaborate is one of the six Shared Foundations that anchor the AASL Standards Integrated Framework. The Every Student Succeeds Act (ESSA), signed by President Obama in 2015, reauthorized the Elementary and Secondary Education Act and replaced the No Child Left Behind version passed in 2002.

21st-Century Libraries: The Learning Commons. Libraries have existed since approximately 2600 BCE as an archive of recorded knowledge. From tablets and scrolls to bound books, they have cataloged resources and served as a locus of knowledge. Today, with the digitization of content and the ubiquity of the internet, information is no longer confined to printed materials accessible only in a single, physical location.

NPR Choice page. Libraries - Stephen Perse Foundation. A library is one of the first learning spaces that comes to mind when we consider where kids learn. The smell of books evokes memories of our own time spent browsing the titles and working out the, often complicated catalogue system... Fast forward to today's library. A Stephen Perse library. Bright, fresh colours help stimulate young minds. Technology opens up opportunities to further resources and rather than somewhere that is silent, here they buzz with activity. How a School Library Increased Student Use by 1,000 Percent. Learn About Important Trends. Libraries are constantly evolving to meet the needs of their diverse communities.

Far from being a simple repository of books and media, today’s libraries serve as invaluable resources for everything from data analytics to 3-D printing and beginning lessons in coding. In 2018 and beyond, it’s critical for the modern library to take in the changing faces of its patrons and respond accordingly. Every demographic is different, but there are countless ways that the modern library can respond to recent trends and offer information and resources that are both innovative and relevant to its users.

Technology Image ALT Text: A robotic hand prototype. According to the American Library Association Top Technology Trends resource, libraries worldwide spend $1.8 billion on technology. Makerspaces can serve many valuable purposes including: Library science professionals must strive to develop makerspaces and other technology labs that cater to the distinct needs of their demographics. The best in contemporary school libraries. Innovative library designs were celebrated this evening when St Joseph’s Nudgee College was named the inaugural winner in the schools category of the Library Design Awards 2017. Run by the Australian Library and Information Association (ALIA), the awards were created to showcase and celebrate the best in contemporary library interiors and exteriors in Australia.

Winners were announced at the ALIA Library Design Conference in Melbourne in four categories – school libraries, public libraries, academic libraries and special libraries. The school library at St Joseph’s Nudgee College sits within the Hanly Learning Centre. The new build library, located in Boondall, Queensland, was completed by architect m3architecture in April 2015 with a budget of $10.2 million. In judging for the award, the jury noted that the architecture of the building is ‘striking, welcoming and inspiring’. The library is open from early morning into the evening for use by the 1500 students, from Year 5 to 12. Defining The Modern School Library.