3 text to speech tools and 5 ways your students can use them. Many times people are accused of talking to their computers. 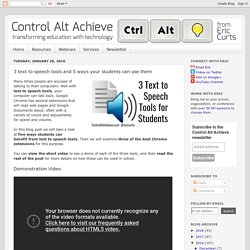 Well with text to speech tools, your computer can talk back. Google Chrome has several extensions that will read web pages and Google Documents aloud, often with a variety of voices and adjustments for speed and volume. In this blog post we will take a look at five ways students can benefit from text to speech tools. Then we will examine three of the best Chrome extensions for this purpose. You can view the short video to see a demo of each of the three tools, and then read the rest of the post for more details on how these can be used in school.Demonstration Video. Google-izing the 5E Lesson Model - TechNotes Blog - TCEA. Design 5E model lessons that blend what you know about Google Suites for Education tools. 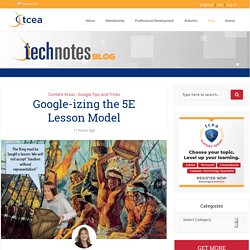 Come along as we explore the possibilities. Ready to blend Google Suites for Education tools into inquiry-based lessons? A wide variety of approaches exist, none more popular than the 5E Model. Google’s 12 Education Updates Include Classwork and a (Slight) Classroom Makeover. When Google’s education users return to schools this fall, their classrooms may look different in more ways than one. 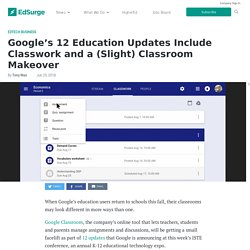 Google Classroom, the company’s online tool that lets teachers, students and parents manage assignments and discussions, will be getting a small facelift as part of 12 updates that Google is announcing at this week’s ISTE conference, an annual K-12 educational technology expo. First launched in 2014, Google Classroom is now used by more than 30 million students and teachers around the world, the company claims.

I like to say that the essential tech skill for students is “adaptability.” When given a new tech tool do they sit and wait for someone to show them what to do or can they figure it out independently? Technology changes move faster than training can keep up. Video Dubbing Learning Activities for Students. When I was a kid, we used to find creative ways to keep ourselves entertained. 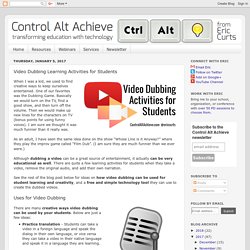 One of our favorites was the Dubbing Game. Basically we would turn on the TV, find a good show, and then turn off the volume. Then we would make up new lines for the characters on TV (bonus points for using funny voices). I am sure we thought it was much funnier than it really was. As an adult, I have seen the same idea done on the show “Whose Line is it Anyway?” Although dubbing a video can be a great source of entertainment, it actually can be very educational as well. Three Tips for New Google Sites Makers. Extensions vs Web Apps vs Add-ons. The Google ecosystem provides a wide range of powerful programs to help you do pretty much anything you need. 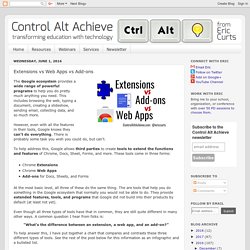 This includes browsing the web, typing a document, creating a slideshow, sending email, collecting data, and so much more. However, even with all the features in their tools, Google knows they can’t do everything. There is probably some task you wish you could do, but can’t. To help address this, Google allows third parties to create tools to extend the functions and features of Chrome, Docs, Sheet, Forms, and more. These tools come in three forms: Chrome ExtensionsChrome Web AppsAdd-ons for Docs, Sheets, and Forms At the most basic level, all three of these do the same thing. Even though all three types of tools have that in common, they are still quite different in many other ways.

"What’s the difference between an extension, a web app, and an add-on?” 20 Chrome Extensions, Web Apps, and Add-ons for Math. As awesome as Google tools are for students, teachers, and schools, sometimes they can lack a feature or tool you need for your specific subject area. 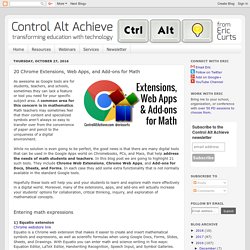 A common area for this concern is in mathematics. Math teachers may sometimes feel that their content and specialized symbols aren’t always so easy to transfer over from the convenience of paper and pencil to the uniqueness of a digital environment. While no solution is even going to be perfect, the good news is that there are many digital tools that can be used in the Google Apps world on Chromebooks, PCs, and Macs, that help address the needs of math students and teachers. In this blog post we are going to highlight 21 such tools. They include Chrome Web Extensions, Chrome Web Apps, and Add-ons for Docs, Sheets, and Forms. Google Movies: Fast, Fun, Easy Way to Capture & Celebrate Learning. Part of providing an effective learning opportunity includes capturing and celebrating the learning. 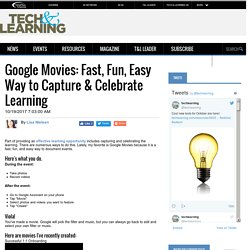 There are numerous ways to do this. Lately, my favorite is Google Movies because it is a fast, fun, and easy way to document events. Here's what you do. One year later: Duo rules, Allo drools. When Google announced their new messaging and video call applications, Allo and Duo, during Google I/O last year, I was ecstatic. 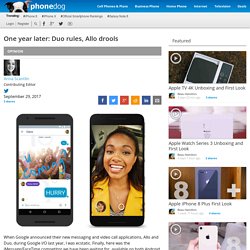 Finally, here was the iMessage/FaceTime competitor we have been waiting for, available on both Android and iOS. It might take some convincing to get people to try Allo out – and might be a difficult sell, considering I also tried to convince people to use Hangouts before, too. But assuming this was the all-in-one messaging solution I thought it was going to be, it would be well worth it. Except it kind of wasn’t. 10 Google Apps tips EVERY teacher should know. Google Apps has its own unique quirks that can make life more efficient. 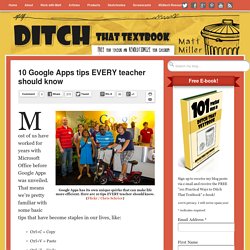 Here are 10 tips EVERY teacher should know. (Flickr / Chris Schrier) Most of us have worked for years with Microsoft Office before Google Apps was unveiled. That means we’re pretty familiar with some basic tips that have become staples in our lives, like: Teaching Digital Citizenship in 2017 – BlogWalker. Digital citizenship is often cited as the fastest changing subject in the K-12 curriculum.

Thinking back 10 years to 2007, when I first began rolling out a digital citizenship program for my district, we were using iSafe, a curriculum that focused on keeping students safe from others. “Stranger danger” was a big concern, with much media coverage – and a bit of hype. By 2008, we were concerned not only with keeping students safe from others, but also with keeping them safe from each other and from themselves. By now both the federal government and our state government had started issuing legal mandates, including the federal E-Rate/CIPA requirements.

Through a district task force (which had morphed from the Internet Safety Task Force to the Digital Citizenship Task Force), we made a commitment that all students would be firmly grounded in what it means to be active, contributing (digital) citizens in all the communities to which they belong, within and beyond the school day. Writing Tools for Chrome - TechNotes Blog - TCEA. This blog will showcase some powerful tools for all types of writing that your students (and you!) Can use with the Chrome browser. The Chrome browser is such a powerful piece of software, and it’s becoming more prevalent every day. Whether you’re using a Windows, Mac, or Chrome computer, this browser should be your go-to for Internet access. G Suite keyboard shortcuts – Mr. Hill's Musings. We all use the copy & paste shortcuts, probably on a daily basis. If only everything was that simple! Well, it is. 10 great obscure Google tricks for school, life. Google’s products are widespread, so knowing all of them are next to impossible.

Here are 10 you migh not know that can help your classroom or life. Google is such a behemoth. It’s next to impossible to count all of the apps it has produced, let alone all of the extra services and goodies that hide within its catacombs. How to Make the Most of Student Video Projects with G Suite. Pinterest Classroom Ideas for Making the Most of the New Video Options in Google Slides In this episode, Matt and I go more in-depth with the new video options in Google Slides, as well as share ideas for video projects in the classroom.

18 Updates to Google Tools That You Might Have Missed This Summer. The middle of August is almost here which means that many have returned for the start of the new school year. And those who haven't started will be starting soon. Alice Keeler Webcam Record. Cookies are Not Accepted - New York Times. But that also caused problems in Chicago and another district when Google went looking for teachers to try a new app — effectively bypassing district administrators. Control Alt Achieve: 20 Instant Google Searches your Students Need to Know. Google strives to make their search as useful as possible, bringing back the most appropriate results for the terms you entered.

YouTube. How to HyperDoc - Google Slides. 100 Google Apps Tutorial Videos. Often when I'm stuck on a technical problem all I need to get myself over the hurdle is just a quick tip. That's why when I started making ed tech tutorial videos I made a conscious effort to keep them short and sweet. My YouTube channel now has more than 400 tutorial videos including 100 Google Apps tutorial videos organized into a playlist for you. Control Alt Achieve: Google Drawings Chess and Checkers for Students. Earlier this week I shared a post about Battlesheets, my Google Sheets version of the classic tabletop game Battleship. Google: Girls Can Achieve Great Things Through Coding. Rose Broome, founder and chief executive officer of HandUp, grew up in California's Silicon Valley, playing in computer server rooms and making backup tapes. As an undergraduate at Santa Clara University, she studied computer science and business computing as an information systems student, but then switched disciplines.

Graduating with a degree in campaign management, Broome thought that it would enable her to do more community-focused work, such as public health messaging. 3 Ways Google Arts & Culture Can Enrich Your Lessons. Imagine your students learning about the massive prehistoric creatures that used to walk the earth and being able to look them in the eye. Or imagine your class studying van Gogh’s art and being able to look closely enough to study his brushstrokes. We’re not describing an episode of The Magic School Bus; we’re talking about the reality that is Google Arts & Culture. 11 Google Now tips you need to try today. 1. Set it up right.

7 Things You Didn’t Know You Could Do With a Chromecast. Tech Tip: Capture ideas with voice typing in Google Docs. Tech Tip: Digital storytelling with Google Map tools. The advanced Google searches every student should know. Google Calendar: Add Attachments. 15 Effective Ways to Use Google Docs in Class. Kaizena · Give Great Feedback. How to Expertly Organize Your Classroom With Google Sites. Welcome to Flubaroo. 17 Things You Didn't Know Google Chrome Could Do. The Secret Powers of Chrome's Address Bar. Google Cheat Sheets. 10 Sentences that Teachers using Google Apps never hear...#ASCD15...