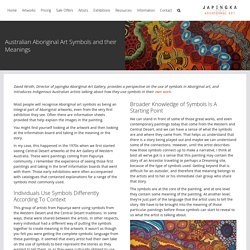 But all symbols used in regions have a long history, going right back to prehistoric times, and since that time they have been used consistently by the local people. Examples of symbols engraved or painted on rock art sites show a record of use of these marks for tens of thousands of years. The remarkable thing is that these same symbols are understood and are still being used by Aboriginal people today. Aboriginal people of the Central and Western Desert use a range of symbols that derive from their hunting and tracking background. Where people come together is usually marked as a circle or a set of concentric circles. Animals for the desert Aboriginal people are represented by the tracks they leave behind.

Symbols are a graphic way to communicate meaning for Aboriginal people, who did not have a history of writing. Aboriginal Art Symbols - Iconography. Aboriginal People do not have their own written language, and so they make use of many common symbols (often called iconography) in their artwork.

Although these vary from region to region, they are generally understood and form an important part of Australian Indigenous art. A few of the more common ones, and some variations are shown here. A painting may have several levels of story depending on whether the story is being told to children, initiates, or among elders or law people. The meaning of the symbols can change depending on the context of the story concerned. 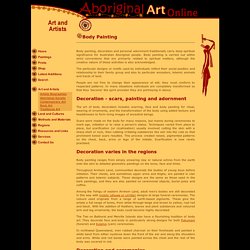 Body painting is carried out within strict conventions that are primarily related to spiritual matters, although the creative nature of these activities is also acknowledged. The particular designs or motifs used by individuals reflect their social position and relationship to their family group and also to particular ancestors, totemic animals and tracts of land. People are not free to change their appearance at will; they must conform to respected patterns. In many situations individuals are completely transformed so that they 'become' the spirit ancestor they are portraying in dance. 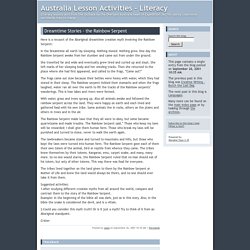 Nothing moved. Nothing grew. One day the Rainbow Serpent awoke from her slumber and came out from under the ground. Song for the Rainbow Serpent from Sacred Land Film Project on Vimeo. ABC Online Indigenous - Interactive Map. Aboriginal languages of Australia - Creative Spirits. When I speak language, it makes me feel [at] home. 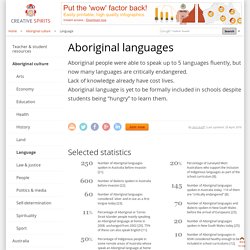 —Roger Hart, Aboriginal elder [1] I think that Australia holds one of the world's records for linguicide, for the killing of language. —Prof Ghil'ad Zuckermann, linguist, Adelaide University [2] Multilingual memory masters Aboriginal people are experts when it comes to language. In my community, it was common to speak 10 languages. Some Australian Indigenous languages you should know. How many Indigenous languages exist in Australia? 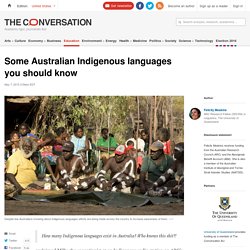 Who knows this shit?! Exclaimed Milly, the receptionist at an Indigenous radio station on ABC’s new program 8MMM, reading out a question on a cultural awareness training form. Stories from the report. Australia Walkabout Wildlife Park Aboriginal Experience. Australia states and territories. Australia Archives - kidcyber. The Official Full Version Of The Australian National Anthem With Lyrics. Australian History Timeline. Australia presentation. 7 Sydney. Spent time You spent time in Australia quite recently, so tell us about that. 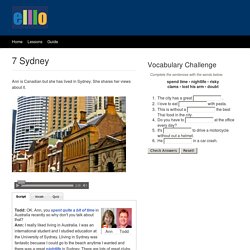 To 'spend time' in a place is to be there for a while. You can also spend time with people. Notice the following: You have spent a lot of time in the sun recently. Nightlife There was a great nightlife in Sydney. Nightlife refers to bars, clubs and restaurants that people go to at night to see friends and meet new people. It is small town that has no nightlife, so I moved. Risky It's risky to go diving without a diving license. Something that is 'risky' could have bad consequences. It is risky to walk alone at night. ENGLISH LANGUAGE LAB: PLAY AUDIOUm..I'm gonna laugh! 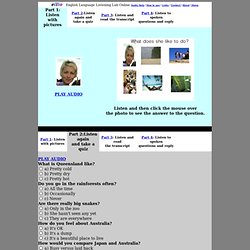 OK. Hello! Hello! Aussie English for the Beginner HTML version. Australia. Australian History Timeline. Top 10 Places to Visit in Australia. Golden Victoria. Colonial Melbourne. Eslteacher- Most important English speaking Countries. Things To Do In Australia. There are a lot of things to do in Australia from the outback to the shores you can always find something going on to suit you. 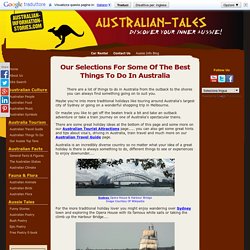 Maybe you're into more traditional holidays like touring around Australia's largest city of Sydney or going on a wonderful shopping trip in Melbourne. Or maybe you like to get off the beaten track a bit and take an outback adventure or take a train journey on one of Australia's spectacular trains. There are some great holiday ideas at the bottom of this page and some more on our Australian Tourist Attractions page..... you can also get some great hints and tips about visa's, driving in Australia, train travel and much more on our Australian Travel Guide page. Australia is an incredibly diverse country so no matter what your idea of a great holiday is there is always something to do, different things to see or experiences to enjoy downunder.... ELI 101 New Headway plus 3 Australian Climate. Welcome to the Australian folktales page! Dust Echoes: Ancient Stories, New Voices.

This Australian Life Australia Network. Anzac booklets and units to download. CE_webquest_Australia_niveau_A2_B1.pdf. Welcome to Australia. Ancient Australian History. There were eleven ships in the First Fleet. 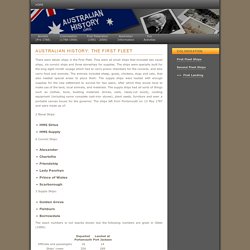 They were all small ships that included two naval ships, six convict ships and three storeships for supplies. The ships were specially built for the long eight month voyage which had to carry prison chambers for the convicts, and also carry food and animals. The animals included sheep, goats, chickens, dogs and cats, that also needed special areas to place them.

The supply ships were loaded with enough supplies for the new settlement to survive for two years, after which they would have to make use of the land, local animals, and materials. The supply ships had all sorts of things such as clothes, tools, building materials (bricks, nails, ready-cut wood), cooking equipment (including some complete cast-iron stoves), plant seeds, furniture and even a portable canvas house for the governor. First Fleet: 04/02/2014, Behind the News. Recently we celebrated Australia day on the 26th of January. But why do we mark it on that day in particular? To answer that question, Sarah will take you back in time to 1788, to meet some kids who came to Australia on the First Fleet. Kid 1: “My name is John Hudson and I'm nine years old. I've been an orphan ever since I can remember and I made a living sweeping chimneys.

It was horrible work, dangerous too. Kid 2: “For the theft of one linen shirt, value 10 shillings, five silk stockings, value 5 shillings, one pistol, value 5 shillings, and two aprons, value 2 shillings. Realia (forts.) - engelska - åk8. Ansvarig/Ansvariga: Maggie MorkosNär, under vilka veckor? Australia. Australia's ecosystem is an unusual one because of its remote location. As a result, there are many animal species that occur here and nowhere else in the world, such as the platypus, kangaroo, echidna, and koala. Australia has 516 national parks to protect its unique plants and animals.

One of Australia's most amazing sites rises like an enormous whale's back from a flat red-soil desert called the Red Center. This site is called Uluru, and it is a sacred natural formation at the heart of the country. Rising 1,100 feet (335 meters) tall, it is the largest rock in the world! Australia is home to many of the deadliest species of animals on the planet.

Meet a convict. Education - Indigenous Australia on ASO. Access VG1: Aboriginal Australians. Tracks 2013: The First Australians / Son of Mine. Tracks 2013: Australian National Holidays. Newflightextra.cappelendamm.no/c39508/sammendrag/vis.html?strukt_tid=39508. Australia - the land down under. Australian History. Lesson plans, resources, and ideas for countries in Australia and Oceana. In addition to the printables that can be used for any country study, I make additional sheets for specific countries ~ mapping activities and flag notebooking sheets {and sometimes more!}. We took two weeks to study the continent of Australia. Our first week we focused more on the geography of Australia {Great Barrier Reef, desert, oceans surrounding Australia} as well as the currency, the Australian flag, and learned some Australian slang words {grins}.

Australia is a product of a unique blend of established traditions and new influences. The country’s original inhabitants, the Aboriginal and Torres Strait Islander peoples, are the custodians of one of the world’s oldest continuing cultural traditions.