Calling time on racism in sport. Comment If you’re used to having the best seat in the stadium, why would you want to change? 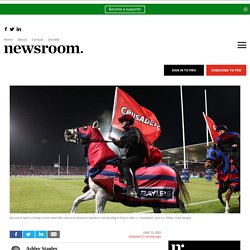 Ashley Stanley asks how we can rewrite the rule book to end white supremacy in New Zealand sport. Black lives don’t matter. That’s what #blacklivesmatter is simply counteracting. But there is nothing simple about racism, systemic oppression and their master white supremacy. Those three words are loaded with over 400 years of slavery - 400 years of an atrocious inhumane reality for black people. And they’re still shackled. History tells us that black lives don't matter to white people. If the statement makes you squirm and get defensive, stop.

If white people are truly honest about unpacking those uncomfortable feelings, there are usually two reasons that’s their initial reaction. They have black friends/colleagues/partners/children/neighbours so of course they can’t be. Wrong. So, what does that mean for Aotearoa New Zealand? It’s making racial remarks and saying sledging is part of the game. 1. 2. 3. The Bizarre and Racist History of the BMI - Your Fat Friend - Medium. Kaepernick stirs new controversy for Nike as 'racist trainer' pulled from sale. Nike's sales have only grown since it seized attention with its ad campaign featuring former NFL quarterback Colin Kaepernick. 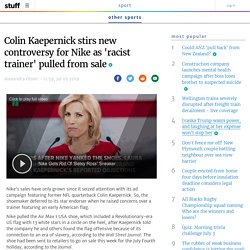 So, the shoemaker deferred to its star endorser when he raised concerns over a trainer featuring an early American flag. Nike pulled the Air Max 1 USA shoe, which included a Revolutionary-era US flag with 13 white stars in a circle on the heel, after Kaepernick told the company he and others found the flag offensive because of its connection to an era of slavery, according to the Wall Street Journal. The shoe had been sent to retailers to go on sale this week for the July Fourth holiday, according to the Journal. The decision caused an instant backlash among conservatives who accused Nike of denigrating US history, with Arizona Governor Doug Ducey tweeting that he is asking the state's Commerce Authority to withdraw financial incentives promised to Nike to build a plant in the state.

Athletics: IAAF claims Olympic champion Semenya is 'biologically male' The governing body of track argued in court that Olympic champion Caster Semenya is "biologically male" and that is the reason she should reduce her natural testosterone to be allowed to compete in female competitions, according to documents released publicly for the first time on Tuesday and which provide new insight into a bitter legal battle. 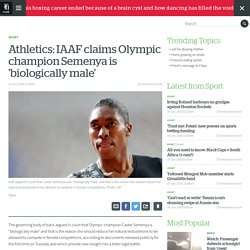 The documents released by sport's highest court show that Semenya responded by telling the judges that being described as biologically male "hurts more than I can put in words. " The 28-year-old South African runner said she was unable to express how insulted she felt at the IAAF "telling me that I am not a woman. " Patronising the Pacific : Rugby News May 2019 pg 56. The Serena Cartoon Debate: Calling out Racism Is Not ‘Censorship’ Re-branding the Crusaders. MAY 6, 2019 Updated 5 hours ago Alex Ashton Alex Ashton is the co-host of Newsroom's daily podcast, The Detail. 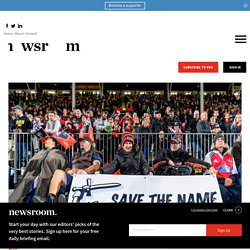 Show more Podcast: The Detail The Crusaders rugby franchise has found itself in a bit of a public relations dilemma. The team has built itself on a ‘crusading’ brand, with sword-wielding knights running into battle on horseback. In an historical sense, the Crusades were a series of holy wars fought by Christians, largely against Muslim countries. Geoff Troughton runs the religious studies programme at Victoria University. Newsroom sports journalist Steve Deane had written a divisive column on the issue. By Kyle Korver. Hen the police break your teammate’s leg, you’d think it would wake you up a little. 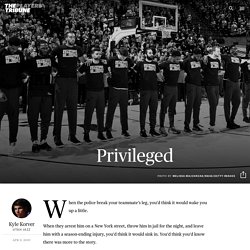 When they arrest him on a New York street, throw him in jail for the night, and leave him with a season-ending injury, you’d think it would sink in. You’d think you’d know there was more to the story. You’d think. But nope. I still remember my reaction when I first heard what happened to Thabo. Well, almost everyone. Which is why I want to share it today.

Before I tell the rest of this story, let me just say real quick — Thabo wasn’t some random teammate of mine, or some guy in the league who I knew a little bit. It didn’t take long for me to figure out that Thabo was one of the most interesting people I’d ever been around. Anyway — on the morning I found out that Thabo had been arrested, want to know what my first thought was? Yeah. I thought, Well, if I’d been in Thabo’s shoes, out at a club late at night, the police wouldn’t have arrested me. Crusaders name change: Maintaining the status quo 'no longer tenable' Manukau United and using football to fight racism. Özil's resignation sparks recriminations across German politics. Runner With Cerebral Palsy By Offering a Professional Contract. Turning unconscious racism to your advantage : South Korea: Shin Tae-yong made players swap shirts to try to confuse opposition - BBC Sport. 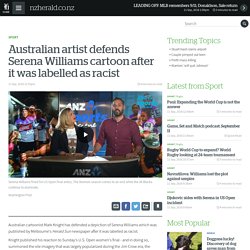 Knight published his reaction to Sunday's U.S. Open women's final - and in doing so, summoned the vile imagery that was largely popularized during the Jim Crow era, the Washington Post reports. In the new cartoon, which mocks the heated exchanges between runner-up Serena Williams and chair umpire Carlos Ramos, Knight depicts the 23-time Grand Slam champion as a child throwing a tantrum as the umpire says to eventual champion Naomi Osaka, "Can you just let her win? " In doing so, Knight draws facial features reflecting the dehumanizing Jim Crow caricatures so common in the 19th and 20th centuries. ‘You’re a racist!’ Radio talkback host explodes at rugby bigot.