What’s the Matter with White People?

How the El Paso Killer Echoed the Incendiary Words of Conservative Media Stars. Language like “invasion” and the “replacement” of Americans has increasingly become a regular part of Fox News broadcasts, Rush Limbaugh shows and other prominent conservative media. 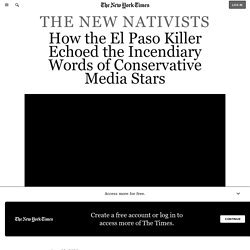 By Jeremy W. The Great God Trump and the White Working Class. History has been hacked. 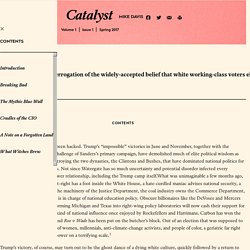 The Women Behind White Power. Few Americans know the name Cornelia Dabney Tucker, but the Jim Crow South would not have been the same without her. 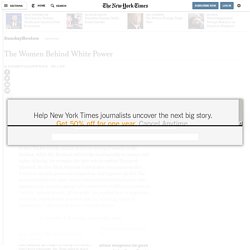 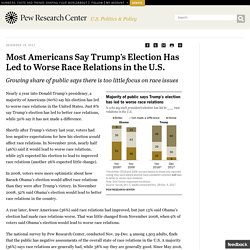 Bannon's best Jewish friend: Klein's rise to prominence in the Trump era. When Steve Bannon was President Donald Trump’s chief strategist, his first call to the head of a Jewish organization was reportedly to Morton Klein of the staunchly right-wing Zionist Organization of America. 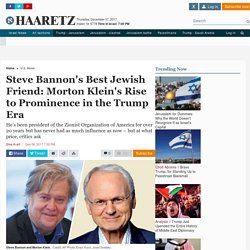 Bannon invited him to the White House and continued to call on him for advice on Israel before leaving his post in August, according to Klein. “I knew Bannon was a great friend of the Jewish people and Israel. He’d call for my views on Israel, and ask for my views on various issues like moving the U.S. Pity, O God, the Republican. Nobody will protect our Nation like Donald J. 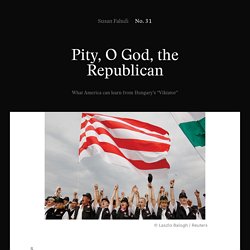 Trump. Our military will be greatly strengthened and our borders will be strong. Illegals out! — Donald J. Justice Dept. to Take On Affirmative Action in College Admissions. The project is another sign that the civil rights division is taking on a conservative tilt under President Trump and Attorney General Jeff Sessions. 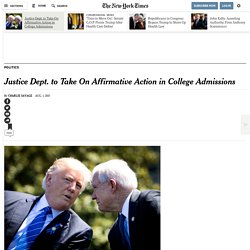 It follows other changes in Justice Department policy on voting rights, gay rights and police reforms. Roger Clegg, a former top official in the civil rights division during the Reagan administration and the first Bush administration who is now the president of the conservative Center for Equal Opportunity, called the project a “welcome” and “long overdue” development as the United States becomes increasingly multiracial. “The civil rights laws were deliberately written to protect everyone from discrimination, and it is frequently the case that not only are whites discriminated against now, but frequently Asian-Americans are as well,” he said.

Photo “This is deeply disturbing,” she said. It’s Already Happened Here. Unlike his products, Trump is all-American. / Teakwood It was 1855, and Abraham Lincoln was in a mood. 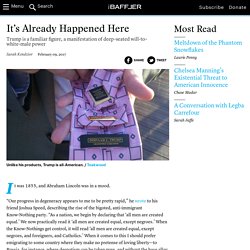 “Our progress in degeneracy appears to me to be pretty rapid,” he wrote to his friend Joshua Speed, describing the rise of the bigoted, anti-immigrant Know-Nothing party. Metropolis, the hometown of Superman, has a new hero: Donald Trump. In the center of Metropolis, Illinois, a town of 6,465 people bordering Kentucky, is a giant statue of Superman. 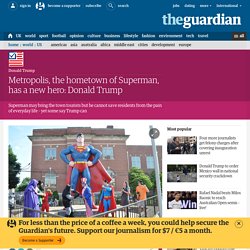 Below the statue of Superman is an inscription: “Truth – Justice – the American Way”. Once a thriving blue-collar industrial center, Metropolis has been decimated by factory closures, the 2008 financial collapse and concerns over air and water contamination from the Honeywell uranium plant. Its community has lost faith in truth and justice. 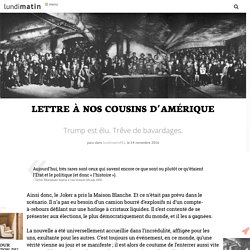 Et ce n’était pas prévu dans le scénario. On “Woke” White People Advertising their Shock that Racism just won a Presidency. Last night my black friend posted that he needs to Call in Black tomorrow; I “liked” his status and was immediately irritated when what appeared to be a white female replied, “Wish I could do the same.” Another friend of mine, white female, posted a long apology to black, Latinx, LGBT, and Muslim people and ended the lengthy post with “I don’t know what else to say to you.

I’m so so so sorry.” In the days leading up to the election, it was almost exclusively middle and upper-middle class white women posting about how they just need everyone in this election season to “let live, let love, let vote” and “not judge each other, ok?” Because “I’m over, like, the stereotypes!” Yet none of the irritated white women acknowledged anywhere in their exhaustion the rage and frustration that people of color and LGBT folk might be feeling because we’ve kinda wanted all those things — the life, the love, the vote — for hundreds of years and have been routinely denied them.

“I’m sorry, but as a white man, you don’t get to define what racism is.” Racial Remarks Reveal a Hidden Reason for Rust Belt Success. A supporter of Donald Trump holds a sign at a rally at Youngstown-Warren Regional Airport in Vienna, Ohio, on March 14, 2016. Gene J. Puskar/AP People across America reacted with shock Thursday to a video of racially charged comments by Donald Trump's campaign chairwoman for Ohio's Mahoning County, who denied that racism existed there before Barack Obama became president—remarks that quickly led her to resign.

"I do not believe that this is people saying, I couldn't possibly have a woman in this role," Mills told CNC News following Trump's big win. "This is so much bigger than that," she continued. "...and I will say it because I have literally nothing left to lose tonight.. this is literally white supremacy's last stand in America. " Mills explained what that looks like, referencing infamous incidents from the Trump campaign as well as the far-right's inexcusable agenda: Longing for a Golden Age That Never Was. Joan Walsh’s family, as she writes in her new book “What’s the Matter With White People? Why We Long for a Golden Age That Never Was,” participated in two of the great migrations of 20th-century American history.

Joan was born in Brooklyn, N.Y., but mostly grew up in suburbia (first on Long Island and later in Wisconsin). As that happened she watched many of her Irish-American family members morph from bedrock New Deal-JFK Democrats into Nixon-Reagan Republicans. Début de la fin du Blanc.