Music and math: The genius of Beethoven - Natalya St. Clair 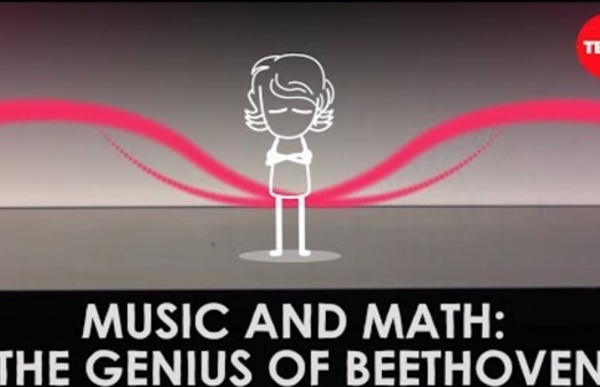 Body Painter Transforms Humans Into Breathtaking Portraits Of Animals There’s more to this beautiful heron than meets the eye. It’s actually a human body covered intricately in paint. The stunning work was created by artist Shannon Holt, a body painter from Florida who’s known for her ability to transform the human body into a canvas for beautiful art. inner product At the heart of digital signal processing is linear algebra, 'matrix algebra'. And at the heart of linear algebra is the inner product. Linear algebra is a huge area of research, most of of which I do not understand at all. Fortunately the inner product is a simple concept, and from there you can penetrate into deeper levels of the subject. On a previous page I illustrated how matrix multiplication is a matter of cutting the things into rows and columns and find the correlations of these vectors. Here is a cut 'n paste from that page to refresh.

Astrophysicist Writes Brutal Response To WSJ Article Claiming Science Has Proven God Exists Recently – Christmas Day, in fact – the Wall Street Journal published an article by a Christian apologist who boldly declared that science was “increasingly” making the case for God, year-after-year. Eric Metaxas is best known as a biographical writer, but he is also lauded (in conservative circles) for his work promoting the pro-life movement and making sweeping, outrageous conclusions about the existence of God based on whatever tenuous evidence seems handy at the time. If sweeping, outrageous conclusions be Metaxas bread-and-butter, than his Wall Street Journal article is perhaps his magnum opus. It’s a doozy.

Projects of Zack Booth Simpson: math Showing posts with label math. Show all posts Saturday, July 30, 2011 A Guy Created Hilarious Fake Animal Facts & Put Them Up At The Zoo If you've ever been to a zoo, you know that those little 'blurbs' on the animal signs can often go overlooked. Most people don't care what country the red-tailed hawk originated from or the typical shade of bamboo koalas prefers to snack on at night. Comedian Jeff Wysaski (aka Obvious Plant), decided to spice up those fun facts by making them, well, not facts at all. section-WILA Subsection LA Linear + Algebra The subject of linear algebra can be partially explained by the meaning of the two terms comprising the title. “Linear” is a term you will appreciate better at the end of this course, and indeed, attaining this appreciation could be taken as one of the primary goals of this course. However for now, you can understand it to mean anything that is “straight” or “flat.” For example in the -plane you might be accustomed to describing straight lines (is there any other kind?)

An American Tragedy The election of Donald Trump to the Presidency is nothing less than a tragedy for the American republic, a tragedy for the Constitution, and a triumph for the forces, at home and abroad, of nativism, authoritarianism, misogyny, and racism. Trump’s shocking victory, his ascension to the Presidency, is a sickening event in the history of the United States and liberal democracy. On January 20, 2017, we will bid farewell to the first African-American President—a man of integrity, dignity, and generous spirit—and witness the inauguration of a con who did little to spurn endorsement by forces of xenophobia and white supremacy. It is impossible to react to this moment with anything less than revulsion and profound anxiety. All along, Trump seemed like a twisted caricature of every rotten reflex of the radical right. In the coming days, commentators will attempt to normalize this event.

Matrixology, Season 8 S8E01: Overview, motivation, and the Row, Column, and Matrix Picture. Three ways of looking at Ax=b. S8E02: Gaussian Elimination the one True Way. Our matrix A connects with its inner matrices, U and R. S8E03: Enter the Elimination Matrix. Are Math Equations Beautiful? Euler's Identity Makes Mathematicians Swoon Drumroll, please. Here is Euler's identity: eiπ + 1 = 0. Did you leave you breathless? Have you been swept off your feet? Are you sobbing tears of joy over its alluringly pure beauty?

Stop And Smell The Cherry Blossoms During Hanami In Japan Each spring, the sakura bloom to display pastel pink hues throughout the entire country of Japan. Viewing these flowers is the tradition of hanami, and it's a pretty huge deal. The word itself means to just view flowers (hana means "flower" and mi is "to look"). During hanami season, which last for a few weeks in March and April, people hold flower appreciation picnics under the cherry blossoms.

Graphical Linear Algebra So far we have not discussed categories in any depth. The reason for this is that I wanted to give you a feel for working with diagrams, for which we do not really need any deeper theory. I hope that I managed to convince you that diagrammatic reasoning is very intuitive: stretching, tightening and sliding along wires are all quite easy to visualise and think about. String diagrams are a user friendly notation, and the operations on them are also quite intuitive, at least if you ever played with Lego. These intuitive aspects are extremely important. Ancient Babylonian Tablet Explained As A Trigonometric Table Almost a century ago, Edgar Banks – the inspiration for Indiana Jones – dug up a clay tablet in southern Iraq, but it took until now for its meaning to be understood. With this explanation has come insight into Babylonian mathematics, which operated on a different, and in some ways preferable, system than our own. In 1945, it was realized that the tablet, known as Plimpton 322 after it was sold to collector George Plimpton for $10, had mathematical significance, but the details remained a mystery. New research argues it represents part of a trigonometric table, and one more accurate than those that came afterwards. Plimpton 322's burial location in what was once the city of Larsa indicates it's 3,700 years old, dating from the time of Hammurabi, who established one the earliest surviving legal codes. “The huge mystery, until now, was its purpose – why the ancient scribes carried out the complex task of generating and sorting the numbers on the tablet,” Mansfield continued.