The Bath of Madame Mauriac. Rowan Hisayo Buchanan. The Story Collector, or, How Not to Write a Novel. On Friday evenings, Sergei Sergeevich rounded us up from campus in his pickup truck and drove us to the white, wooden house at the edge of a lake. 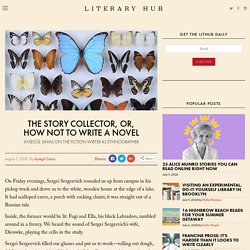 It had scalloped eaves, a porch with rocking chairs; it was straight out of a Russian tale. The Night Gertrude Stein Met Dashiell Hammett. Whatever else had changed during her years living as a Parisian, Gertrude Stein had kept up on America’s criminals—Dillinger, Hauptman, Capone—and especially its crime fiction. 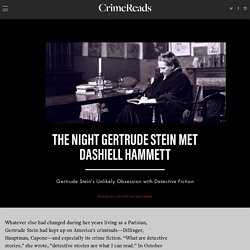 “What are detective stories,” she wrote, “detective stories are what I can read.” In October 1934 Stein came home for a triumphant six-month lecture tour of America. When she and her companion Alice Toklas arrived in New York harbor, she had been away in France for three decades, writing Modernist prose and mentoring painters and literary exiles in her Paris salon. (Picasso had famously painted her portrait.) Her latest work, The Autobiography of Alice B. Crossing the country, Stein hunted up detective novels in drug stores, places she otherwise found “dirty” and troubling by European standards. The only violence Stein’s chaperones could produce that night was the distant shooting death of Baby Face Nelson north of the city, which crackled teasingly over the police radio as they drove. The Art of the Late Bloomer. The 18th century was a golden era for finding stuff in England: Roman coins in the garden soil, plesiosaur bones in the Dorset cliffs, passions buried under the crust of social expectations. 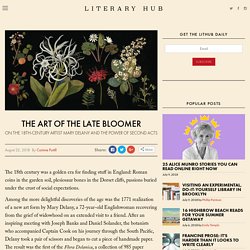 Among the more delightful discoveries of the age was the 1771 realization of a new art form by Mary Delany, a 72-year-old Englishwoman recovering from the grief of widowhood on an extended visit to a friend. After an inspiring meeting with Joseph Banks and Daniel Solander, the botanists who accompanied Captain Cook on his journey through the South Pacific, Delany took a pair of scissors and began to cut a piece of handmade paper. The result was the first of the Flora Delanica, a collection of 985 paper mosaics of plant life so startling in their accuracy that botanists still consult them more than 200 years later. 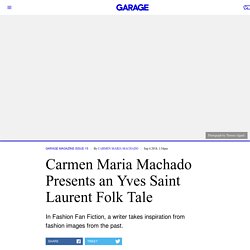 Yves Saint Laurent was passionate about working with models and muses who defied the white, “all-American” runway ideal of the 1980s. Writer Carmen Maria Machado takes inspiration from the real lives of four of Saint Laurent’s favorite models—Khadija Adams, Mounia Orosemane, Kirat Bhinder, and Daniela Ghione—and from a look book of the designer’s spring/summer 1985 couture collection, which resides at the Metropolitan Museum of Art’s Costume Institute Library, to reimagine the golden era of go-go ’80s style, when high fashion was a private and cosseted world, and modeling was often a springboard for a larger and more powerful life. Khadija: It is too cold to snow, too cold to think.

“The Wind Cave” When I was fifteen, my younger sister died. 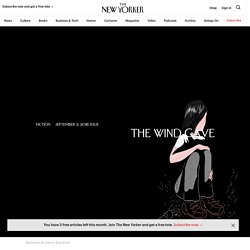 It happened very suddenly. She was twelve then, in her first year of junior high. She had been born with a congenital heart problem, but since her last surgeries, in the upper grades of elementary school, she hadn’t shown any more symptoms, and our family had felt reassured, holding on to the faint hope that her life would go on without incident. But, in May of that year, her heartbeat became more irregular.

It was especially bad when she lay down, and she suffered many sleepless nights. “Avoid strenuous exercise and follow a regular routine, and things should settle down soon,” her doctor said. But her arrhythmia didn’t settle down. My parents told me to watch over her, since her body was so delicate. She was on her way home from school one day when she collapsed. A Beautiful, Strange New Book Shows Why Horse Girls Aren’t Easy. The School by Donald Barthelme. The Graveyard Game by Kristen N. Arnett. All the neighborhood kids play the game, but none of them are as good at it as Gail and Sasha. 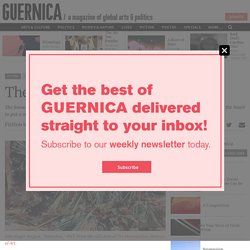 Ginny’s daughters stand over the other children with their fists dug into their hips and their legs spread wide. They survey the backyard with the serious expressions of seasoned military drill sergeants. It’s a game they play religiously. Every day after school, the same thing. Gail explained the rules to Ginny over dinner one night when Ginny got tired of guessing why they both had dirt in their hair. You play dead, you stay dead. Eight kids sprawl in the weeds with their arms crossed over their chests. Dead children lie between anthills that cropped up overnight between the patio and the stunted orange tree. She knows she should say something. Good, Ginny thinks. “You have to really hold it,” Gail says when a girl argues over an out. “Like this.” It was originally called Living Dead, but her girls renamed it The Graveyard Game.

Not in my own house, she thinks. “What am I doing?”