Stonehenge: Did the stone circle originally stand in Wales? The East India Company: How a trading corporation became an imperial ruler - HistoryExtra. In 1600, a group of London merchants led by Sir Thomas Smythe petitioned Queen Elizabeth I to grant them a royal charter to trade with the countries of the eastern hemisphere. 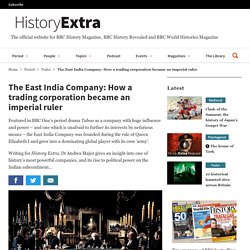 And so, the ‘Honourable Company of Merchants of London Trading with the East Indies’ – or East India Company, as it came to be known – was founded. Few could have predicted the seismic shifts in the dynamics of global trade that would follow, nor that 258 years later, the company would pass control of a subcontinent to the British crown. The company has recently been featured in BBC One’s period drama Taboo – central character James Delaney, played by Tom Hardy, comes into conflict with the EIC, which is characterised as a mighty and villainous organisation. In reality, how did this company gain and consolidate its power and profit? Tom Hardy as anti-hero James Delaney in Taboo. With Emperor Jehangir’s permission, they began to build small bases, or factories, on India’s eastern and western coasts. Stonehenge: DNA reveals origin of builders.

The ancestors of the people who built Stonehenge travelled west across the Mediterranean before reaching Britain, a study has shown. 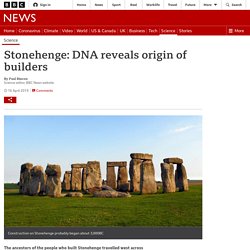 Researchers compared DNA extracted from Neolithic human remains found across Britain with that of people alive at the same time in Europe. The Neolithic inhabitants were descended from populations originating in Anatolia (modern Turkey) that moved to Iberia before heading north. They reached Britain in about 4,000BC. Details have been published in the journal Nature Ecology & Evolution. The migration to Britain was just one part of a general, massive expansion of people out of Anatolia in 6,000BC that introduced farming to Europe.

Before that, Europe was populated by small, travelling groups which hunted animals and gathered wild plants and shellfish. One group of early farmers followed the river Danube up into Central Europe, but another group travelled west across the Mediterranean. Image copyright Royal Pavilion & Museum, Brighton. William the Conqueror. Conqueror of England, first Norman king of England King of England William I[a] (c. 1028[1] – 9 September 1087), usually known as William the Conqueror and sometimes William the Bastard,[2][b] was the first Norman King of England, reigning from 1066 until his death in 1087. 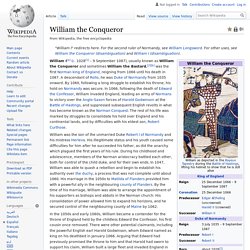 He was a descendant of Rollo and was Duke of Normandy from 1035 onward. His hold was secure on Normandy by 1060, following a long struggle to establish his throne, and he launched the Norman conquest of England six years later. 10 surprising facts about William the Conqueror and the Norman conquest. No one at the time called William ‘the Conqueror’ 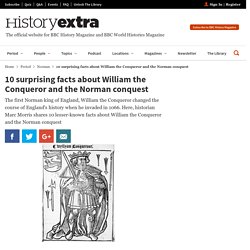 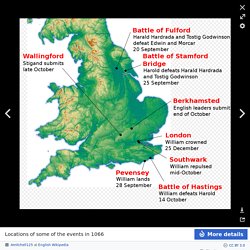 A descendant of Rollo, he was Duke of Normandy from 1035 onward. After a long struggle to establish his power, by 1060 his hold on Normandy was secure, and he launched the Norman conquest of England six years later. William the Conqueror. Tostig Godwinson. Tostig Godwinson (c. 1026 – 25 September 1066) was an Anglo-Saxon Earl of Northumbria and brother of King Harold Godwinson.[1] After being exiled by his brother, Tostig supported the Norwegian king Harald Hardrada's invasion of England, and was killed at the Battle of Stamford Bridge. 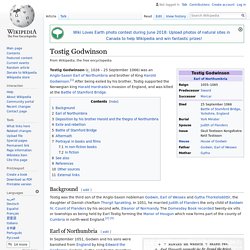 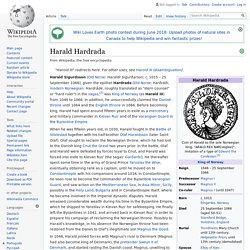 In addition, he unsuccessfully claimed the Danish throne until 1064 and the English throne in 1066. Before becoming king, Harald had spent around fifteen years in exile as a mercenary and military commander in Kievan Rus' and of the Varangian Guard in the Byzantine Empire. When he was fifteen years old, in 1030, Harald fought in the Battle of Stiklestad together with his half-brother Olaf Haraldsson (later Saint Olaf). Norse activity in the British Isles. Norse activity in the British Isles occurred during the Early Medieval period when members of the Norse populations of Scandinavia travelled to Britain and Ireland to settle, trade or raid. 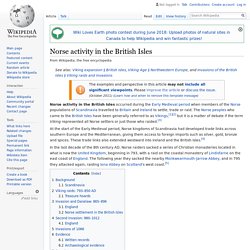 The Norse peoples who came to the British Isles have been generally referred to as Vikings,[1][2] but it is a matter of debate if the term Viking represented all Norse settlers or just those who raided.[3] At the start of the Early Medieval period, Norse kingdoms of Scandinavia had developed trade links across southern Europe and the Mediterranean, giving them access to foreign imports such as silver, gold, bronze and spices. Viking expansion. Map showing area of Scandinavian settlement in the eighth (dark red), ninth (red), tenth (orange) centuries. 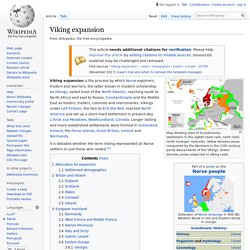 Yellow denotes areas conquered by the Normans in the 11th century, partly descendants of the Vikings. Green denotes areas subjected to Viking raids. It is debated whether the term Viking represented all Norse settlers or just those who raided.[1] Motivation for expansion[edit] Another idea is that the Viking population had exceeded the agricultural potential of their homeland.

Alternatively, some scholars propose that the Viking expansion was driven by a youth bulge effect: since the eldest son of a family customarily inherited the family's entire estate, younger sons had to seek their fortune by emigrating or engaging in raids. However, no rise in population, youth bulge, or decline in agricultural production during this period has been definitively demonstrated. Settlement demographics[edit] However, not all Viking settlements were primarily male. Norsemen. Map showing area of Norse settlements during the 8th to 11th centuries (which includes the Viking Age), including Norman conquests, some extending after this period (yellow). 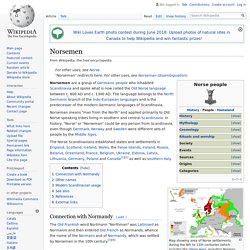 Trade and raid routes, often inseparable, are marked. Norsemen are a group of Germanic people who inhabited Scandinavia and spoke what is now called the Old Norse language between c. 800 AD and c. 1300 AD. The language belongs to the North Germanic branch of the Indo-European languages and is the predecessor of the modern Germanic languages of Scandinavia. Norseman means "man from the North" and applied primarily to Old Norse-speaking tribes living in southern and central Scandinavia. In history, "Norse" or "Norseman" could be any person from Scandinavia, even though Denmark, Norway and Sweden were different sets of people by the Middle Ages. Connection with Normandy[edit] Other names[edit]

Travel - The tiny island the British traded for Manhattan. We sailed out of the Arafura Sea, through the Timor Sea and into the Savu Sea. Soon we'd be in the Flores Sea and then the Banda Sea – home of the Banda, or Spice Islands, a cluster of 11 lush islands in eastern Indonesia. In the early days of sail exploration, these seas were known by Arabic traders as the Seven Seas, those enchanting waters on the other side of the world where spice was in the wind. To sail them meant you had sailed as far from staid, grey Europe as you could. According to the old sea charts, you'd reached the mystical ‘land of dragons’. We sailed to a place where history meets legend For the record, there are more than seven seas; it’s more like 100. The life and reign of English kings and queens visualised. Primogeniture is a pain. You can spend all your life waiting to be king or queen and then just have a few years on the throne - or you could be ruling for basically all of your life, which is probably a lot of responsibility.

East India Company - The world’s most powerful corporation. It was the most powerful multinational corporation the world had ever seen. Founded in 1600, the English East India Company’s power stretched across the globe from Cape Horn to China. The company was established for trading, with a royal charter by Queen Elizabeth I granting it a monopoly over business with Asia. In Shakespeare's Day, Hunger Tore Through England. His Plays Tell The Tale. An illustration depicts a scene from Shakespeare's Coriolanus, a play that opens with citizens armed with "staves, clubs, and other weapons" in protest against the city fathers they accuse of hoarding grain.