The Capitalocene. (Bio)plurality. Book review: New Dark Age: Technology and the End of the Future, by James Bridle / ArtReview. That no one any longer fully comprehends the economic, political and climatic systems upon which civilisation depends might seem self-evident. 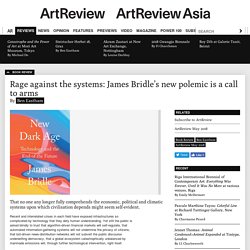 Recent and interrelated crises in each field have exposed infrastructures so complicated by technology that they defy human understanding. Yet still the public is asked blindly to trust that algorithm-driven financial markets will self-regulate, that automated information-gathering systems will not undermine the privacy of citizens, that bot-driven news-distribution networks will not subvert the public discourse underwriting democracy, that a global ecosystem catastrophically unbalanced by manmade emissions will, through further technological intervention, right itself. The Secrets of the Wood Wide Web. Epping Forest is a heavily regulated place. 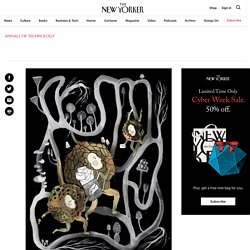 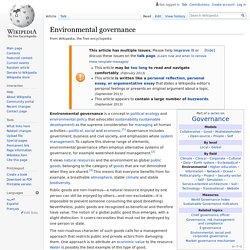 To capture this diverse range of elements, environmental governance often employs alternative systems of governance, for example watershed-based management.[2] It views natural resources and the environment as global public goods, belonging to the category of goods that are not diminished when they are shared.[3] This means that everyone benefits from for example, a breathable atmosphere, stable climate and stable biodiversity. Public goods are non-rivalrous—a natural resource enjoyed by one person can still be enjoyed by others—and non-excludable—it is impossible to prevent someone consuming the good (breathing). ICLEI. ICLEI – Local Governments for Sustainability, founded in 1990 as the International Council for Local Environmental Initiatives, is a global network of cities, towns and regions committed to building a sustainable future. 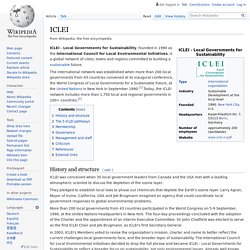 The international network was established when more than 200 local governments from 43 countries convened at its inaugural conference, the World Congress of Local Governments for a Sustainable Future, at the United Nations in New York in September 1990.[1] Today, the ICLEI network includes more than 1,750 local and regional governments in 100+ countries.[2] History and structure[edit] ICLEI was conceived when 35 local government leaders from Canada and the USA met with a leading atmospheric scientist to discuss the depletion of the ozone layer. Global Environment Facility. The Global Environment Facility (GEF) was established on the eve of the 1992 Rio Earth Summit to help tackle our planet’s most pressing environmental problems. 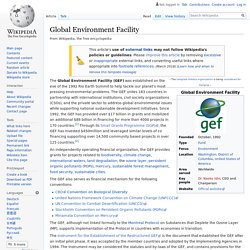 The GEF unites 183 countries in partnership with international institutions, civil society organizations (CSOs), and the private sector to address global environmental issues while supporting national sustainable development initiatives. Tom Griffiths on Histories for the Anthropocene by Institute for Advanced Studies in the Humanities. United Nations Environment Programme. Programme of the United Nations We ask you, humbly, to help. 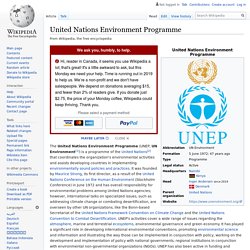 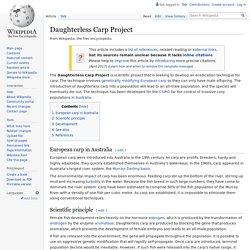 The technique involves genetically modifying European carp so they can only have male offspring. The introduction of daughterless carp into a population will lead to an all-male population, and the species will eventually die out. The technique has been developed for the CSIRO for the control of invasive carp populations in Australia. European carp in Australia[edit] European carp were introduced into Australia in the 19th century. The environmental impact of carp has been enormous. Scientific principle[edit] Monsanto. Monsanto was one of four groups to introduce genes into plants (1983),[2] and was among the first to conduct field trials of genetically modified crops, (1987). 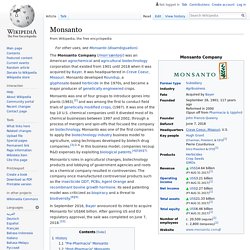 It was one of the top 10 U.S. chemical companies until it divested most of its chemical businesses between 1997 and 2002, through a process of mergers and spin-offs that focused the company on biotechnology. Monsanto was one of the first companies to apply the biotechnology industry business model to agriculture, using techniques developed by biotech drug companies.[3]:2–6 In this business model, companies recoup R&D expenses by exploiting biological patents.[4][5][6][7] 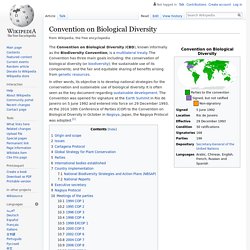 The Convention has three main goals including: the conservation of biological diversity (or biodiversity); the sustainable use of its components; and the fair and equitable sharing of benefits arising from genetic resources. In other words, its objective is to develop national strategies for the conservation and sustainable use of biological diversity. It is often seen as the key document regarding sustainable development. The Convention was opened for signature at the Earth Summit in Rio de Janeiro on 5 June 1992 and entered into force on 29 December 1993. At the 2010 10th Conference of Parties (COP) to the Convention on Biological Diversity in October in Nagoya, Japan, the Nagoya Protocol was adopted.[1] Origin and scope[edit] The convention reminds decision-makers that natural resources are not infinite and sets out a philosophy of sustainable use. Issues[edit] Protist. Unicellular organism of a diverse group of eukaryotic microorganisms In cladistic systems (classifications based on common ancestry), there are no equivalents to the taxa Protista or Protoctista, both terms referring to a paraphyletic group that spans the entire eukaryotic tree of life. 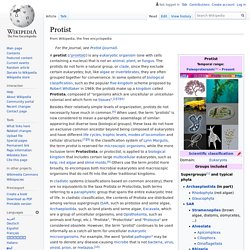 In cladistic classification, the contents of Protista are distributed among various supergroups (SAR, such as protozoa and some algae, Archaeplastida, such as land plants and some algae, Excavata, which are a group of unicellular organisms, and Opisthokonta, such as animals and fungi, etc.). "Protista", ''Protoctista'' and "Protozoa" are considered obsolete. Diatom. General biology[edit] A diatom. Numbered graduations are 10 micrometres apart There are more than 200 genera of living diatoms, and it is estimated that there are approximately 100,000 extant species.[2][3][4][5] Diatoms are a widespread group and can be found in the oceans, in freshwater, in soils and on damp surfaces.

Most live pelagically in open water, although some live as surface films at the water-sediment interface (benthic), or even under damp atmospheric conditions. They are especially important in oceans, where they are estimated to contribute up to 45% of the total oceanic primary production.[6] Spatial distribution of marine phytoplankton species is restricted both horizontally and vertically.[7][8] Usually microscopic, though some species of diatoms can reach up to 2 millimetres in length. Multi-agent system. Despite considerable overlap, a multi-agent system is not always the same as an agent-based model (ABM). The goal of an ABM is to search for explanatory insight into the collective behavior of agents (which don't necessarily need to be "intelligent") obeying simple rules, typically in natural systems, rather than in solving specific practical or engineering problems.

As such, they are useful approaches for optimization problems.[2] Several books and survey papers have been published on the subject.[2][4][5] Properties[edit] These are properties that characterize most metaheuristics: Classification[edit] Swarm intelligence. Swarm intelligence (SI) is the collective behavior of decentralized, self-organized systems, natural or artificial.

World Business Council for Sustainable Development. The World Business Council for Sustainable Development (WBCSD) is a CEO-led organization of over 200 international companies[3]. The Council is also connected to 60 national and regional business councils and partner organizations[4]. Polytely. Polytely (from Greek roots poly- and -tel- meaning "many goals") comprises complex problem-solving situations characterized by the presence of multiple simultaneous goals.[1] These goals may be contradictory or otherwise conflict with one another, requiring prioritisation of desired outcomes.[1] Intergovernmental Panel on Climate Change. The Intergovernmental Panel on Climate Change (IPCC) is an intergovernmental body of the United Nations,[1][2] dedicated to providing the world with an objective, scientific view of climate change and its political and economic impacts.[3] It was established in 1988 by the World Meteorological Organization (WMO) and the United Nations Environment Programme (UNEP), and later endorsed by the United Nations General Assembly.