69 Awesome Brain Hacks That Give You Mind-Blowing Powers. #49. 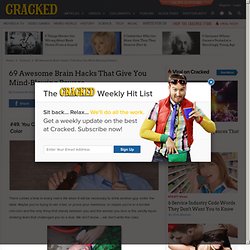 You Can Tell How Much Someone Drinks From Their Eye Color There comes a time in every man's life when it will be necessary to drink another guy under the table. Maybe you're trying to win a bet, or prove your manliness, or maybe you're in a terrible rom-com and the only thing that stands between you and the woman you love is the varsity liquor drinking team that challenged you to a duel. We don't know ... we don't write the rules. We merely follow them to their inevitable, disastrous conclusion. So naturally you'll pick out some blond-haired, blue-eyed pretty boy who looks like two Bud Lights would have him over a toilet. How? Picking the blue-eyed guy was a bad move.

"I can't even get through my breakfast changing without a fifth of SoCo. " A study of thousands of white men (all of them prisoners) found that for some reason, those with light eye colors like blue, green, gray or hazel, can handle more alcohol than men with dark eyes. "No, no. 50 Life Hacks to Simplify your World. Life hacks are little ways to make our lives easier. 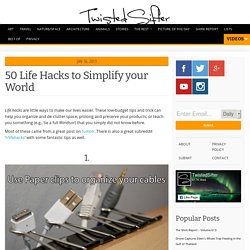 These low-budget tips and trick can help you organize and de-clutter space; prolong and preserve your products; or teach you something (e.g., tie a full Windsor) that you simply did not know before. Most of these came from a great post on tumblr. There is also a great subreddit ‘r/lifehacks‘ with some fantastic tips as well. Breaking the Brain Clock Predisposes Nerve Cells to Neurodegeneration. PHILADELPHIA — As we age, our body rhythms lose time before they finally stop. 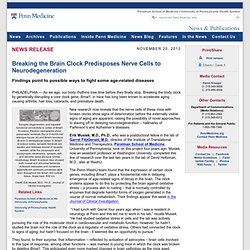 Breaking the body clock by genetically disrupting a core clock gene, Bmal1, in mice has long been known to accelerate aging , causing arthritis, hair loss, cataracts, and premature death. New research now reveals that the nerve cells of these mice with broken clocks show signs of deterioration before the externally visible signs of aging are apparent, raising the possibility of novel approaches to staving off or delaying neurodegeneration – hallmarks of Parkinson’s and Alzheimer’s diseases. Erik Musiek, M.D., Ph.D., who was a postdoctoral fellow in the lab of Garret FitzGerald, M.D., director of the Institute of Translational Medicine and Therapeutics, Perelman School of Medicine, University of Pennsylvania, took on this project four years ago. Musiek, now an assistant professor at Washington University, completed this line of research over the last two years in the lab of David Holtzman, M.D., also at WashU. 5 Ways To Hack Your Brain Into Awesomeness.

There are probably secrets the brain simply doesn't want us to know. But by no means should that stop us from tinkering around in there, using somewhat questionable and possibly dangerous techniques to make our brains do what we want. We can't vouch for any of these, either their effectiveness or safety. All we can say is that they sound awesome, since apparently you can make your brain... #5. So you just picked up the night shift at your local McDonald's, you have class every morning at 8am and you have no idea how you're going to make it through the day without looking like a guy straight out of Dawn of the Dead, minus the blood... hopefully. The Time Hack. The Time Hack is an experiment aimed at exploring whether our perception of time is influenced by our actions. 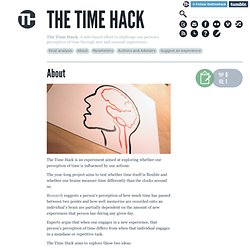 The year-long project aims to test whether time itself is flexible and whether our brains measure time differently than the clocks around us. Research suggests a person’s perception of how much time has passed between two points and how well memories are recorded onto an individual’s brain are partially dependent on the amount of new experiences that person has during any given day. Experts argue that when one engages in a new experience, that person’s perception of time differs from when that individual engages in a mundane or repetitive task. The Time Hack aims to explore these two ideas. Each day, I engage in a new experience to understand how my perception of time speeds and slows in relation to each event. For more information on the logistics of the project, take a look at the parameters section of the site. 99 Life Hacks to make your life easier! - Imeimei. Brain Hacks.

...For answer Holmes clapped the hat upon his head. 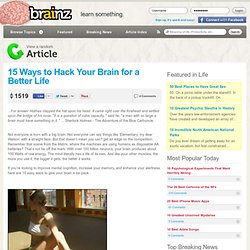 It came right over the forehead and settled upon the bridge of his nose. "It is a question of cubic capacity, " said he; "a man with so large a brain must have something in it. " ... Sherlock Holmes - The Adventure of the Blue Carbuncle. Not everyone is born with a big brain. If you’re looking to improve mental cognition, increase your memory, and enhance your alertness, here are 15 easy ways to give your brain a six-pack.