So the Flynn thing is actually great for the right. - Page 2. If your defenses are:1. 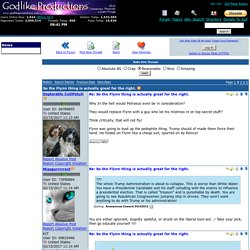 Somebody else did something bad too! 2. I was investigated and all they came up with is some bad stuff I did (not other stuff I didn't do.)3. It's not me you should be after, it's the person who ratted me out, cause that is not cool... And your crime happens to be some shade of .... treason...cavorting with our enemies. This is not good for you. I think some of you all want to quickly move on from the long memory of the Russians as our enemies on the world stage, and ignore or relativize their recent actions.

But you are forgetting that most of the people in power just don't see it that way. Trump needed to go super slow on the whole Russia is our friend thing. It may be that his actual connections aren't so bad, and it could even trigger a better debate about our relationship with Russia. Will NATO Attack Russia? Why do the British hate the Russians? A brief history of 500 years of anti-Russian propaganda. British political magazine, 19th century: 'Running amuck' - the perennial 'Russian savage and threat to global order and peace'. 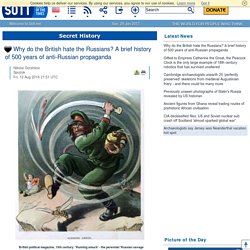 Why do the Brits hate Russia so? The latest spate of allegations by western media and politicians about Russian propaganda is nothing new. The UK Cabinet files from 1980s just released by National Archives in London reveal the British establishment's obsession with a propaganda war against Moscow. Ministers were worried over "the confused state of British public opinion (America seen as a great a threat to peace as Russia)" and "a strong strain of anti-Reagan and anti-American sentiment". 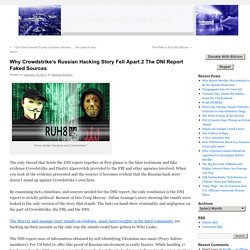 Forbes Welcome. Trump and the Deep State. Dear Reader, Some of you supported Donald Trump. 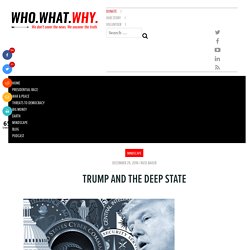 Others are paralyzed with concern over what his presidency will bring. Whatever your sentiment about the election and the future, almost all of you come to WhoWhatWhy for thoughtful, post-partisan inquiry: including, notably, deep dives into the “Deep State” — those institutions, networks, organizations, companies, and individuals that wield power on a long-term, though constantly shifting, basis, shaping America’s course in ways often missed by most of the media. We’re talking about financial interests. Trump vs US Intelligence. If it had not already been one of the most extraordinary and dramatic American Presidential elections in modern political history, the 2016 Trump v Clinton contest continues to become even more surreal, even though the vote was held over two months ago. 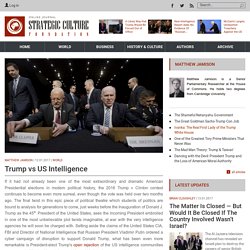 The final twist in this epic piece of political theatre which students of politics are bound to analysis for generations to come, just weeks before the Inauguration of Donald J. Trump as the 45th President of the United States, sees the incoming President embroiled in one of the most unbelievable plot twists imaginable, at war with the very intelligence agencies he will soon be charged with. Donald Trump has broken with many political and diplomatic precedents during his successful run for both the GOP Presidential nomination and then the Presidency itself. In many ways he has broken nearly every political rule and taboo there is. Where more conventional politicians fear to tread, President-elect Trump has shown no such inhibitions.

The Disgusting Embrace of Witch-Hunting McCarthyism by 'Liberals’ So-called «liberals» and «progressives», who once derided those on the political right who accused their ideological forbearers of kowtowing to the «Reds» and «Soviets» during the era of Senator Joseph McCarthy, have dusted off McCarthy’s playbook and are using the very same tactics against Donald Trump and his supporters. 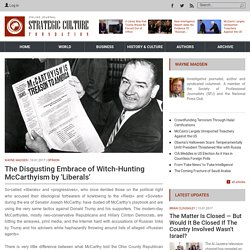 The modern-day McCarthyites, mostly neo-conservative Republicans and Hillary Clinton Democrats, are hitting the airwaves, print media, and the Internet hard with accusations of Russian links by Trump and his advisers while haphazardly throwing around lists of alleged «Russian agents». There is very little difference between what McCarthy told the Ohio County Republican Women’s Club in Wheeling, West Virginia in 1950: The Utter Stupidity of the New Cold War. Gary Leupp is Professor of History at Tufts University, and holds a secondary appointment in the Department of Religion It seems so strange, twenty-seven years after the fall of the Berlin Wall, to be living through a new Cold War with (as it happens, capitalist) Russia. 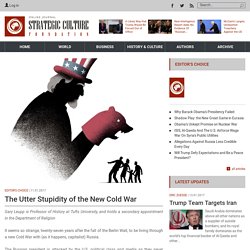 The Russian president is attacked by the U.S. political class and media as they never attacked Soviet leaders; he is personally vilified as a corrupt, venal dictator, who arrests or assassinates political opponents and dissident journalists, and is hell-bent on the restoration of the USSR. (The latter claim rests largely on Vladimir Putin’s comment that the dissolution of the Soviet Union was a “catastrophe” and “tragedy” — which in many respects it was. The press chooses to ignore his comment that “Anyone who does not miss the Soviet Union has no heart, while anyone who wants to restore it has no brain.” Washington Post Published Fake News Story About a Vermont Utility Getting Hacked by Russians.

The propaganda coming out of the Washington Post isn't even creative or convincing. 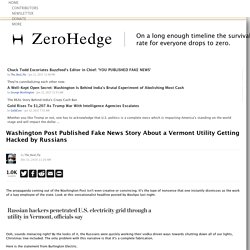 It's the type of nonsense that one instantly dismisses as the work of a lazy employee of the state. Look at this sensationalist headline posted by Washpo last night. Ooh, sounds menacing right? Rense 010417 hr2. Robert Steele: Donald Trump’s Bunker Hill Ronald Reagan Air Traffic Control Moment – Confronting CIA & The Deep State on Russians Hacking the Election (They Did Not) UPDATE 11 « Public Intelligence Blog. Robert David STEELE Vivas I invite readers to use the share buttons to send this to all possible pro-Trump twitter and facebook addresses (the ones that have not been illegally censored). 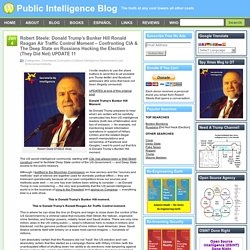 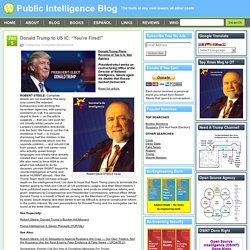 Robert David STEELE Vivas I invite readers to tweet this post to @realDonaldTrump and @seanspicer using the tweet share button at the bottom of this post. Snowden: Truth Is Coming & It Cannot Be Stopped · The Mind Unleashed. Soon after Edward Snowden went public with his information that exposed the NSA’s secret spying program, Snowden spoke some words that still ring with curiosity in the ears of many: “All I can say right now is the US Government is not going to be able to cover this up by jailing or murdering me.

Truth is coming, and it cannot be stopped.” Truth is coming, and it cannot be stopped. While those are some exciting words for most free thinkers, they are not so exciting for a certain few in Brussels, Washington D.C., London, New York, Vatican City, Frankfurt and other areas. If we look closer at his words and the timing of them, which was after, and not before he went public with his information, it appears that something is still in play…there is more truth left to be revealed…there are people still working to reveal even more truth.

The Trump “Intelligence” Briefing Has No Proof Russians Hacked (or Leaked) Anything: Assessing Russian Activities and Intentions in Recent US Elections UPDATE 7 « Public Intelligence Blog. Click on Image to Enlarge Best line = ZERO proof: “Judgments are not intended to imply that we have proof that shows something to be a fact. Assessments are based on collected information, which is often incomplete or fragmentary, as well as logic, argumentation, and precedents.” We do not make this stuff up. The Deep State Goes to War With President-Elect, Using Unverified Claims, as Democrats Cheer. In January 1961, Dwight Eisenhower delivered his farewell address after serving two terms as U.S. president; the five-star general chose to warn Americans of this specific threat to democracy: “In the councils of government, we must guard against the acquisition of unwarranted influence, whether sought or unsought, by the military-industrial complex.

The potential for the disastrous rise of misplaced power exists and will persist.” That warning was issued prior to the decadelong escalation of the Vietnam War, three more decades of Cold War mania, and the post-9/11 era, all of which radically expanded that unelected faction’s power even further. How 4Chan McFooled John McCain, Buzzfeed, and the CIA Into Believing Trump's Golden Showers. Ok, there is a lot to go through with this story, which is going to end up being one of the biggest embarrassments for Buzzfeed, the CIA, and old man McCain ever. First let's go over what happened, in reference to the pesudo intelligence report aka 'dossier' published by the high level retards over at Buzzfeed.

I know this appears to be unbelievable, but it's all verifiable. The neocon shill of a reporter from Buzzfeed, Rick Wilson, was catfished by some autist from the Hitler loving 4chan message boards and made to believe Trump enjoyed getting urinated on and all sorts of outlandish stuff. Truly, this is incredible. Let me post some screen shots. That right there is the head of Buzzfeed explaining why he published a dodgy report of utter nonsense that was, apparently, fished around to other news agencies and summarily rejected -- because it's retard level was too high even for The NY Times. Wikileaks calls bullshit on the report. Former CIA Spy Has A Surprising Message For Trump · The Mind Unleashed. “Dear Mr. Former CIA Spy Has A Christmas Message For Trump. Submitted by Robert Steele via TheMindUnleashed.com, "Dear Mr.

Trump, I am among the tens of millions who voted for you, and also among the twenty thousand or so that spent fifteen months obsessively devoted to getting you elected. I went to bed in tears on election night, only to be woken at midnight by my wife to watch the miracle unfold. Perhaps someone will read this and in a second miracle, you will hear my voice. The Utter Stupidity of the New Cold War. It seems so strange, twenty-seven years after the fall of the Berlin Wall, to be living through a new Cold War with (as it happens, capitalist) Russia.