Proof that it is not Assad who has senselessly been using chemical weapons on his own people, but the rebels have been using them as false flag attacks to give the U.S. an excuse to continue their illegal war on Syria.

Newsweek. Lost in the hyper-politicized hullabaloo surrounding the Nunes Memorandum and the Steele Dossier was the striking statement by Secretary of Defense James Mattis that the U.S. has "no evidence" that the Syrian government used the banned nerve agent Sarin against its own people. This assertion flies in the face of the White House (NSC) Memorandum which was rapidly produced and declassified to justify an American Tomahawk missile strike against the Shayrat airbase in Syria. Mattis offered no temporal qualifications, which means that both the 2017 event in Khan Sheikhoun and the 2013 tragedy in Ghouta are unsolved cases in the eyes of the Defense Department and Defense Intelligence Agency. Mattis went on to acknowledge that "aid groups and others" had provided evidence and reports but stopped short of naming President Assad as the culprit.

There were casualties from organophosphate poisoning in both cases; that much is certain. Ian Wilkie is an international lawyer, U.S. Seymour M. Hersh · The Red Line and the Rat Line: Erdoğan and the Syrian rebels · LRB 16 April 2014. A Fact-Resistant ‘Group Think’ on Syria. Exclusive: CBS News’ anchor Scott Pelley is known for his clueless journalism which never goes beyond Official Washington’s “group think” and he was at it again in a dangerously provocative “60 Minutes” segment on the sarin gas attack near Damascus, Syria, in 2013, reports Robert Parry. 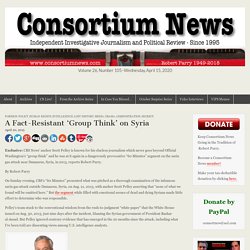 By Robert Parry On Sunday evening, CBS’s “60 Minutes” presented what was pitched as a thorough examination of the infamous sarin gas attack outside Damascus, Syria, on Aug. 21, 2013, with anchor Scott Pelley asserting that “none of what we found will be omitted here.” But the segment while filled with emotional scenes of dead and dying Syrians made little effort to determine who was responsible. Leaked OPCW report suggests Syria gas attack was 'staged,' MIT scientist says. Renowned MIT scientist Theodore Postol says a newly leaked OPCW report shows the supposed 2018 gas attack in Douma, Syria was “staged,” undermining the case for US strikes on the Syrian government. 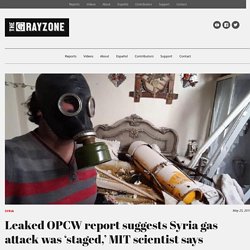 By Aaron Maté. CONFIRMED: Chemical Weapons Assessment Contradicting Official Syria Narrative Is Authentic. The Organization for the Prohibition of Chemical Weapons (OPCW) has begun responding to queries by the press about a leaked document which contradicts official OPCW findings on an alleged chemical weapons attack last year in Douma, Syria. 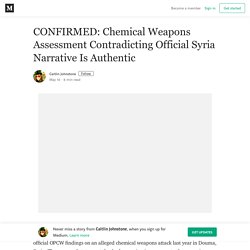 The prepared statement they’ve been using in response to these queries confirms the authenticity of the document. To recap, a few days ago the Working Group on Syria, Propaganda and Media (WGSPM) published a document signed by a man named Ian Henderson, whose name is seen listed in expert leadership positions on OPCW documents from as far back as 1998 and as recently as 2018. It’s unknown who leaked the document and what other media organizations they may have tried to send it to. Engineering-assessment-of-two-cylinders-observed-at-the-Douma-incident-27-February-2019-1.pdf. OPCW Syria Report Cripples Western "Chemical Weapons" Narrative. Fabrication in BBC Panorama Saving Syria's Children: Robert Stuart, Media on Trial, 19 October 2017. Filming of staged chemical attack in Syrian Idlib begins - Russian MoD.

Footage, meant to serve as proof that the Syrian government has conducted a chemical weapons attack in Idlib, Syria, is to be handed to global news outlets by the end of Tuesday, the Russian military claims. 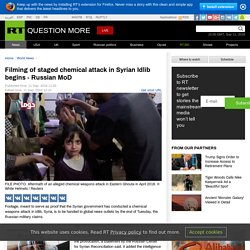 Read more Several Middle East TV channels and a US news channel have been sent to Jisr al-Shughur in Syria’s Idlib Governorate to produce the footage needed for the provocation, a statement by the Russian Center for Syrian Reconciliation said. Chemical Warfare Claims Against Syria Exposed by Independent Research Group. Special to PV. 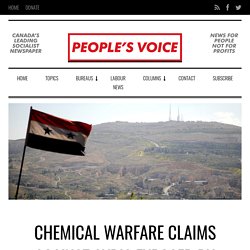 Alleged Chlorine Attacks in Syria 2014-18 – Tim Hayward. Summary Early statements by the US and French governments that a nerve agent had been used in the alleged chemical attack in Douma on 7 April 2018 were rebutted by the OPCW Fact-Finding mission which reported that neither environmental samples obtained on-site nor blood samples from purported victims contained any trace of nerve agent. 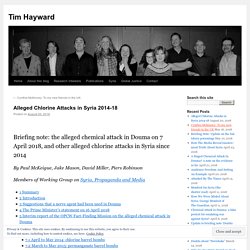 Introduction. False Flag Fail: How Syrian Civilians Derailed White Helmet 'Chemical' Stunt in Eastern Ghouta - 21st Century Wire. Syrian medics 'subjected to extreme intimidation' after Douma attack. The head of the largest medical relief agency in Syria claims that medics who responded to the suspected gas attack in Douma have been subjected to “extreme intimidation” by Syrian officials who seized biological samples, forced them to abandon patients and demanded their silence. 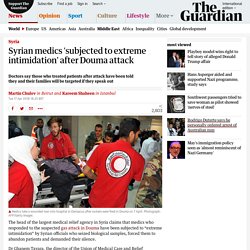 Dr Ghanem Tayara, the director of the Union of Medical Care and Relief Organisations (UOSSM) said doctors responsible for treating patients in the hours after the 7 April attack have been told that their families will be at risk if they offer public testimonies about what took place. A number of doctors who spoke to the Guardian this week say the intimidation from the regime has increased in the past five days, a timeframe that coincides with the arrival in Damascus of a team from the Organisation for the Prevention of Chemical Weapons (OPCW), which aims to determine whether chemical weapons were used. 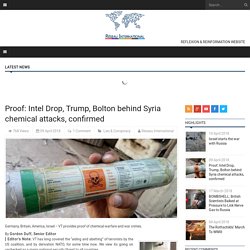 SAA captured gas concentration unit. Made in America, 2015, by Hillrom Company, Michigan [ Editor’s Note: VT has long covered the “aiding and abetting” of terrorists by the US coalition, and by derivation NATO, for some time now. At destroyed Syria lab, workers deny producing toxic weapons. AFP / LOUAI BESHARASyrian soldiers inspect the wreckage of a research centre north of Damascus during a government tour on April 14, 2018 Plastic gloves and face masks lay scattered in the rubble of a Syrian research lab destroyed by Western strikes on Saturday, where an official denied the centre was developing chemical weapons. 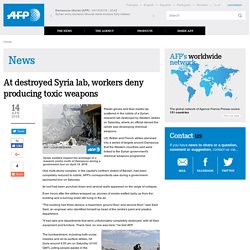 US, British and French strikes slammed into a series of targets around Damascus that the Western countries said were linked to the Syrian government's chemical weapons programme. One multi-storey complex, in the capital's northern district of Barzeh, had been completely reduced to rubble, AFP's correspondents saw during a government-sponsored tour on Saturday. At destroyed Syria lab, workers say they produce antidotes to snake venom not toxic weapons. Plastic gloves and face masks lay scattered in the rubble of a Syrian research lab destroyed by Western strikes on Saturday, where an official denied the centre was developing chemical weapons. 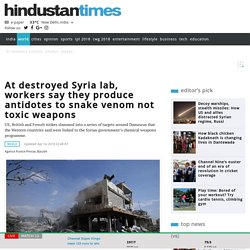 Syria air strike LIVE US, British and French strikes slammed into a series of targets around Damascus that the Western countries said were linked to the Syrian government’s chemical weapons programme. One multi-storey complex, in the capital’s northern district of Barzeh, had been completely reduced to rubble, AFP’s correspondents saw during a government-sponsored tour on Saturday. Its roof had been punched down and several walls appeared on the verge of collapse. Solid evidence Douma ‘chemical attack’ was staged – Lavrov.

FSA terrorists teach children to fake a chemical attack FSA 恐怖分子教孩子假裝受到化學攻擊. US Backed Syrian Rebels Caught Staging Corpses of Dead Children in Douma to Play on Western Emotions. Possible Implications of Faulty US Technical Intelligence in the Damascus Nerve Agent Attack of August 21, 2013. BBC journo confronted after deleting tweet doubting 'staged' scenes in Syria. A BBC journalist expressed skepticism about an alleged chemical attack in Syria that the West has largely – and without evidence – blamed on Bashar Assad. He tweeted that he was tired of "staged" scenes before deleting the post. "Sick and tired of activists and rebels using corpses of dead children to stage emotive scenes for Western consumption.

Then they wonder why some serious journos are questioning part of the narrative," BBC Foreign News Producer Riam Dalati wrote on Twitter. He later deleted that tweet, but not before others in the Twittersphere managed to grab a screenshot of it. Yesterday a BBC journalist (see above) posted a rare admission that #Syria rebels & activists are manipulating photos of dead #Douma children for western media propaganda purposes.

It didn't take long for people on Twitter to speculate as to why Dalati would have deleted the tweet, suggesting the BBC forced him to do so. Why would he delete the tweet? Not so & thank u 4 asking me. Like this story? On Syria & unverifiable, baseless, CW allegations – In Gaza. As US and allies’ hysteria, war propaganda rhetoric, and threats against Syria–threats of (again) bombing Syria–ramp up, sage voices counter the lies. As a number of credible and informed voices have written or spoken on this, I’ll post below a number of interviews and analyses on recent events in Syria and threats to Syria, and indeed threats to the world, even those who are disinterested in the well-being of Syrians.

Former British Ambassador to Syria, Peter Ford, live on BBC radio Scotland was able to purvey a number of important truths–in spite of the host interrupting and talking over Ford many times. Some of the transcript: BBC: “…what should be the response to this use of chemical weapons if it’s proved?” Ford: “The correct response is obviously–and I think a child could see this–to get inspectors on to the alleged site of the alleged offenses. BREAKING! There Has Been NO Chemical Attack in Douma - “Vesti” Correspondent Reports. No Sarin. US Trained Syria’s Al Qaeda ‘Rebels’ By Prof Michel Chossudovsky GlobalResearch.ca November 20, 2017. Vanessa Beeley: Mainstream media is lying - Residents of Ghouta are being slaughtered by Western-backed Al Qaeda. BREAKING: Syrian intelligence warn of false flag chemical weapons attack, hours later terrorists claim Syrian Army conducted chlorine attack - Fort Russ.

Possible implications of bad intelligence. Murky Clues from UN’s Syria Report. Exclusive: The focus of the Syrian crisis has shifted to diplomatic moves for eliminating the government’s chemical weapons stockpile, but the whodunit over the Aug. 21 gas attack outside Damascus remains to be solved after a UN report offered a murky account of what happened, reports Robert Parry. By Robert Parry A United Nations field report about the Aug. 21 chemical weapons assault in Syria suggests a more limited area of attack than an earlier U.S. government report claimed and reveals that some inspected sites showed signs of possible manipulation of evidence. Though the mainstream U.S. news media and some non-governmental organizations highlighted the UN findings that tended to bolster the U.S. government’s case against the Syrian government, a close reading of the 38-page report reveals contradictions to that conclusion. One would have thought that the earlier samples would test more strongly than later samples after two or three more days of exposure to sun and other elements.

SYRIA: Another Chemical Weapon False Flag on the Eve of Peace Talks in Brussels. Smoking Gun — Video Exposes Evidence Tampering At Syrian Chemical Attack Site. To uncover a deception, sometimes it’s necessary to search for subtle indicators which may reveal that something just isn’t right. Immediately after the Trump regime announced the Bashar Al Assad government had gassed its own people, the president authorized a barrage of cruise missiles be sent into Syria purportedly in an attempt to send the message the U.S. would not sit idly by while a rogue government attacks its own people. Trump’s supporters stood as a bulwark behind their president as he led the nation as aggressors to attack a sovereign country. However, others, such as MIT professor Theodore A. Postol, wanted more. They wanted proof. MIT Expert, Fmr DoD Science Advisor Release Damning Report: "Syrian Gas Attack Was Staged"