Is It All In Your Gut? The Sleep-Gut Connection. Remember how fast you usually doze off after that tryptophan-packed Thanksgiving dinner? 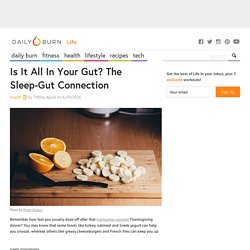 You may know that some foods like turkey, oatmeal and Greek yogurt can help you snooze, whereas others like greasy cheeseburgers and French fries can keep you up at night (hello, heartburn). And according to the National Sleep Foundation, gastrointestinal reflux (GERD) is, in fact, one of the most common issues that can cause sleep disruptions. But did you know that your gut health, also known as the microbiome, plays a major role in sleep, too? Consider the Benefits of Naps…Your Body Will Thank You! Too many people these days react with shock if you suggest more sleep. 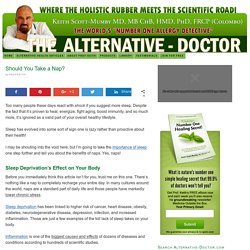 Despite the fact that it’s proven to heal, energize, fight aging, boost immunity, and so much more, it’s ignored as a valid part of your overall healthy lifestyle. Today's Adults Are Feeling the Effects of Sleep Loss. By Melinda Cafferty Quality of sleep is certainly important, but never underestimate the “power of hours” when it comes to restorative rest. 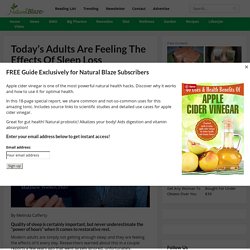 Modern adults are simply not getting enough sleep and they are feeling the effects of it every day. Researchers warned about this in a couple reports a few years ago that went largely ignored, unfortunately. Weekly Fish Consumption Linked to Better Sleep, Higher IQ Study Says. By Natural Blaze Children who eat fish at least once a week sleep better and have IQ scores that are 4 points higher, on average, than those who consume fish less frequently or not at all, according to new findings from the University of Pennsylvania published this week in Scientific Reports, a Nature journal. 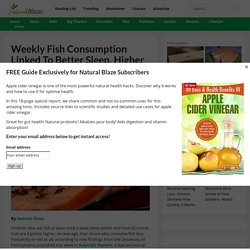 Pssssttt! Are you vegan or plant-based? We have suggestions at the end of this post! Yellow Glasses Might Be a Cure for Insomnia. Natural Blaze Yellow or Amber-tinted glasses may provide relief for insomnia How do you unwind before bedtime? 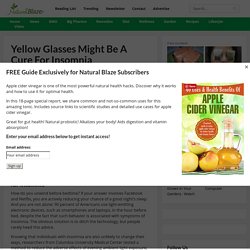 Sleep on It Womens Fitness Australia Summer 2017. Beauty Sleep Women's Health & Fitness March 2017 AU. Teenagers' sleep quality and mental health at risk over late-night mobile phone use. Teenagers’ late-night mobile phone use is harming their sleep and potentially their mental health, say researchers who advised that “physical boundaries” be set over use of such devices in the bedroom. 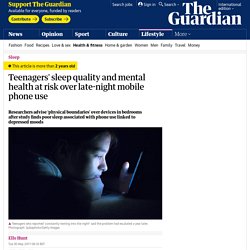 A longitudinal study of 1,101 Australian high school students aged between 13 and 16 found poor-quality sleep associated with late-night texting or calling was linked to a decline in mental health, such as depressed moods and declines in self-esteem and coping ability. Lead researcher, Lynette Vernon of Murdoch University in Perth, said her findings were evidence of the need for curfews for teenagers to be established around use of devices in their bedrooms. Adolescents who used their phones as alarms should replace them with clocks in order to maintain “physical boundaries”, she said.

Vernon said mobile phones had become entrenched in young people’s lives, and many did not have their use restricted. Surge in children being admitted to hospital for sleeping disorders with many kept awake by technology. Health News Health & Fitness UK August 2013. Capital - The worrying effects of working more and sleeping less. “Back in the 1940s people were sleeping on average just a little bit over eight hours a night, and now in the modern age we’re down to around 6.7, 6.8 hours a night,” says Matt Walker, professor of neuroscience and psychology at the University of California, Berkeley. 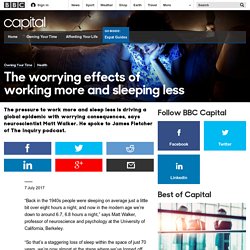 “So that’s a staggering loss of sleep within the space of just 70 years, we’re now almost at the stage where we’ve lopped off 20% of that.” For adults, the modern world is full of things which reduce sleep. Caffeine, which keeps us awake. Alcohol, which fragments our sleep and suppresses dreaming. And although we’ve improved the conditions for sleeping, with everything from better mattresses to smoke-free homes, our controlled environment may also have created problems, Walker says.

“One, which people may find surprising, is central heating and central air conditioning. And then there’s technology. “Technology also causes sleep procrastination. But should we be aspiring to be more like George W. The Sleep Solution Why Your Sleep is Broken and How to Fix It. Ten Things Great Sleepers Do Dr Michael Breus. 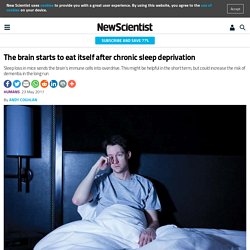 With Polyphasic Sleep, You Can Thrive on as Little as Two Hours per Night. According to the National Institutes of Health, we spend about 26 years of our life asleep, one-third of the total. 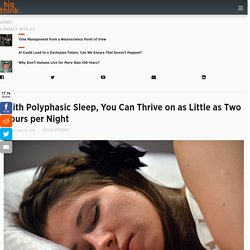 The latest research states that between 6.4 and 7.5 hours of sleep per night is ideal for most people. But some need more and others less. A contingent out there, mostly women, do surprisingly well on just six hours. Salts in the brain control our sleep-wake cycle. Danish research is behind a new epoch-making discovery, which may prove decisive to future brain research. 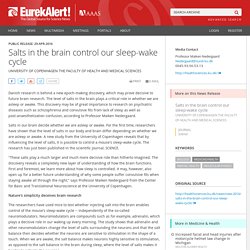 "These salts play a much larger and much more decisive role than hitherto imagined. Nature's simplicity deceives brain research "It's much simpler than previously believed in brain research. Can't sleep? Insomniacs should try camping, say scientists. Let Them Sleep? Later School Start Times Improve Graduation and Attendance. In the current climate of polarized debate about best school practices and policies, it is refreshing to learn that there are some ideas that are supported by research and an emerging bipartisan consensus.

An increasing body of evidence is showing how later school start times are making a difference in students’ lives, including improved educational outcomes and mental well-being.