Impaired proteins and gender differences in dementia. Aida Serra, Wei Juan and Xavier Gallart-Palau The silent epidemic I can still remember the moment my grandmother was no longer able to recognize my face. 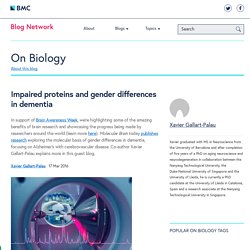 When I was young she taught me how to cycle, she read me books and cared for me when I fell over. Had the affection of these memories also been forgotten? Unfortunately we will never know as she was very soon unable to explain what was in her mind. Dementia is considered the ‘silent epidemic’ of the 21st century which is currently affecting almost 50 million people worldwide. According to recent reports from the American Alzheimer’s Association and the Australian Institute of Health and Welfare, two thirds of patients diagnosed with Alzheimer’s are women. 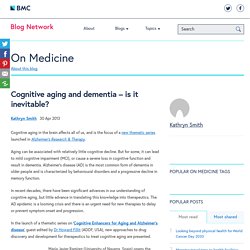 Aging can be associated with relatively little cognitive decline. But for some, it can lead to mild cognitive impairment (MCI), or cause a severe loss in cognitive function and result in dementia. Alzheimer’s disease (AD) is the most common form of dementia in older people and is characterized by behavioural disorders and a progressive decline in memory function. The Survey of Health, Ageing and Retirement in Europe (SHARE): Fight cognitive decline with Sudoku. (November 2016) Getting old provokes fears in many ways. 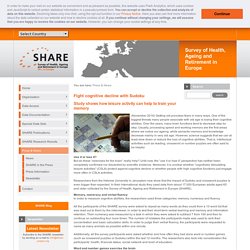 One of the biggest threats many people associate with old age is losing their cognitive abilities. Over the years, many brain functions tend to decrease step by step. Usually, processing speed and working memory are the first areas where we notice our ageing, while semantic memory and knowledge decrease mainly in very old age. However, science suggests that we can at least slow down or reduce the loss of cognitive abilities. That is, intellectual activities such as reading, crossword or number puzzles are often said to be helpful. Use it or lose it? But do these “exercises for the brain” really help? Researchers from the Hebrew University in Jerusalem now show that the impact of Sudoku and crossword puzzles is even bigger than expected.

Resources. The MIT AgeLab collaborates with its sponsors to conduct research to develop original insights, data and platforms for innovation. 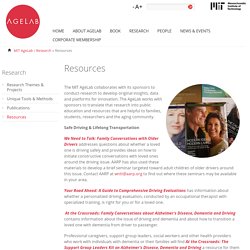 The AgeLab works with sponsors to translate that research into public education and resources that are helpful to families, students, researchers and the aging community. Safe Driving & Lifelong Transportation We Need to Talk: Family Conversations with Older Drivers addresses questions about whether a loved one is driving safely and provides ideas on how to initiate constructive conversations with loved ones around the driving issue. AARP has also used these materials to develop a brief seminar targeted toward adult children of older drivers around this issue. Contact AARP at wntt@aarp.org to find out where these seminars may be available in your area. Some women who find themselves widowed may also find themselves in the position of becoming solely responsible for their own mobility, or for the transportation needs of others in the household.

Zapping Elderly People’s Brains Supercharges Their Working Memory. Memory Games Stimulating the brains of elderly people with electrical currents allowed them to perform just as well on a memory test as people in their 20s — a sign that researchers may have found a noninvasive way to turn back the hands of time when it comes to human memory. 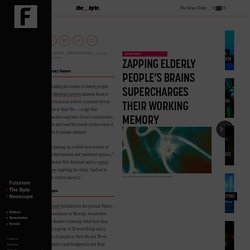 “It’s opening up a whole new avenue of potential research and treatment options,” researcher Rob Reinhart said in a press release regarding the study, “and we’re super excited about it.” All Ages In a study published in the journal Nature Neuroscience on Monday, researchers from Boston University detail how they asked a group of 20-somethings and a group of people in their 60s and 70s to complete a task designed to test their working memory, which is the part of our short-term memory that we use for reasoning and decision-making. Working memory typically begins declining around the time we hit 30 years old, so as expected, the people in their 20s outperformed the older group on the memory task.

Publication Ordering System and Contact Report System. People spent $1.9 billion last year on apps to keep their brains sharp as they age — here’s what actually works. Sandra Wisham had never heard of cognitive training until her senior center in Coral Gables, Fla., hosted a seminar on aging and invited attendees to enroll in a brain-fitness course. 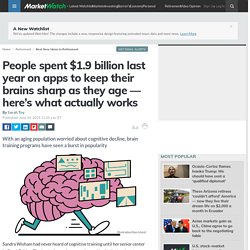 Intrigued, she signed up. “I want to remain independent as long as possible,” says Wisham, 76. She works hard to keep herself physically fit, going to weekly body conditioning and Zumba classes at the retirement center. It made sense to her to do the same for her mind, she says. Cognitive, or brain, training refers to exercises aimed at improving specific aspects of a person’s cognitive functions, such as processing speed, reasoning and memory.

With an aging population worried about cognitive decline and dementia, such training programs have seen a burst in popularity in recent years. No magic bullet But despite the rising interest in cognitive training, evidence of its benefits is still a mixed bag, experts say. Multipronged approach That’s why it’s important to focus on what recent research says does work. איך להביא אדם עם דמנציה לביקור אצל רופא.