10 Fun, Cool YouTube Channels to Help You Learn English. According to YouTube’s statistics, over one billion people all over the world use their video sharing website. 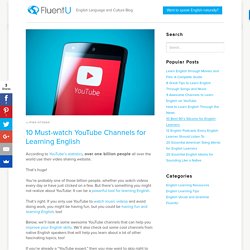 That’s huge! You’re probably one of those billion people, whether you watch videos every day or have just clicked on a few. But there’s something you might not realize about YouTube: It can be a powerful tool for learning English. That’s right: If you only use YouTube to watch music videos and avoid doing work, you might be having fun, but you could be having fun and learning English, too!

Below, we’ll look at some awesome YouTube channels that can help you improve your English skills. If you’re already a “YouTube expert,” then you may want to skip right to the list of recommended channels. Quick Tips for Using YouTube to Learn English 1. If you find a YouTube channel that you like, you’ll probably want to easily return to that channel in the future.

Just look for the “Subscribe” button under a video or on a channel’s YouTube page. 2. 3. Subtitles aren’t always perfect. 905 FREE Movie Worksheets for Your ESL Classroom. Let’s face it: Even the most enthusiastic ESL class sometimes goes through dull periods. 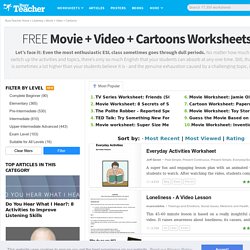 No matter how much you switch up the activities and topics, there’s only so much English that your students can absorb at any one time. Still, that limit is sometimes a lot higher than your students believe it is - and the genuine exhaustion caused by a challenging topic, is very different from boredom that comes from too much repetition.

Teach With Movies - Lesson Plans from movies for all subjects. Serial Taxi. This EFL lesson plan is designed around Serial Taxi a short animation by Paolo Cogliati and the theme of murder mysteries. 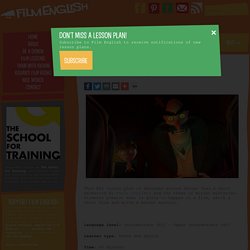 Students predict what is going to happen in a film, watch a short film and write a murder mystery. Language level: Intermediate (B1) – Upper Intermediate (B2) Learner type: Teens and adults Time: 60 minutes Activity: Watching a short film, reading, speaking and writing. Goodnight Mister Tom - Kimstudies. Online Short Films - Watch Free Short Films Online. Kortfilmsklubben - engelska: Lambs - UR Skola. The Storyteller. So before I start the video I just want to warn you that some of the videos and audio records that I will show you are pretty disturbing and I only used them to raise awareness about the problems related to those videos and audio recordings. 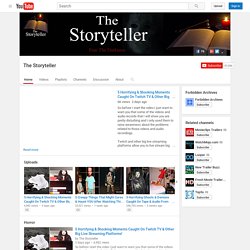 Includes classics, indies, film noir, documentaries and other films, created by some of our greatest actors, actresses and directors. The collection is divided into the following categories: Comedy & Drama; Film Noir, Horror & Hitchcock; Westerns (many with John Wayne); Martial Arts Movies; Silent Films; Documentaries, and Animation. We also have special collections of Oscar Winning Movies and Films by Andrei Tarkovsky and Charlie Chaplin. History of Thanksgiving Day: by Studies Weekly. Student workbook The Boy in the Striped Pyjamas.

The Boy in the Striped Pajamas: Study Guide, Questions & Discussion of Characters & Themes. Written by: Pamela Rice-Linn • edited by: SForsyth • updated: 3/27/2015 Earn a better score on any exam and increase your understanding of John Boyne’s classic novel with this review. 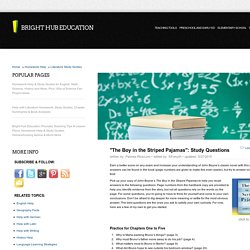 All answers can be found in the book (page numbers are given to make this even easier), but try to answer on your own first! Pick up your copy of John Boyne’s The Boy in the Striped Pajamas to help you recall answers to the following questions. Page numbers from the hardback copy are provided to help you identify evidence from the story, but not all questions rely on the words on the page. For some questions, you’re going to have to think for yourself and come to your own conclusions. References Boyne, John. 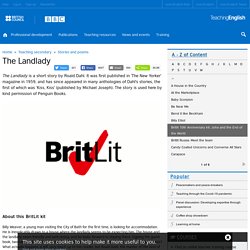 He is inexplicably drawn to a house where the landlady seems to be expecting him. The house and the landlady seem friendly and welcoming, and he looks forward to staying there. Signing the guest book, two names disturb him. Where has he heard them before? The themes drawn from this story include poisoning, embalming and taxidermy as well as a look at witches. The kit, originally written in 2003, was updated in 2007 and 2013. You can also listen to the audio included in the attachments below. How to use this BritLit kit The material is divided into three sections: Pre-reading, After reading, and Word Work. 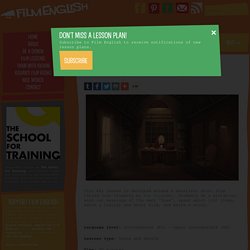 Students do a dictation, work out meanings of the verb ‘lose’, speak about lost items, watch a trailer and short film, and write a story. The Very Hungry Caterpillar by Eric Carle.mp4. Stellaluna. The Rainbow Fish. Romeow & Drooliet. THE PRINCESS AND THE PEA: English fairy tale for kids. LITTLE RED RIDING HOOD - English fairy tale for kids. 'Alma' short animation. The Present.