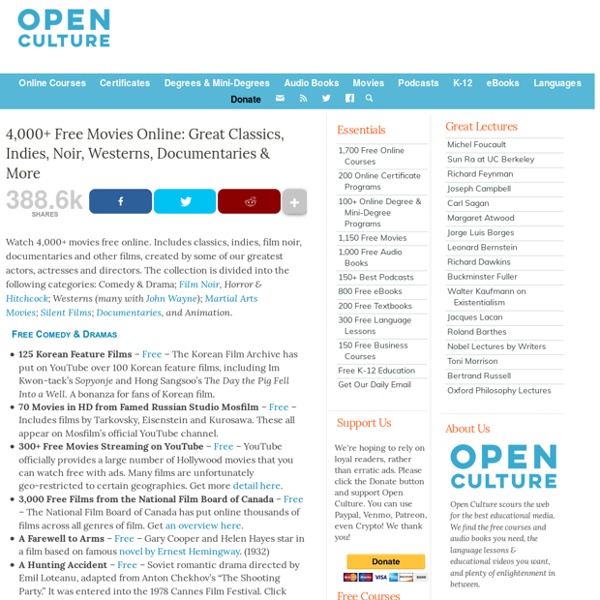 What Happened To The The Lord Of The Rings Characters After The Movies (23 pics) Pics | 19 Mar, 2015 | Views: 8397 | Have you ever wondered what happened to your favorite characters from "Lord of the Rings" and "The Hobbit" after the movies ended? You're about to find out Movies : Free Movies : Download & Streaming by Internet Archive Feature films, shorts , silent films and trailers are available for viewing and downloading. Enjoy!

Your Secret This EFL lesson is based around a short film called Your Secret. What I like most about the film is that it involves the viewers and encourages them to take an active and creative part. I would ask all teachers who use Film English to consider buying my book Film in Action as the royalties which I receive from sales help to keep the website completely free. Language level: Pre-intermediate (A2) – Intermediate (B1) 65 Free Charlie Chaplin Films Online Double click A few things to know about Charlie Chaplin. He starred in over 80 films, reeling off most during the silent film era. In 1914 alone, he acted in 40 films, then another 15 in 1915. By the 1920s, Chaplin had emerged as the first larger-than-life movie star and director, if not the most recognizable person in the world.

7 Image Search Tools That Will Change Your Life Although Google has been playing with some fun image search toys in its lab and the official Google Image Search has recently significantly upped its game, some of its most hyped features — color search, instant scrolling, hover preview — are but mere shadows of sleeker, better versions that geekier, more sophisticated image search tools offer. Here are seven of our favorites. oSkope is a visual search assistant that lets you browse images and products from popular sites like Amazon, eBay, YouTube and Flickr in a highly intuitive way. You can skim thumbnails related to your search keywords and save search results from different services to a visual bookmark bar at the bottom of your browser screen. Thanks, Amrit! CompFight is a Flickr search tool tremendously useful for all your comp stock image needs but also doubling as a visual inspiration ignition engine.

Iconic Game Of Thrones Locations That You Can Actually Visit (28 pics) Category: Pics | Today, 00:02 | Views: 2033 | +3 | "Game of Thrones" might be a fantasy show, but the locations used are very real. They may have fictional names in the show, but you can visit many of the places you see while on "Game of Thrones" in real life. Find out how to get to your favorite location from the show. The road to King’s Landing – Dark Hedges, Northern Ireland

Free Film Noir Movies - 1940's Classic Film A cup of black coffee at midnight and a good old classic movie, it doesn’t get any better. You are free to download and watch any and all of the movies found here, (simply choose save after you click on a title) All movies reside in the public domain. No membership or registration is required. Oscar Week Special: Seven Teaching Resources on Film Literacy The Academy Awards are just around the corner, and there are a number of nominated films that can be great teaching tools for educators this year. With the abundance of media messages in our society, it's important to ensure students are media literate. The Oscars provide a great opportunity to use the year's best films to teach students about media and film literacy. Not to mention, films can also be an engaging teaching tool for piquing interest in a variety of subjects and issues. In this compilation, you'll find classroom resources from around the web that cover many of this year's nominated films, as well as general resources for using film as a teaching tool. First, we'll start with an Edutopia classic, acclaimed director Martin Scorsese discussing the importance of visual literacy and the power of film as a teaching tool.

60 Free Film Noir Movies During the 1940s and 50s, Hollywood entered a “noir” period, producing riveting films based on hard-boiled fiction. These films were set in dark locations and shot in a black & white aesthetic that fit like a glove. Hardened men wore fedoras and forever smoked cigarettes. Women played the femme fatale role brilliantly. Love was the surest way to death. All of these elements figured into what Roger Ebert calls “the most American film genre” in his short Guide to Film Noir.