Twitter. Classical Rhetoric: An Introduction. As many of you know, I read a lot of biographies on the lives of great men from history. 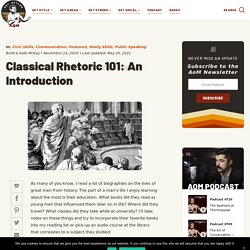 The part of a man’s life I enjoy learning about the most is their education. What books did they read as young men that influenced them later on in life? Where did they travel? What classes did they take while at university? I’ll take notes on these things and try to incorporate their favorite books into my reading list or pick-up an audio course at the library that correlates to a subject they studied. One thing I’ve noticed about my manly heroes is they all took courses in rhetoric at some point during their education. Library of Congress. What Life Was Like In South Africa During Apartheid. JOHANNESBURG (AP) — My mother was furious. 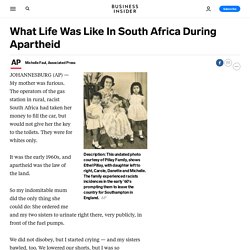 The operators of the gas station in rural, racist South Africa had taken her money to fill the car, but would not give her the key to the toilets. They were for whites only. It was the early 1960s, and apartheid was the law of the land. So my indomitable mum did the only thing she could do: She ordered me and my two sisters to urinate right there, very publicly, in front of the fuel pumps. We did not disobey, but I started crying — and my sisters bawled, too. My widowed mother, Ethel Pillay, had driven us from our home in Zimbabwe, which was then called Rhodesia, to visit family in her native South Africa. There was racism in Rhodesia, too, but it was nothing like the institutionalized code in South Africa that made blacks subhuman — the system that Nelson Mandela later fought to bring down. We had been on the road for more than 15 hours that day. The car trip presented its own challenges. Sometimes those lines got blurred.

Texts about apartheid. Speeches about apartheid "Remarks at the Mandela Memorial" by Barack Obama In his 2013 speech at the memorial service for Nelson Mandela, Barack Obama praised Mandela’s commitment to the principles of Ubuntu and his willingness to seek reconciliation instead of revenge - despite having been unjustly imprisoned for 27 years. 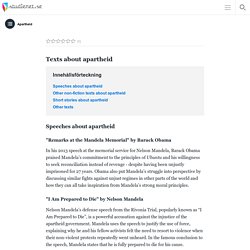 Obama also put Mandela’s struggle into perspective by discussing similar fights against unjust regimes in other parts of the world and how they can all take inspiration from Mandela’s strong moral principles. "I Am Prepared to Die" by Nelson Mandela. Persuasive Speech Outline, Structure and Tips for Delivery. August 13, 2017 - Gini Beqiri - 6 min read A persuasive speech is a speech that is given with the intention of convincing the audience to believe or do something. 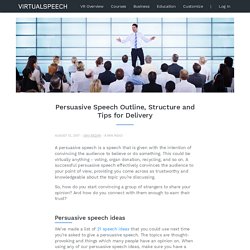 This could be virtually anything - voting, organ donation, recycling, and so on. A successful persuasive speech effectively convinces the audience to your point of view, providing you come across as trustworthy and knowledgeable about the topic you’re discussing. So, how do you start convincing a group of strangers to share your opinion? And how do you connect with them enough to earn their trust? Persuasive speech ideas We’ve made a list of 21 speech ideas that you could use next time you’re asked to give a persuasive speech. Here are a few ideas to get you started: Why are South African cities still so segregated 25 years after apartheid? It doesn’t take long after I drive out of the sleek OR Tambo international airport for the penny to drop. 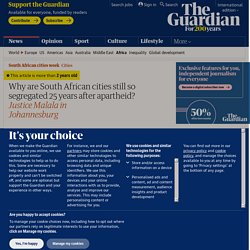 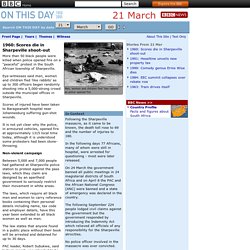 Eye-witnesses said men, women and children fled 'like rabbits' as up to 300 officers began randomly shooting into a 5,000-strong crowd outside the municipal offices in Sharpeville. Scores of injured have been taken to Baragwanath hospital near Johannesburg suffering gun-shot wounds. It is not yet clear why the police, in armoured vehicles, opened fire at approximately 1315 local time today, although it is understood some protesters had been stone-throwing. Non-violent campaign Between 5,000 and 7,000 people had gathered at Sharpeville police station to protest against the pass laws, which they claim are designed by an apartheid government to seriously restrict their movement in white areas. The law states that anyone found in a public place without their book will be arrested and detained for up to 30 days. 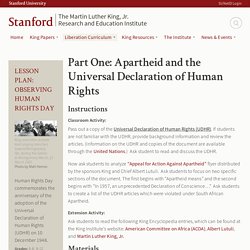 Mandela's long walk to freedom showed we can change the world. “I’ve dreamt about this moment for more than half my life,” Janey Halim, a long-time anti-apartheid activist, whispered to me as Nelson Mandela approached us down the line. 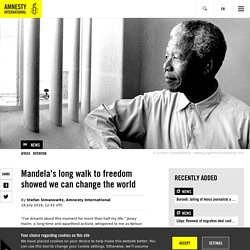 The year was 1993 and I was a recent graduate, in South Africa to work for the African National Congress (ANC) as it transitioned from liberation movement to political party and ultimately, to government. Although he had been expected, news that Mandela had arrived at the shabby headquarters of the ANC Western Cape caused great excitement. I hurried from my office and watched from the open corridor that overlooked the car park as his small entourage emerged from their Mercedes.

Our regional head, Tony Yengeni, was there to open the car door. I looked down as a pair of polished shoes appeared, followed by well-pressed trousers and then, finally, the man himself. Nelson Mandela death: The man who destroyed apartheid. Media playback is unsupported on your device After being jailed for life in 1964, Nelson Mandela became a worldwide symbol of resistance to apartheid. 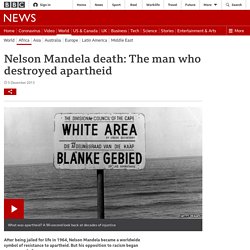 But his opposition to racism began many years before. Born in the rural Transkei on 18 July 1918 into an African royal family largely dispossessed by colonising, his grandfather had been a king and his father was a chief. Afrikaans: the Language of Black and Coloured Dissent. Introduction Afrikaans, the official language during South Africa’s Apartheid era, often occupies a politicised space as the ‘colonial’ language of the White Afrikaner oppressor. 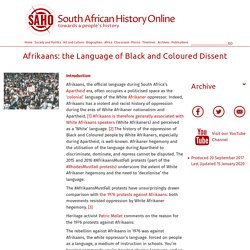 Indeed, Afrikaans has a violent and racist history of oppression during the eras of White Afrikaner nationalism and Apartheid. [1] Afrikaans is therefore generally associated with White Afrikaans speakers (White Afrikaners) and perceived as a ‘White’ language. [2] The history of the oppression of Black and Coloured people by White Afrikaners, especially during Apartheid, is well-known. District 9: South Africa and apartheid come to the movies. Poor aliens. They trek halfway across the galaxy, run out of gas and end up living off cat food in, of all places, 1980s Johannesburg. Then they get the kind of reception that asylum seekers who don't speak the language have come to expect. This is the improbable premise of the surprise sci-fi hit of the year.

District 9 shot to the top of the US box office in its opening weekend and earned the kind of reviews that eluded George Lucas even the first time around. Its modest credentials include a 29-year-old debutant director, a budget of just $30m and a cast of unknowns. But District 9, released in Britain next month, also boasts two points of instant recognition. Breaking: It's now 'illegal' to display the apartheid flag in South Africa. Judge Phineas Mojapelo will have his name remembered for a very long time in South Africa. He’s the magistrate who handed down the momentous decision to outlaw the old apartheid flag from public display in the country, some 25 years after the cruel regime was finally defeated.

Apartheid flag banned – what you need to know The Black Monday protests, which flared-up in October 2017, forced the Nelson Mandela Foundation and SA Human Rights Commission to take action. The Freedom Charter Called for Equality in South Africa. The Freedom Charter was a document ratified at the Congress of the People held at Kliptown, Soweto, South Africa in June 1955 by the various member bodies of the Congress Alliance. The policies set out in the Charter included a demand for a multi-racial, democratically elected government, equal opportunities, the nationalization of banks, mines, and heavy industries, and a redistribution of land. BBC World Service. Have You Heard From Johannesburg. "Best Documentary of 2010. " "EXEMPLARY… A TRIUMPH of maximalist filmmaking.

And you won't look at your watch once. Grade 11 - Apartheid South Africa 1940s to 1960s. Nelson Mandela Foundation. Mandela Day. When Did Apartheid End and How? Apartheid Explained.