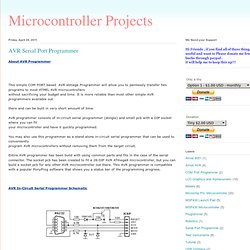 It is more reliable than most other simple AVR programmers available out there and can be built in very short amount of time. AVR programmer consists of in-circuit serial programmer (dongle) and small pcb with a DIP socket where you can fit your microcontroller and have it quickly programmed. You may also use this programmer as a stand alone in-circuit serial programmer that can be used to conveniently program AVR microcontrollers without removing them from the target circuit. Entire AVR programmer has been build with using common parts and fits in the case of the serial connector. AVR In-Circuit Serial Programmer Schematic Ensures that the chip is receiving exactly +5V voltage it ensures error free programming. Pony Prog :The Programming software !! Click on "Yes" button to confirm the programming. [Débutant] Avant d'acheter. Raspberry Pi Accessories. Infrared camera – you asked us, so we’re making them!

You may have heard rumours about something we’re calling Pi NoIR (Pi, no infrared) – it’s been a very badly kept secret. 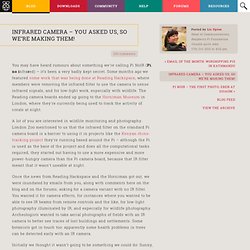 Some months ago we featured some work that was being done at Reading Hackspace, where members were removing the infrared filter to use the camera to sense infrared signals, and for low-light work, especially with wildlife. The Reading camera boards ended up going to the Horniman Museum in London, where they’re currently being used to track the activity of corals at night. A lot of you are interested in wildlife monitoring and photography. Once the news from Reading Hackspace and the Horniman got out, we were inundated by emails from you, along with comments here on the blog and on the forums, asking for a camera variant with no IR filter.

Nocturnal Wildlife Watching with Pi NoIR. Using the new Raspberry Pi camera for time-lapse photography of creatures that move in the night. 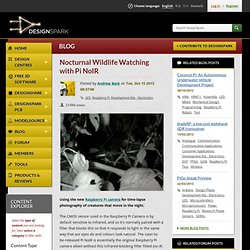 The CMOS sensor used in the Raspberry Pi Camera is by default sensitive to infrared, and so it's normally paired with a filter that blocks this so that it responds to light in the same way that our eyes do and colours look natural. The soon-to-be-released Pi NoIR is essentially the original Raspberry Pi camera albeit without this infrared-blocking filter fitted (no IR, noir, get it?) The extended spectral range of the Pi NoIR means that it can be put to use in all manner of interesting applications. The project described here used it with a source of infrared illumination to create a simple night-vision camera. Setup Since the aim was to have something that could be left untethered and outdoors overnight, a waterproof enclosure was used to house the electronics and with a rechargeable 10400mAh Li-Ion battery pack for power. Untitled. Boîtier pour caméra Raspberry PI Noir - Kubii.fr.

Raspberry Pi - Camera Tutorial... Motion - Ip Camera Possible. This was/is a good thread . it got me going on the road to using motion with my raspicamera. there were some dots for me to connect however, from the discussion above, since I'd never done webservers and thought that "cgi" had something to do with computer graphics. there is good article on setting up a simple server in the last issue of Magpi by Jason Davies, "Setting up a simple intranet". 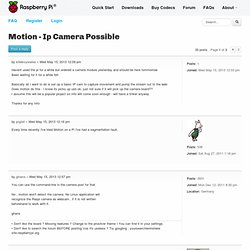 This will get your apache2 server running. then I found the following on enabling a cgi scripts for apache [url] and i did need to make the permissions change suggested above Code: Select all sudo chmod 777 /dev/vchiq i'm not sure what this permission changes means but suspect i have to do it on every reboot. first i had the raspicam server working, then it wouldn't post pictures, then I eventually figured out that i had to give the permissions again. now begins the fun with motion. Raspberry Pi Camera Module Motion Detection and Time Lapse Project using Python Script Part1. Lightweight python motion detection.

HiThere have been a few questions regarding how to run the motion detect python script or other commands on the raspberry pi in the background (so you can logout or disconnect from the terminal and still have program run in the background). 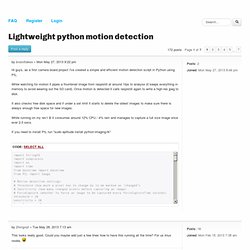 I will try to explain a few basic steps (assumes some previous knowledge) 1 Make sure you can ssh or xterm to raspberry pi (or use a local attached monitor and keyboard but cut and paste won't work unless you run GUI desktop Xterm session then use web browser access code web page then copy/paste code from web page to text editor)You could also create required script files using an appropriate computer text editor and ftp the files to the pi or copy to a network share that is mounted on the raspberry and copy the files to the pi using the cp command. 2 Create the python script on the pi.eg Use putty to ssh into pi then execute Code: Select all nano motiondetect.py.

Raspberry Pi: Completely Wireless IP Camera. Solar Battery Pack, WiFi, Logitech Camera, Raspbian. This is one of the first projects I did with my Raspberry Pi. 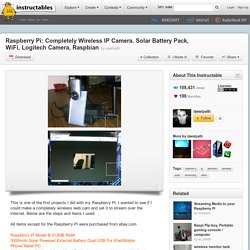 I wanted to see if I could make a completely wireless web cam and set it to stream over the internet. Below are the steps and items I used. All items except for the Raspberry Pi were purchased from ebay.com Raspberry Pi Model B 512MB RAM5000mAh Solar Powered External Battery Dual USB For iPad/Mobile Phone/Tablet PC802.11n/g/b 150Mbps Mini USB WiFi Wireless Adapter Network LAN Card w/AntennaRaspberry Pi Case Raspi Enclosure Box with GPIO Access and Logo (optional)Logitech QuickCam for Notebooks Deluxe Laptop Webcam (Other web cams may work) The first thing you want to do is get the Raspian Wheezy Image from here. Go to Expand_Rootfs to allow the operating system to use the entire SD card. Go to SSH and Enable it. Save changes and reboot the Raspberry Pi. Once booted up, you will want to download updates. sudo apt-get update This can take sometime to complete. Next we want to setup the WiFi adapter.