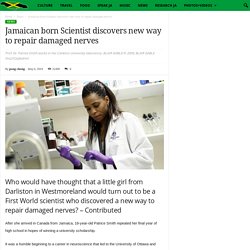 It was a humble beginning to a career in neuroscience that led to the University of Ottawa and Harvard University, and the discovery, announced Thursday, of a new way to coax damaged nerves to repair themselves. Her experiments, which build on the growing understanding of how a baby’s brain is different from that of an adult, could lead to novel therapies for brain or spinal cord injuries.

Until about the age of two, the neurons in the human brain are still growing, stretching out long arms known as axons to form connections and build networks and circuits. After that, experience and learning shape those connections largely through pruning, said Dr. Smith, now 32 and running her own lab at Carleton University. 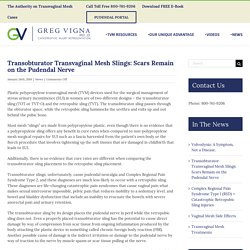 The transobturator sling passes through the obturator space, while the retropubic sling hammocks the urethra and exits up and out behind the pubic bone. Most mesh “slings” are made from polypropylene plastic, even though there is no evidence that a polypropylene sling offers any benefit in cure rates when compared to non-polypropylene mesh surgical repairs for SUI such as a fascia harvested from the patient’s own body or the Burch procedure that involves tightening up the soft tissues that are damaged in childbirth that leads to SUI. Additionally, there is no evidence that cure rates are different when comparing the transobturator sling placement to the retropubic sling placement. Dr. Dr. Possover International Medical Center AG. Pudendal Neuralgia, Pudendal Neuropathy (Pelvic Pain) Nerve injuries associated with gynaecological surgery - Kuponiyi - 2014 - The Obstetrician &amp; Gynaecologist - Wiley Online Library. Introduction Iatrogenic nerve injury following gynaecological surgery occurs more commonly than is recognised and is a significant cause of postoperative neuropathy. 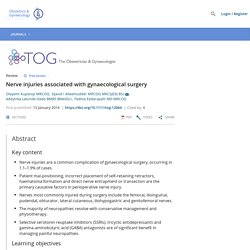 Patient mal‐positioning, improper incision sites and self‐retaining retractors are major contributors to the origins of intraoperative gynaecological nerve injury. Pelvic pain after surgery for prolapse 2012. Types of Female Sexual Dysfunction. Despite its prevalence and adverse effect on women’s quality of life, female sexual dysfunction (FSD) is often not addressed for a myriad of reasons. 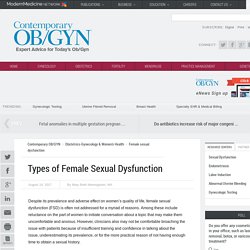 Among these include reluctance on the part of women to initiate conversation about a topic that may make them uncomfortable and anxious. However, clinicians also may not be comfortable broaching the issue with patients because of insufficient training and confidence in talking about the issue, underestimating its prevalence, or for the more practical reason of not having enough time to obtain a sexual history. In 2011, the American College of Obstetricians and Gynecologists (ACOG) issued clinical management guidelines for gynecologists to help provide information on (FSD).1 Developed by the Committee on Practice Bulletins – Gynecology, the guidelines offer clinicians a basic understanding of normal female sexual response, criteria for diagnosing female sexual dysfunction, and current management strategies.

Reference. MRI or MR  Lies? The  Case of Wrong  Diagnosis of Pudendal Nerve Entrapment . - Sher Pelvic Health and Healing, LLC. Pudendal Neuralgia. The prevalence of pudendal neuralgia is unknown, although some have estimated a prevalence of 1/100,000 people. 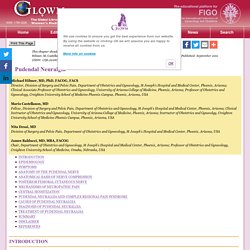 Spinosa et al.4 documented an incidence of 1% in the general population, affecting women more than men. Orphanet, www.ophra.net, a European website providing information about orphan drugs and rare diseases, states that pudendal neuralgia is diagnosed in 4% of patients undergoing treatment for chronic pelvic pain. However, from our experience, the incidence may be significantly higher, with women comprising 70% of our diagnosed patients. Pelvic Health and Rehabilitation Center. After Thanksgiving we will be publishing the third blog in our pudendal neuralgia series that will focus on the pudendal nerve entrapment diagnosis and the decompression surgery that’s associated with it. 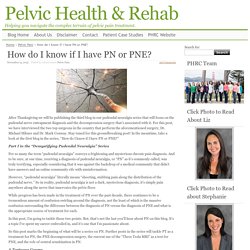 For this post, we have interviewed the two top surgeons in the country that perform the aforementioned surgery, Dr. Michael Hibner and Dr. Mark Conway. Stay tuned for this groundbreaking post! Neuromuscular Info - Disorders and diagnostics - Lumbosacral Plexus neuropathies. 03 February 2009 Lumbosacral plexus neuropathies are rare syndromes, which are caused by damage to the nerve bundles in the lumbosacral plexuses. 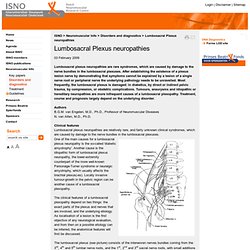 After establishing the existence of a plexus lesion nerve by demonstrating that symptoms cannot be explained by a lesion of a single nerve root or peripheral nerve the underlying pathology needs to be unravelled. Most frequently, the lumbosacral plexus is damaged: in diabetics, by direct or indirect pelvic trauma, by compression, or obstetric complications. Tumours, aneurysms and idiopathic or hereditary neuropathies are more infrequent causes of a lumbosacral plexopathy. Treatment, course and prognosis largely depend on the underlying disorder. Authors. Neurontin and Lyrica are a Death Sentence for New Brain Synapses. By: Byron J. 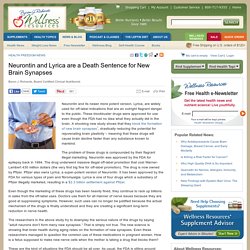 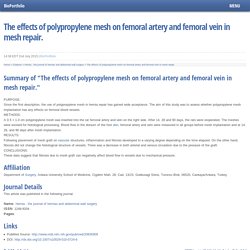 " PURPOSE: Since the first description, the use of polypropylene mesh in hernia repair has gained wide acceptance. The aim of this study was to assess whether polypropylene mesh implantation has any effects on femoral blood vessels. METHODS: A 0.5 × 1.0 cm polypropylene mesh was inserted into the rat femoral artery and vein on the right side. After 14, 28 and 90 days, the rats were reoperated. The meshes were excised for histological processing. Affiliation Department of Surgery, Ankara University School of Medicine, Cigdem Mah. 28. Journal Details This article was published in the following journal. Name: Hernia : the journal of hernias and abdominal wall surgeryISSN: 1248-9204Pages: Links Medical and Biotech [MESH] Definitions.