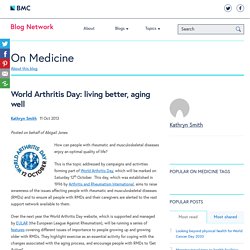 This is the topic addressed by campaigns and activities forming part of World Arthritis Day, which will be marked on Saturday 12th October. The Survey of Health, Ageing and Retirement in Europe (SHARE): Little exercise is better than none. (2017 January) Half an hour, five days per week – that is what current public health guidelines suggest referring to the amount of exercise you should do as an older adult to stay healthy. 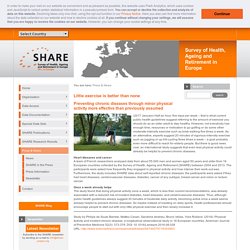 However, not everybody has enough time, resources or motivation to go golfing or do some other moderate-intensity exercise such as brisk walking five times a week. As an alternative, experts suggest 20 minutes of vigorous-intensity exercise such as jogging or up-hill-cycling three times a week – a goal probably even more difficult to reach for elderly people. But there is good news now: an international study suggests that even less physical activity could already be helpful to prevent chronic diseases. Heart diseases and cancer A team of French researchers analysed data from about 55.000 men and women aged 50 years and older from 16 European countries collected by the Survey of Health, Ageing and Retirement (SHARE) between 2004 and 2013. 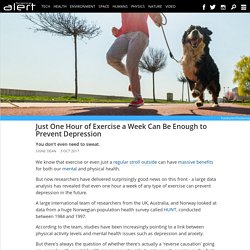 But now researchers have delivered surprisingly good news on this front - a large data analysis has revealed that even one hour a week of any type of exercise can prevent depression in the future. A large international team of researchers from the UK, Australia, and Norway looked at data from a huge Norwegian population health survey called HUNT, conducted between 1984 and 1997. According to the team, studies have been increasingly pointing to a link between physical activity levels and mental health issues such as depression and anxiety. But there's always the question of whether there's actually a 'reverse causation' going on - people with mental health issues may struggle to get enough exercise in the first place. Sometimes such research also conflates depression and anxiety together, even though each can have different risk factors and biological mechanisms. 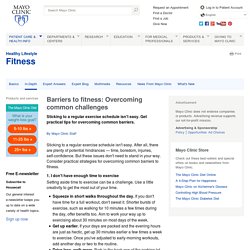 Get practical tips for overcoming common barriers. By Mayo Clinic Staff Sticking to a regular exercise schedule isn't easy. After all, there are plenty of potential hindrances — time, boredom, injuries, self-confidence. 1. Setting aside time to exercise can be a challenge. Squeeze in short walks throughout the day. 2. A machine that used to be considered punishment is now a $1.4 billion fitness industry. (Yu-Ming Huang for The Washington Post) As the weather turns colder, Jen Forman will do what she’s always done to get her runs in: She’ll go to her treadmill in her home, press start and run until she’s done. 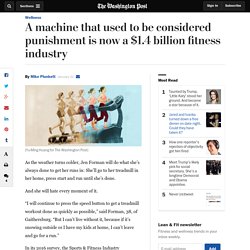 And she will hate every moment of it. How harmful is too much sitting? It’s time to step away from the computer and read this: According to one study, people who spend more than four hours a day in front of a screen have a higher risk of early death in general and a higher risk of events related to heart disease, such as chest pain or heart attack. 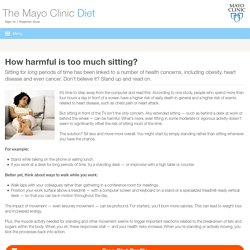 But sitting in front of the TV isn't the only concern. Any extended sitting — such as behind a desk at work or behind the wheel — can be harmful. What's more, even fitting in some moderate or vigorous activity doesn't seem to significantly offset the risk of sitting most of the time. The solution? Sit less and move more overall. For example: Stand while talking on the phone or eating lunch. Better yet, think about ways to walk while you work: Walk laps with your colleagues rather than gathering in a conference room for meetings.

The impact of movement — even leisurely movement — can be profound. Physical activity for seniors - Better Health Channel. The physical decline of older age Only around one in 10 Australians over the age of 50 exercises enough to gain any cardiovascular benefit. 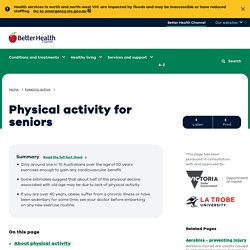 Some estimates suggest that about half of the physical decline associated with old age may be due to a lack of physical activity. It has been suggested that people over the age of 65, more than any other age group, require adequate fitness levels to help them maintain independence, recover from illness and reduce their high risk of disease. Various studies show that it is never too late to get fit.

The human body responds to exercise, no matter what its age, and there are many health benefits. My 2 Cents: Cardiorespiratory Fitness vs Dementia Mortality. Many thanks to Dr. 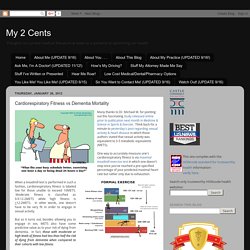 Michael M. for pointing out this fascinating study released online prior to publication next month in Medicine & Science in Sports & Exercise. Think back for a minute to yesterday's post regarding sexual activity & heart disease in which those authors stated that sexual activity was equivalent to 3-5 metabolic equivalents (METS). One way to accurately measure one's cardiorespiratory fitness is via maximal treadmill exercise test in which one doesn't stop once you've reached a pre-specified percentage of your predicted maximal heart rate but rather only due to exhaustion. When a treadmill test is performed in such a fashion, cardiorespiratory fitness is labeled low for those unable to exceed 10METS. 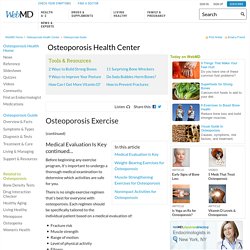 Before beginning any exercise program, it's important to undergo a thorough medical examination to determine which activities are safe for you. There is no single exercise regimen that's best for everyone with osteoporosis. Adaptip. LLT Home Exercise Booklets - Later Life Training. We are pleased to be able to offer free downloads of our own home exercise booklets. 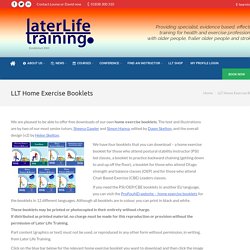 The text and illustrations are by two of our most senior tutors, Sheena Gawler and Simon Hanna, edited by Dawn Skelton, and the overall design (v2) by Helen Skelton. We have four booklets that you can download – a home exercise booklet for those who attend postural stability instructor (PSI) led classes, a booklet to practice backward chaining (getting down to and up off the floor), a booklet for those who attend Otago strength and balance classes (OEP) and for those who attend Chair Based Exercise (CBE) Leaders classes. If you need the PSI/OEP/CBE booklets in another EU language, you can visit the ProFouND website – home exercise booklets for the booklets in 12 different languages. Although all booklets are in colour, you can print in black and white. These booklets may be printed or photocopied in their entirety without charge. Physical Activity and Older Adults. Sitting Disease. Global recommendations on physical activity for health. Start active, stay active: report on physical activity in the UK.