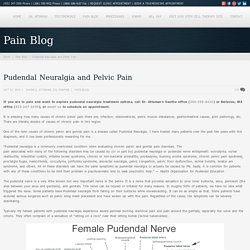 There are literally dozens of causes of chronic pain in this region. One of the rarer causes of chronic pelvic and genital pain is a disease called Pudendal Neuralgia. I have treated many patients over the past few years with this diagnosis, and it has been professionally rewarding for me. Maakt een slapeloze nacht ons gevoeliger voor pijn? · Gezondheid en wetenschap. Ongoing Thigh Pain: Experts Recommend Early Sling Revision. New procedure gives hope of relief for women with pelvic pain. As many as one in four women in the U.S. suffer from chronic pelvic pain. 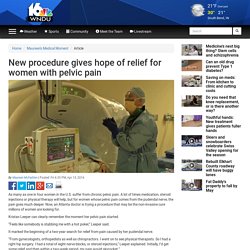 A lot of times medication, steroid injections or physical therapy will help, but for women whose pelvic pain comes from the pudendal nerve, the pain goes much deeper. Now, an Atlanta doctor is trying a procedure that may be the non-invasive cure millions of women are looking for. Kristan Leeper can clearly remember the moment her pelvic pain started. “Feels like somebody is stabbing me with a hot poker,” Leeper said. Ostermeijerbp1005. Supported by a grant from the George and Irene Lindler Foundation (Houston). 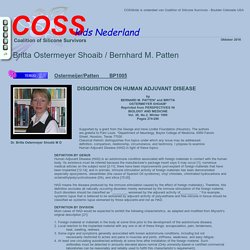 The authors are grateful to Pam Louis. *Department of Neurology, Baylor College of Medicine, 6550 Fannin Street, Houston, Texas 77030 Classical rhetoric distinguishes five topics under which any issue may be addressed: definition, comparison, relationship, circumstance, and testimony. I propose to examine Human Adjuvant Disease (HAD) in light of these topics. DEFINITION BY GENUSHuman Adjuvant Disease (HAD) is an autoimmune condition associated with foreign materials in contact with the humanbody.

HAD means the disease produced by the immune stimulation caused by the effect of foreign material(s). Surgical mesh implants may cause autoimmune disorders. Surgical mesh implants, often used for hernia or gynecological repair, may be the reason so many patients report symptoms of an autoimmune disorder, according to a University of Alberta rheumatologist. 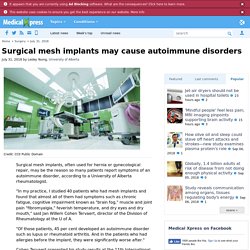 "In my practice, I studied 40 patients who had mesh implants and found that almost all of them had symptoms such as chronic fatigue, cognitive impairment known as "brain fog," muscle and joint pain "fibromyalgia," feverish temperature, and dry eyes and dry mouth," said Jan Willem Cohen Tervaert, director of the Division of Rheumatology at the U of A. "Of those patients, 45 per cent developed an autoimmune disorder such as lupus or rheumatoid arthritis. And in the patients who had allergies before the implant, they were significantly worse after. " Mesh devices may be to blame for autoimmune symptoms.

The scandal surrounding surgical mesh implants isn’t going away and new research might link the devices to being responsible for patients developing autoimmune disorders. 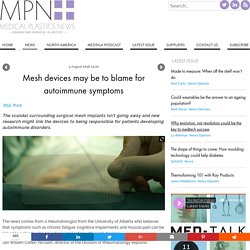 The news comes from a rheumatologist from the University of Alberta who believes that symptoms such as chronic fatigue, cognitive impairments and muscle pain can be linked to patients who have been implanted with mesh devices. Jan Willem Cohen Tervaert, director of the Division of Rheumatology explains. “In my practice, I studied 40 patients who had mesh implants and found that almost all of them had symptoms such as chronic fatigue, cognitive impairment known as “brain fog,” muscle and joint pain “fibromyalgia,” feverish temperature, and dry eyes and dry mouth,” Tervaert said.

“Of those patients, 45% developed an autoimmune disorder such as lupus or rheumatoid arthritis. And in the patients who had allergies before the implant, they were significantly worse after.” De farmaceutische industrie maakt meer slachtoffers dan de maffia, zegt deze hoogleraar. De dokter als dealer: ‘In Nederland is allang sprake van een stille opioïde-epidemie’ Health Organization for Pudendal Education. Austria Dr. 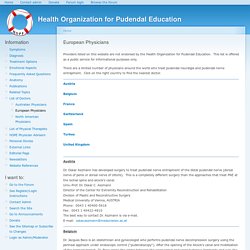 Oskar Aszmann has developed surgery to treat pudendal nerve entrapment of the distal pudendal nerve (dorsal nerve of penis or dorsal nerve of clitoris). This is a completely different surgery than the approaches that treat PNE at the ischial spine and alcock's canal. Univ. When Doctors Downplay Women’s Health Concerns. Pudendal Nerve Irritation and Perineal Pain. Pudendal nerve irritation, pudendal nerve entrapment, and perineal pain are all varying levels of symptoms related to pressure being created along the pathway of the pudendal nerve that creates very uncomfortable symptoms including: -pain referring into the perineum, pelvic floor, genitals and internally in women-pain into the genitals and perineum and around the back passage in men-pain and tightness into the back of the hips-posterior pelvic pain or pubic pain-pelvic/perineal pain that is worse with sitting or when stressed, but that improves with standing or sitting on the toilet seat-pain that is worse in tight clothing The pudendal nerve originates from the lumbo-sacral plexus (L4-S4). 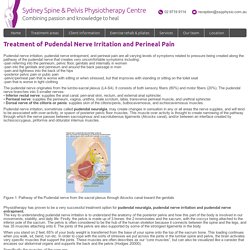 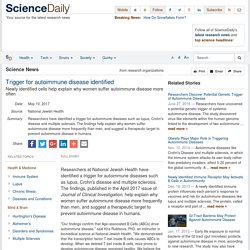 As many as one in four women in the U.S. suffer from chronic pelvic pain. 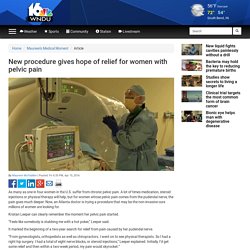 A lot of times medication, steroid injections or physical therapy will help, but for women whose pelvic pain comes from the pudendal nerve, the pain goes much deeper. Now, an Atlanta doctor is trying a procedure that may be the non-invasive cure millions of women are looking for. Vier cruciale tips bij chronische pijn - Medische Informatie. Multidisciplinair Allergieteam biedt allergiepatiënt gespecialiseerde zorg op maat - azlink. Dodelijke pijnstiller sterk in opmars in ons land. Understand pain to change pain. Positive work done at SIP 2017 There were some important steps forward at SIP 2017 last week when stakeholders got together to discuss the societal issue of pain and agree ways forward. 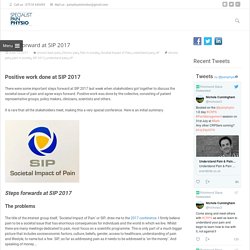 Positive work was done by the collective, consisting of patient representative groups, policy makers, clinicians, scientists and others. It is rare that all the stakeholders meet, making this a very special conference. Here is an initial summary. Pijndagboek. Gynecological Management of Neuropathic Pain. Pudendal Neuralgia.

Nerve entrapment involving mesh requires lengthy surgery. While other surgeons may trim the mesh, I firmly believe in removing all the mesh because we cannot determine which part of the mesh is causing pain. Outcomes data from France show that approximately 30%-40% of patients are pain free after surgical decompression, with another 30% reporting improvement in pain and 30% reporting no change in their pain levels (Eur. Urol. 2005;47:403-8). At our institution, using national scientific standards for the reporting of pain and extent of pain improvement, we have found that 70% of patients who undergo transgluteal surgical decompression have at least a 20% improvement in pain.

Pijnproblemen in de praktijk. Wat is brainfog (hersenmist) – Stichting Chronische Zenuwpijn. Optogenetic silencing of Nav1.8-positive afferents alleviates inflammatory and neuropathic pain. New procedure gives hope of relief for women with pelvic pain. Het wondermiddel tegen pijn! Central Sensitization in Chronic Pain. Pain itself can change how pain works, resulting in more pain with less provocation This is a jargon-to-English translation of an important scientific paper by Clifford Woolf, a rock star of a pain researcher, published in Pain in Oct 2010.

Everyone needs to know this: it’s owner’s manual stuff. After the translation, I offer some ideas about what it all means for patients and professionals. National Pain Strategy Released – Now the Work Begins – National Pain Report. By Ed Coghlan The long awaited National Pain Strategy has been released. “This is our country’s first coordinated effort to develop a plan to address the care of those in pain. It is a seminal event because it calls for a complete transformation in pain prevention, care and education,” Sean Mackey M.D., who directs the Stanford University Pain Program, told the National Pain Report. Oorzaak van Fibromyalgie gevonden! – HEALTH PLANS. Obturator Nerve Anatomy - Everything You Need To Know - Dr. Nabil Ebraheim. NIEUWS ITEMS - chronische urogynaecologische pelvische pijn. Video Q&A: what is ASIA? An interview with Yehuda Shoenfeld. Professor Yehuda Shoenfeld is the founder and head of the Zabludowicz Center for Autoimmune Diseases at the Sheba Medical Center, which is affiliated to the Sackler Faculty of Medicine at Tel-Aviv University, Israel.

He is also the Incumbent of the Laura Schwarz-Kipp Chair for Research of Autoimmune Diseases at Tel-Aviv University. His clinical and scientific works focus on autoimmune and rheumatic diseases, and he has been the recipient of multiple awards, including a Life Contribution Prize in Internal Medicine in Israel, 2012. Pas op met siliconen borstprotheses bij allergie - VUmc. PVVN. How Chronic Pain Alters the Immune System – Neuroscience News. Epigenetics may bring us one step closer to better treatments for chronic pain. Chronic pain may reprogram the way genes work in the immune system, according to a new study by McGill University researchers published in the journal Scientific Reports. “We found that chronic pain changes the way DNA is marked not only in the brain but also in T cells, a type of white blood cell essential for immunity”, says Moshe Szyf, a professor in the Faculty of Medicine at McGill. “Our findings highlight the devastating impact of chronic pain on other important parts of the body such as the immune system.”

Chronic pain – pain that lasts six months or more — is one of the most common causes of disability worldwide. Chronic pain changes our immune systems. ASIA: A New Way to Put the Puzzle Together. How to Use Pain Psychology Techniques to Reduce Anxiety, Depression, Anger and Guilt. Is depression a kind of allergic reaction? 16 Dingen die mensen met chronische zenuwpijn willen dat anderen dit weten. How to Cope When Chronic Pain Affects Friends, Family & Social Life.