284d36df54cb60ace63ba8fc37bead86ee30. Polishing the DIRT – Symbol Marking – Teach innovate reflect. Marking vs Feedback: The Journey by Lauren Murphy and Sunita Vyas - Latest News & Social - Inspire Partnership. The Development Process “All parts of the education system have a role to play in reducing the unnecessary tasks that take teachers and school leaders away from their core task: improving outcomes for students.” 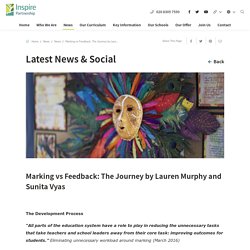 Eliminating unnecessary workload around marking (March 2016) Following on from the release of this publication from the DfE, leaders from the Inspire Partnership were eager to hear the views of staff. Responses from an end-of-year teacher survey showed that a contributing factor to teacher workload was time spent on marking. At the same time teachers were sceptical with regards to the impact the marking was having on the progress of the pupils. “I spend hours marking every day and a lot of the time, the pupils spend less than 5 minutes responding.” “Quite often the feedback I am providing doesn’t feel purposeful and doesn’t necessarily lead to children making rapid progress, which is mostly because the feedback is being given too late, after the lesson has already taken place.”

Ensuring students respond to feedback: Responsive Teaching 2019 update. Feedback improves learning by changing students’ knowledge, understanding or behaviour, but only if students act on it. 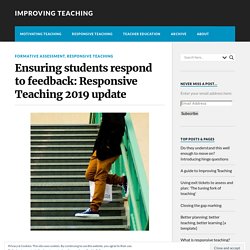 As Royce Sadler put it: Information about the gap between actual [students’ current] and reference [desired] levels is considered as feedback only when it is used to alter the gap.Sadler, 1989, p.121 By this tough standard, much of the marking I did as a new teacher wasn’t feedback: students seldom acted upon it or improved as a result. We could argue that Sadler is too demanding, but he highlights an important problem: There is ample evidence of both anecdotal and scientific nature that a number of students do not use the feedback they receive, and therefore do not realize the potential of feedback for learning.Jonsson, 2013, p.64.

#FiveWays of Giving Effective Feedback as Actions. NOTE To Teach First #TDC2019 Delegates: Slides available here: Teach First Marking If teachers are going to have a significant impact with the feedback they give, it needs to lead to improved outcomes for students. 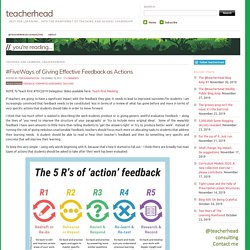 I am increasingly convinced that feedback needs to be constituted less in terms of a review of what has gone before and more in terms of very specific actions that students should take in order to move forward. How we stopped marking - Teaching. When I decided I just had to do something about reducing the crushing workload that our marking policy was inflicting on our teachers, I shared with the staff accounts of what a couple of other schools had done, such as Shaw Primary Academy. 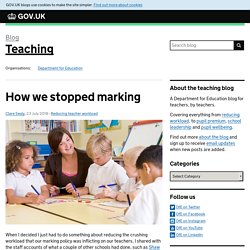 For a few weeks, we tried not physically marking any work at all, but instead, analysing work for common errors and misunderstandings and using these as the basis for teaching in the next lesson. Instead of writing ‘next steps’ for each child, the next lesson was the next step. We found that this reduced the workload of marking by two thirds; instead of spending 3 hours marking a pile of books, teachers would spend an hour, and that included planning the next lesson. Tweaking the approach After half a term of experimenting, my staff and I decided to tweak our approach. Marking Crib Sheet & Whole Class Feedback – mrthorntonteach. Recently, I have been looking at our departments marking procedures and how best to be effective markers (obviously reducing workload is key!). 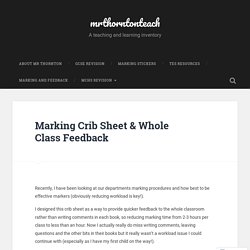 I designed this crib sheet as a way to provide quicker feedback to the whole classroom rather than writing comments in each book, so reducing marking time from 2-3 hours per class to less than an hour. Now I actually really do miss writing comments, leaving questions and the other bits in their books but it really wasn’t a workload issue I could continue with (especially as I have my first child on the way!). Therefore the crib sheet allows me to go through each students’ book and I make comments on the whole class sheet using the sections below. The benefits are that it gives me a snapshot of the whole class’s progress, allows me to ‘fine tune’ my lesson planning and it also gives activities and tasks for students to complete within DIRT the next lesson.

Whole-class feedback: improve the curriculum, not just the pupil. This is part of a series. 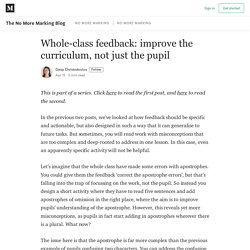 Click here to read the first post, and here to read the second. In the previous two posts, we’ve looked at how feedback should be specific and actionable, but also designed in such a way that it can generalise to future tasks. But sometimes, you will read work with misconceptions that are too complex and deep-rooted to address in one lesson. In this case, even an apparently specific activity will not be helpful. The tantalisation of standardisation: It’s Teenage Mutant Ninja Turtles all over again… and again… and again… Back in the early 90s, my older brother managed to get me a second-hand Nintendo Entertainment System (NES). 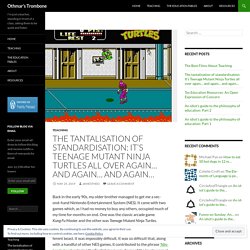 It came with two games which, as I had no money to buy any others, occupied much of my time for months on end. One was the classic arcade game Kung Fu Master and the other was Teenage Mutant Ninja Turtles. What do students think about marking? Over the past year or so, I’ve been doing some very informal research into students’ attitudes and opinions with some of the schools I work with on an ongoing basis. 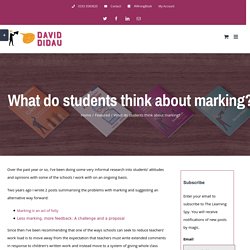 Two years ago I wrote 2 posts summarising the problems with marking and suggesting an alternative way forward: Since then I’ve been recommending that one of the ways schools can seek to reduce teachers’ work load is to move away from the expectation that teachers must write extended comments in response to children’s written work and instead move to a system of giving whole class feedback. The best counter-argument to this suggestion is when teachers ask, but what about motivation? Surely by writing extended comments we’re showing that we value the work they’ve done and if we don’t do this they’ll become demotivated and start to put in less effort. p1bjo7c692cll1lce17p8k2q1b38d.

Feedback and marking. Did Austin Actually Learn Anything from his Butterfly? – Adventures in Instruction. I think I first came across Berger’s “Austin’s Butterfly” in this blog post by Tom Sherrington. 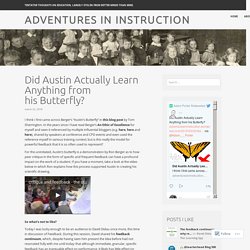 In the years since I have read Berger’s An Ethic of Excellence for myself and seen it referenced by multiple influential bloggers (e.g. here, here and here), shared by speakers at conference and CPD events and even used the reference myself in various training context; but is this really the model for powerful feedback that it is so often used to represent? For the uninitiated, Austin’s butterfly is a demonstration by Ron Berger as to how peer critique in the form of specific and frequent feedback can have a profound impact on the work of a student. If you have a moment, take a look at the video below in which Ron explains how this process supported Austin in creating his scientific drawing. Book Scrutiny Checklists Feel like Trying to Teach in a Straitjacket. I sit in the primary staffroom four weeks into the new academic year. 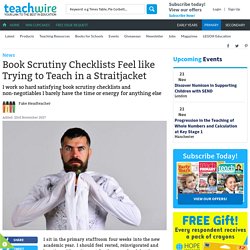 I should feel rested, reinvigorated and bursting with excitement for the year ahead, but I don’t.

Through lots of guidance, we are able to elicit some pretty good sentences from the class, before letting them loose to write their own. I call this a ‘Show Sentence’. I do these pretty much every lesson so they get plenty of writing practice. Below is a demonstration of this approach in action in a lesson. To provide a context, this would take place after they have read, discussed and annotated the text, and have memorised key quotations. 12 Ways to Embrace Marking and Feedback by @TeacherToolkit. There are a few days left before the end of term and this is one last marking and feedback blog before the summer holidays begin.

What feedback techniques could you use that make students think and take action? Marking has two purposes. One, students act on feedback and make progress over time. Two, it informs future planning and teaching. (Read more in our proposed Mark-Plan-Teach policy.) Live Feedback in Lessons. Does live-marking have a place in the classroom? If so, how can it be managed and what impact can it have? Teachers are bombarded with marking because it is central to their role, yet some teachers and schools yearn to mark every piece of work. Some parents also expect this, so it is clear that schools have a clear feedback policy communicated to students, parents and all colleagues so that marking is manageable and adds value. We know that feedback is one of the most effective ways to improve learning, but we should recognise that not everything can be – or should be – marked.

For the last month, I’ve been ‘live-marking’ in all of my lessons and although this has many advantages in the classroom, it is a technique hard-taught and hard-earned. Research: Published in April 2016, a research paper by the University of Oxford and Education Endowment Foundation, consisting of a panel of 1,382 practising teachers from 1,012 schools in the maintained sector in England completed the survey. Whole School Feedback Policy - The Confident Teacher. (Image based on the Education Endowment Foundation Toolkit findings) All the evidence tells us that great feedback works. Simple. A marked decline? The EEF’s review of the evidence on written marking. EEF marking review. I’ve rushed out this blog to try and take control of the narrative because in my view there are two damaging statements from the executive summary that are backed with no evidence and school leader may seize upon them.

Minishant - Involving learners in creating their own success criteria. Self and peer assessment - Dylan Wiliam. Why we’ve got planning and marking all wrong (part 2) Marking%20Policy%20-%20January%202015.pdf. Markingandfeedbackpolicy2014.pdf. Blueprint Teacher: 'So that' EBITs for peer assessed writing. I have recently taught my Year 4 English class again. Their class teacher had set them the task of redrafting a myth that they had written the previous day.

I have to say I had some apprehensions prior to teaching the lesson, as they had rewritten the myth of Persephone as a Mayan myth and I was going introduce a chef themed peer assessment tool (as their topic that term was chefs). Sustaining-TLCs-20140829.pdf. Getting on top of marking. Public-critique-sheet. Why ‘triple marking’ is wrong (and not my fault) What purpose marking? I want to be a #SmartAss by. How to improve marking in primary schools. Getting feedback right Part 3: How can we increase pupils’ effort. 10 Assessments You Can Perform In 90 Seconds. Marking: Boulder or Butterfly? 8.4 The Self Directed Feedback. Fast Feedback. Example-1.pdf. Getting feedback right Part 1 – Why do we give it. Getting feedback right Part 2: How do we provide clarity. Using Critique to develop an ethic of excellence. Anglican Schools Partnership Effective Feedback. The Best Assessment Apps for Teachers and Education.

Top 5 Ways to Explain - badly... Reflecting on teaching in 2013-14 (the routine) – what went well, what needs to be improved? SJ Education: VERBALLY MARKING. Adventures with gallery critique. Celebrating Excellence. Assessment and feedback with ipads. Marking is an act of love. Public Critique. 8. October 2013 #blogsync: Marking with Impact! Whenisitdueinsir. Session 117 – Feedback: how can we make marking make an impact? Marking Codes. Adventures with gallery critique. The start of the journey. The 5 Minute Marking Plan by @TeacherToolkit and @LeadingLearner #5MinPlan. My butterfly: the sentence escalator.