Whole Class Feedback: Reducing workload, amplifying impact and making long-term change in the learners. – HoD and Heart. For years, I was the teacher that wrote reams and reams of green pen when ‘marking’ students’ work. 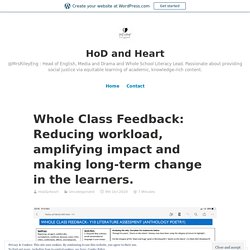 It would take me hours, weekends and evenings would be filled with the task, and books would often spend all weekend festering in my car until Sunday evening when I would reluctantly begin the same, monotonous routine of carrying the books into the house, reading student work and giving them a ‘Star and Arrow’ response to their work, along with a ‘Directed Improvement and Reflection Time’ task for them to respond to in purple pen.

Hours of my time, minutes of the students’, and for what? Students, via this method of ‘marking’, were not making progress. Sure, they would correct a few apostrophe errors as signposted by myself to do so, but they barely retained anything that I had toiled over the writing of. They read it, because they were directed to do so, but they didn’t really take it in. With all of our practice, we have to ask ourselves how it is impacting learning. Alas, I won. Now. Whole Class Feedback: A Winner All Round. Giving feedback the ‘Michaela’ way. Marking is a hornet. Written marking takes up huge amounts of teachers’ time. 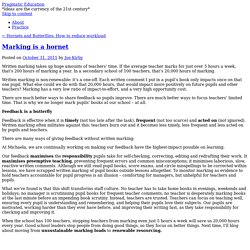 If the average teacher marks for just over 5 hours a week, that’s 200 hours of marking a year. In a secondary school of 100 teachers, that’s 20,000 hours of marking. Written marking is non-renewable: it’s a one-off. Each written comment I put in a pupil’s book only impacts once on that one pupil. What else could we do with that 20,000 hours, that would impact more positively on future pupils and other teachers? There are much better ways to share feedback so pupils improve. Feedback is a butterfly Feedback is effective when it is timely (not too late after the task), frequent (not too scarce) and acted on (not ignored). There are many ways of giving feedback without written marking: At Michaela, we are continually working on making our feedback have the highest-impact possible on learning: Our feedback maximises the responsibility pupils take for self-checking, correcting, editing and redrafting their work.

Whole Class Feedback: A Winner All Round. EEF-Flash-Marking-Implementation-Logic-Model. ‘Four Quarters Marking’ – A Workload Solution? In our new book ‘What Does This Look Like in the Classroom?’ 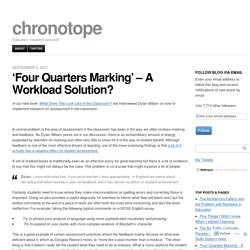 We interviewed Dylan Wiliam on how to implement research on assessment in the classroom. A central problem in the area of assessment in the classroom has been in the way we often confuse marking and feedback. As Dylan Wiliam points out in our discussion, there is an extraordinary amount of energy expended by teachers on marking and often very little to show for it in the way of student benefit. Although feedback is one of the most effective drivers of learning, one of the more surprising findings is that a lot of it actually has a negative effect on student achievement. A set of marked books is traditionally seen as an effective proxy for good teaching but there is a lot of evidence to say that this might not always be the case.

Dylan: I once estimated that, if you price teacher’s time appropriately, in England we spend about two and a half billion pounds a year on feedback and it has almost no effect on student achievement. 1. Stopping the Marking Runaway Train… For the last six months, like many schools, we have been reviewing our approaches to feedback and marking and this September we’ll be starting term with a revised approach. 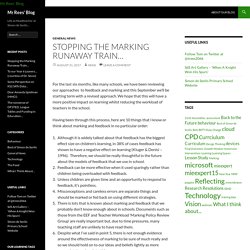 We hope that this will have a more positive impact on learning whilst reducing the workload of teachers in the school. Having been through this process, here are 10 things that I know or think about marking and feedback in no particular order: Reducing Teacher Workload By Re-Thinking Marking-The Michaela Files, Part 1. Last week i visited London’s faintly notorious Michaela School. 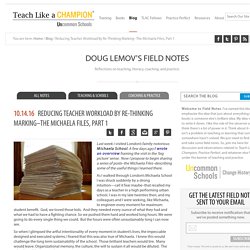 A few days ago I wrote an overview framing the visit in the ‘big picture’ sense. Now I propose to begin sharing a series of posts–the Michaela Files–describing some of the useful things I learned there. As I walked through London’s Michaela School I was struck suddenly by a strong intuition—call it fear maybe–that recalled my days as a teacher in a high performing urban school. I was in my late twenties then, and my colleagues and I were seeking, like Michaela, to engineer every moment for maximum student benefit.

God, we loved those kids. So when I glimpsed the artful intentionality of every moment in student’s lives, the impeccable designed and executed systems, I feared that this was also true of Michaela. But happily like many intuitions which we presume are accurate, mine appears to have been in large part unfounded. Ready for it? Teachers at Michaela do not mark student essays and other writing. How could they? Giving feedback the ‘Michaela’ way.