A Common Left Occipito-Temporal Dysfunction in Developmental Dyslexia and Acquired Letter-By-Letter Reading? Abstract Background We used fMRI to examine functional brain abnormalities of German-speaking dyslexics who suffer from slow effortful reading but not from a reading accuracy problem. 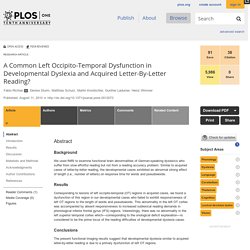 Activation of the Left Inferior Frontal Gyrus in the First 200 ms of Reading: Evidence from Magnetoencephalography (MEG) Abstract Background It is well established that the left inferior frontal gyrus plays a key role in the cerebral cortical network that supports reading and visual word recognition. 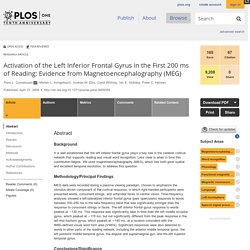 Less clear is when in time this contribution begins. A randomized controlled trial of a group-based gaze training intervention for children with Developmental Coordination Disorder. Abstract The aim of this study was to integrate a gaze training intervention (i.e., quiet eye training; QET) that has been shown to improve the throwing and catching skill of children with Developmental Coordination Disorder (DCD), within an approach (i.e., group therapy) that might alleviate the negative psychosocial impact of these motor skill deficits. 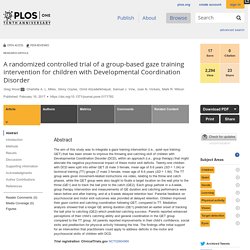 Twenty-one children with DCD were split into either QET (8 male 3 female, mean age of 8.6 years (SD = 1.04) or technical training (TT) groups (7 male 3 female, mean age of 8.6 years (SD = 1.84). The TT group were given movement-related instructions via video, relating to the throw and catch phases, while the QET group were also taught to fixate a target location on the wall prior to the throw (QE1) and to track the ball prior to the catch (QE2). Trial registration: ClinicalTrials.gov NCT02904980 Editor: Jacobus P. van Wouwe, TNO, NETHERLANDS Received: October 5, 2016; Accepted: January 23, 2017; Published: February 10, 2017 Introduction.

A Randomized Controlled Trial on The Beneficial Effects of Training Letter-Speech Sound Integration on Reading Fluency in Children with Dyslexia. Abstract A recent account of dyslexia assumes that a failure to develop automated letter-speech sound integration might be responsible for the observed lack of reading fluency. 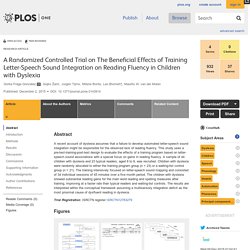 Are Autistic Traits in the General Population Stable across Development? Abstract There is accumulating evidence that autistic traits (AT) are on a continuum in the general population, with clinical autism representing the extreme end of a quantitative distribution. 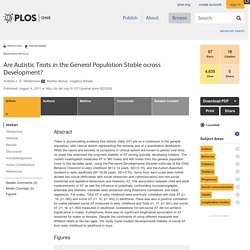 While the nature and severity of symptoms in clinical autism are known to persist over time, no study has examined the long-term stability of AT among typically developing toddlers. The current investigation measured AT in 360 males and 400 males from the general population close to two decades apart, using the Pervasive Developmental Disorder subscale of the Child Behavior Checklist in early childhood (M = 2.14 years; SD = 0.15), and the Autism-Spectrum Quotient in early adulthood (M = 19.50 years; SD = 0.70). Arithmetic Memory Is Modality Specific. Abstract In regards to numerical cognition and working memory, it is an open question as to whether numbers are stored into and retrieved from a central abstract representation or from separate notation-specific representations. 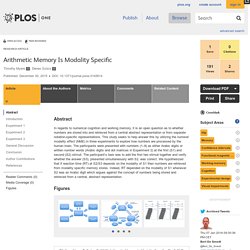 This study seeks to help answer this by utilizing the numeral modality effect (NME) in three experiments to explore how numbers are processed by the human brain. The participants were presented with numbers (1–9) as either Arabic digits or written number words (Arabic digits and dot matrices in Experiment 2) at the first (S1) and second (S2) stimuli. The participant’s task was to add the first two stimuli together and verify whether the answer (S3), presented simultaneously with S2, was correct.

We hypothesized that if reaction time (RT) at S2/S3 depends on the modality of S1 then numbers are retrieved from modality specific memory stores. Association between otitis media infection and failed hearing screenings in children. Abstract This study aims to assess prospectively whether there is an association between frequencies of upper respiratory tract infections (URTI) or asthma in early childhood and failed otoacoustic emission (OAE) screenings later in life. 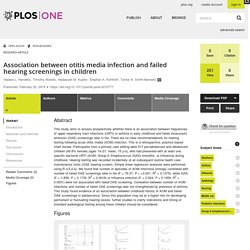 There are no clear recommendations for hearing testing following acute otitis media (AOM) infection. This is a retrospective, practice based chart review. Participants from a primary care setting were 517 pre-adolescent and adolescent children (49.9% female) (ages 10–21; mean, 15 y/o), who had presented with at least one specific bacterial URTI (AOM, Group A Streptococcus (GAS) tonsillitis, or Influenza) during childhood. Auditory and visual distractors disrupt multisensory temporal acuity in the crossmodal temporal order judgment task. Abstract The ability to synthesize information across multiple senses is known as multisensory integration and is essential to our understanding of the world around us. 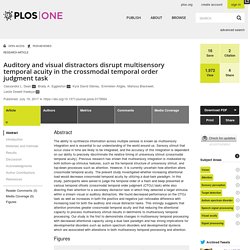 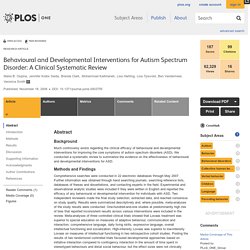 We conducted a systematic review to summarize the evidence on the effectiveness of behavioural and developmental interventions for ASD. Methods and Findings Comprehensive searches were conducted in 22 electronic databases through May 2007. Conclusions. Behavioral and Neural Correlates of Executive Functioning in Musicians and Non-Musicians. 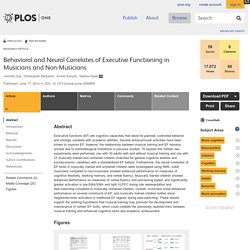 Several extracurricular activities have been shown to improve EF, however, the relationship between musical training and EF remains unclear due to methodological limitations in previous studies. To explore this further, two experiments were performed; one with 30 adults with and without musical training and one with 27 musically trained and untrained children (matched for general cognitive abilities and socioeconomic variables) with a standardized EF battery. Furthermore, the neural correlates of EF skills in musically trained and untrained children were investigated using fMRI. CATALISE: A Multinational and Multidisciplinary Delphi Consensus Study. Identifying Language Impairments in Children. Final version of consensus statements Even though there was a high level of agreement for Round 2 statements, we made some further modifications to the statements and to the background document to take into account the comments and additional sources of evidence provided by the panel.

Some items were re-ordered (see S4 Doc). The revised set of modified statements and background explanation was circulated to the panel for further comment, and the current paper represents the final agreed version. Children show right-lateralized effects of spoken word-form learning. Abstract It is commonly thought that phonological learning is different in young children compared to adults, possibly due to the speech processing system not yet having reached full native-language specialization. However, the neurocognitive mechanisms of phonological learning in children are poorly understood. We employed magnetoencephalography (MEG) to track cortical correlates of incidental learning of meaningless word forms over two days as 6–8-year-olds overtly repeated them. Native (Finnish) pseudowords were compared with words of foreign sound structure (Korean) to investigate whether the cortical learning effects would be more dependent on previous proficiency in the language rather than maturational factors.

Classification and adaptive behavior prediction of children with autism spectrum disorder based upon multivariate data analysis of markers of oxidative stress and DNA methylation. Abstract The number of diagnosed cases of Autism Spectrum Disorders (ASD) has increased dramatically over the last four decades; however, there is still considerable debate regarding the underlying pathophysiology of ASD.

This lack of biological knowledge restricts diagnoses to be made based on behavioral observations and psychometric tools. However, physiological measurements should support these behavioral diagnoses in the future in order to enable earlier and more accurate diagnoses. Clinical Characteristics of Children with Autism Spectrum Disorder and Co-Occurring Epilepsy. Abstract Objectives. Common Genetic Variants in FOXP2 Are Not Associated with Individual Differences in Language Development.

Abstract Much of our current knowledge regarding the association of FOXP2 with speech and language development comes from singleton and small family studies where a small number of rare variants have been identified. However, neither genome-wide nor gene-specific studies have provided evidence that common polymorphisms in the gene contribute to individual differences in language development in the general population.

One explanation for this inconsistency is that previous studies have been limited to relatively small samples of individuals with low language abilities, using low density gene coverage. The current study examined the association between common variants in FOXP2 and a quantitative measure of language ability in a population-based cohort of European decent (n = 812). No significant associations were found for a panel of 13 SNPs that covered the coding region of FOXP2 and extended into the promoter region. Editor: Dana C. Copyright: © 2016 Mueller et al. Introduction Results. Cortical Signatures of Dyslexia and Remediation: An Intrinsic Functional Connectivity Approach.

Decoupled Visually-Guided Reaching in Optic Ataxia: Differences in Motor Control between Canonical and Non-Canonical Orientations in Space. Abstract Guiding a limb often involves situations in which the spatial location of the target for gaze and limb movement are not congruent (i.e. have been decoupled). Such decoupled situations involve both the implementation of a cognitive rule (i.e. strategic control) and the online monitoring of the limb position relative to gaze and target (i.e. sensorimotor recalibration). Development of Multisensory Reweighting Is Impaired for Quiet Stance Control in Children with Developmental Coordination Disorder (DCD)

Direct Viewing of Dyslexics’ Compensatory Strategies in Speech in Noise Using Auditory Classification Images. Abstract A vast majority of dyslexic children exhibit a phonological deficit, particularly noticeable in phonemic identification or discrimination tasks. The gap in performance between dyslexic and normotypical listeners appears to decrease into adulthood, suggesting that some individuals with dyslexia develop compensatory strategies. Some dyslexic adults however remain impaired in more challenging listening situations such as in the presence of background noise. Disentangling the relationship between children’s motor ability, executive function and academic achievement. Distinct Effects of Memory Retrieval and Articulatory Preparation when Learning and Accessing New Word Forms. Dyslexia on a continuum: A complex network approach. Effectiveness of Treatment Approaches for Children and Adolescents with Reading Disabilities: A Meta-Analysis of Randomized Controlled Trials.

The Functional Connectome of Speech Control. The Role of the Caudal Superior Parietal Lobule in Updating Hand Location in Peripheral Vision: Further Evidence from Optic Ataxia. The Role of Corpus Callosum Development in Functional Connectivity and Cognitive Processing. Traits Contributing to the Autistic Spectrum. Words from spontaneous conversational speech can be recognized with human-like accuracy by an error-driven learning algorithm that discriminates between meanings straight from smart acoustic features, bypassing the phoneme as recognition unit.