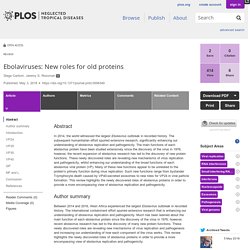 These newly discovered roles are revealing new mechanisms of virus replication and pathogenicity, whilst enhancing our understanding of the broad functions of each ebolavirus viral protein (VP). Many of these new functions appear to be unrelated to the protein’s primary function during virus replication. Author summary Between 2014 and 2016, West Africa experienced the largest Ebolavirus outbreak in recorded history. Citation: Cantoni D, Rossman JS (2018) Ebolaviruses: New roles for old proteins. Editor: Patricia V. Introduction. PLOS 06/04/16 Predicting and Evaluating the Epidemic Trend of Ebola Virus Disease in the 2014-2015 Outbreak and the Effects of Intervention Measures. Abstract We constructed dynamic Ebola virus disease (EVD) transmission models to predict epidemic trends and evaluate intervention measure efficacy following the 2014 EVD epidemic in West Africa. 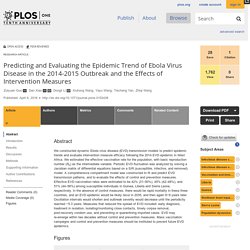 We estimated the effective vaccination rate for the population, with basic reproduction number (R0) as the intermediate variable. Periodic EVD fluctuation was analyzed by solving a Jacobian matrix of differential equations based on a SIR (susceptible, infective, and removed) model. A comprehensive compartment model was constructed to fit and predict EVD transmission patterns, and to evaluate the effects of control and prevention measures. 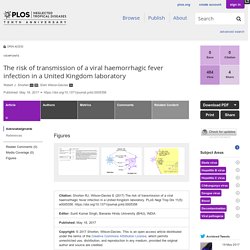 PLoS Negl Trop Dis 11(5): e0005358. Editor: Sunit Kumar Singh, Banaras Hindu University (BHU), INDIA Published: May 18, 2017 Copyright: © 2017 Shorten, Wilson-Davies. This is an open access article distributed under the terms of the Creative Commons Attribution License, which permits unrestricted use, distribution, and reproduction in any medium, provided the original author and source are credited. Funding: The authors received no specific funding for this work. Competing interests: The authors have declared that no competing interests exist. PLOS 02/02/17 Predicting Ebola Severity: A Clinical Prioritization Score for Ebola Virus Disease. Abstract Background Despite the notoriety of Ebola virus disease (EVD) as one of the world’s most deadly infections, EVD has a wide range of outcomes, where asymptomatic infection may be almost as common as fatality. 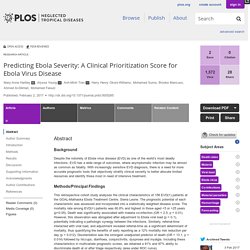 With increasingly sensitive EVD diagnosis, there is a need for more accurate prognostic tools that objectively stratify clinical severity to better allocate limited resources and identify those most in need of intensive treatment. Methods/Principal Findings This retrospective cohort study analyses the clinical characteristics of 158 EVD(+) patients at the GOAL-Mathaska Ebola Treatment Centre, Sierra Leone. PLOS 15/11/16 Minimally Symptomatic Infection in an Ebola ‘Hotspot’: A Cross-Sectional Serosurvey. 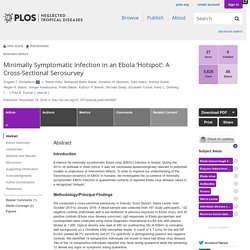 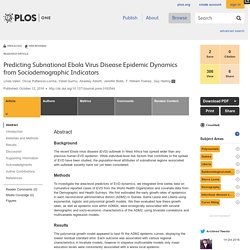 While individual-level risk factors that contribute to the spread of EVD have been studied, the population-level attributes of subnational regions associated with outbreak severity have not yet been considered. Methods. PLOS 23/08/16 Mortality, Morbidity and Health-Seeking Behaviour during the Ebola Epidemic 2014–2015 in Monrovia Results from a Mobile Phone Survey. Abstract Between March 2014 and July 2015 at least 10,500 Ebola cases including more than 4,800 deaths occurred in Liberia, the majority in Monrovia. 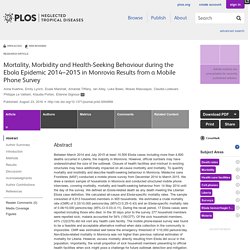 However, official numbers may have underestimated the size of the outbreak. Closure of health facilities and mistrust in existing structures may have additionally impacted on all-cause morbidity and mortality. To quantify mortality and morbidity and describe health-seeking behaviour in Monrovia, Médecins sans Frontières (MSF) conducted a mobile phone survey from December 2014 to March 2015. We drew a random sample of households in Monrovia and conducted structured mobile phone interviews, covering morbidity, mortality and health-seeking behaviour from 14 May 2014 until the day of the survey. Author Summary. PLOS 19/07/16 Heterogeneity in District-Level Transmission of Ebola Virus Disease during the 2013-2015 Epidemic in West Africa. Abstract The Ebola virus disease (EVD) epidemic in West Africa in 2013–2015 spread heterogeneously across the three hardest-hit countries Guinea, Liberia and Sierra Leone and the estimation of national transmission of EVD provides little information about local dynamics. 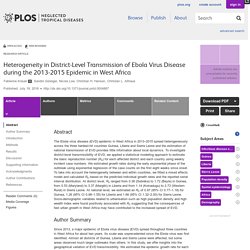 To investigate district-level transmissibility of EVD, we applied a statistical modelling approach to estimate the basic reproduction number (R0) for each affected district and each country using weekly incident case numbers. We estimated growth rates during the early exponential phase of the outbreak using exponential regression of the case counts on the first eight weeks since onset. To take into account the heterogeneity between and within countries, we fitted a mixed effects model and calculated R0 based on the predicted individual growth rates and the reported serial interval distribution. 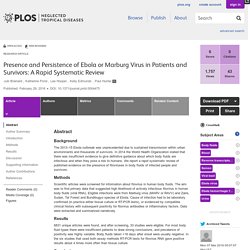 In 2014 the World Health Organization stated that there was insufficient evidence to give definitive guidance about which body fluids are infectious and when they pose a risk to humans. PLOS 15/06/15 Acceptability and Willingness-to-Pay for a Hypothetical Ebola Virus Vaccine in Nigeria. Abstract Background Ebola virus disease is a highly virulent and transmissible disease. 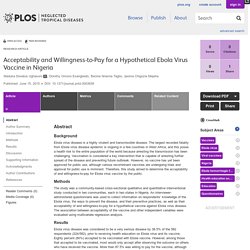 PLOS 11/06/15 Mass Media and the Contagion of Fear: The Case of Ebola in America. Abstract Background In the weeks following the first imported case of Ebola in the U. S. on September 29, 2014, coverage of the very limited outbreak dominated the news media, in a manner quite disproportionate to the actual threat to national public health; by the end of October, 2014, there were only four laboratory confirmed cases of Ebola in the entire nation. PLOS 03/11/14 Conservancy of mAb Epitopes in Ebolavirus Glycoproteins of Previous and 2014 Outbreaks.

Background: Several monoclonal antibodies (mAb) are being evaluated as treatment options for the current 2014 Ebola outbreak. But they were derived from and tested for protection against the older 1976 Mayinga or 1995 Kikwit Zaire Ebolaviruses (EBOV). The EBOV sequences reported for the current outbreak contain several mutations whose significance remained to be established. PLOS 09/07/14 Ebola Outbreak Response; Experience and Development of Screening Tools for Viral Haemorrhagic Fever (VHF) in a HIV Center of Excellence Near to VHF Epicentres. Abstract Introduction There have been 3 outbreaks of viral hemorrhagic fever (VHF) in Uganda in the last 2 years. VHF often starts with non-specific symptoms prior to the onset of haemorrhagic signs. HIV clinics in VHF outbreak countries such as Uganda see large numbers of patients with HIV 1/2 infection presenting with non-specific symptoms every day. Whilst there are good screening tools for general health care facilities expecting VHF suspects, we were unable to find tools for use in HIV or other non-acute clinics.

Methods We designed tools to help with communication to staff, infection control and screening of HIV patients with non-specific symptoms in a large HIV clinic during the outbreaks in Uganda. Results. PLOS 02/09/14 Assessing the International Spreading Risk Associated with the 2014 West African Ebola Outbreak. Background: The 2014 West African Ebola Outbreak is so far the largest and deadliest recorded in history. The affected countries, Sierra Leone, Guinea, Liberia, and Nigeria, have been struggling to contain and to mitigate the outbreak. The ongoing rise in confirmed and suspected cases, 2615 as of 20 August 2014, is considered to increase the risk of international dissemination, especially because the epidemic is now affecting cities with major commercial airports. Method: We use the Global Epidemic and Mobility Model to generate stochastic, individual based simulations of epidemic spread worldwide, yielding, among other measures, the incidence and seeding events at a daily resolution for 3,362 subpopulations in 220 countries.

The mobility model integrates daily airline passenger traffic worldwide and the disease model includes the community, hospital, and burial transmission dynamic. We use a multimodel inference approach calibrated on data from 6 July to the date of 9 August 2014. Data. PLOS - PLOS Resources on Ebola. Virginia Barbour, Medicine & Biology Editorial Director at PLOS, on the urgent need for Open Access research into the Ebola outbreak in West Africa. This post was updated on November 21st to include new research published in PLOS Pathogens and new commentary published in PLOS Currents Outbreaks.

This post was updated on September 19th, October 9th, 15th and 17th, and November 2nd, 3rd, 13th and 14th to include new content from PLOS Currents Outbreaks, PLOS Neglected Tropical Diseases and Speaking of Medicine. The current Ebola outbreak in West Africa probably began in Guinea in 2013, but it was only recognized properly in early 2014 and shows, at the time of writing, no sign of subsiding. The continuous human-to-human transmission of this new outbreak virus has become increasingly worrisome. There is an urgent need for research into all aspects of this Ebola outbreak. PLOS 23/05/12 Recovery Potential of a Western Lowland Gorilla Population following a Major Ebola Outbreak: Results from a Ten Ye.

Investigating the recovery capacity of wildlife populations following demographic crashes is of great interest to ecologists and conservationists. Opportunities to study these aspects are rare due to the difficulty of monitoring populations both before and after a demographic crash. PLOS 26/06/12 Ebola and Marburg Hemorrhagic Fevers: Neglected Tropical Diseases? Abstract Ebola hemorrhagic fever (EHF) and Marburg hemorrhagic fever (MHF) are rare viral diseases, endemic to central Africa. The overall burden of EHF and MHF is small in comparison to the more common protozoan, helminth, and bacterial diseases typically referred to as neglected tropical diseases (NTDs). However, EHF and MHF outbreaks typically occur in resource-limited settings, and many aspects of these outbreaks are a direct consequence of impoverished conditions.

PLOS 20/10/11 Discovery of an Ebolavirus-Like Filovirus in Europe. Abstract Filoviruses, amongst the most lethal of primate pathogens, have only been reported as natural infections in sub-Saharan Africa and the Philippines. PLOS 24/05/11 The Use of a Mobile Laboratory Unit in Support of Patient Management and Epidemiological Surveillance during the 2. PLOS 03/11/14 Conservancy of mAb Epitopes in Ebolavirus Glycoproteins of Previous and 2014 Outbreaks.