Auditory Processing Disorder International Research. Acute Stress Induces Hyperacusis in Women with High Levels of Emotional Exhaustion. Abstract Background Hearing problems is one of the top ten public health disorders in the general population and there is a well-established relationship between stress and hearing problems. 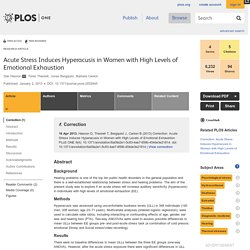 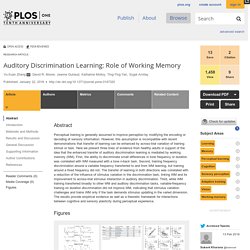 However, this assumption is incompatible with recent demonstrations that transfer of learning can be enhanced by across-trial variation of training stimuli or task. Here we present three lines of evidence from healthy adults in support of the idea that the enhanced transfer of auditory discrimination learning is mediated by working memory (WM). First, the ability to discriminate small differences in tone frequency or duration was correlated with WM measured with a tone n-back task. Second, training frequency discrimination around a variable frequency transferred to and from WM learning, but training around a fixed frequency did not. 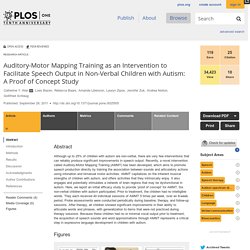 Recently, a novel intervention called Auditory-Motor Mapping Training (AMMT) has been developed, which aims to promote speech production directly by training the association between sounds and articulatory actions using intonation and bimanual motor activities. AMMT capitalizes on the inherent musical strengths of children with autism, and offers activities that they intrinsically enjoy. Auditory Processing in Noise: A Preschool Biomarker for Literacy. Abstract Learning to read is a fundamental developmental milestone, and achieving reading competency has lifelong consequences. 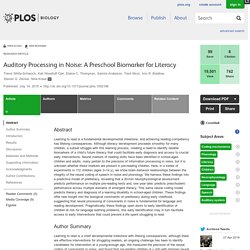 Although literacy development proceeds smoothly for many children, a subset struggle with this learning process, creating a need to identify reliable biomarkers of a child’s future literacy that could facilitate early diagnosis and access to crucial early interventions. Biological Markers of Auditory Gap Detection in Young, Middle-Aged, and Older Adults. Abstract The capability of processing rapid fluctuations in the temporal envelope of sound declines with age and this contributes to older adults' difficulties in understanding speech. 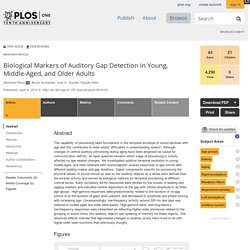 Although, changes in central auditory processing during aging have been proposed as cause for communication deficits, an open question remains which stage of processing is mostly affected by age related changes. We investigated auditory temporal resolution in young, middle-aged, and older listeners with neuromagnetic evoked responses to gap stimuli with different leading marker and gap durations. Signal components specific for processing the physical details of sound stimuli as well as the auditory objects as a whole were derived from the evoked activity and served as biological markers for temporal processing at different cortical levels. 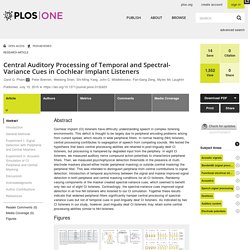 This deficit is thought to be largely due to peripheral encoding problems arising from current spread, which results in wide peripheral filters. Cochlear Delay and Medial Olivocochlear Functioning in Children with Suspected Auditory Processing Disorder. Abstract Behavioral manifestations of processing deficits associated with auditory processing disorder (APD) have been well documented. 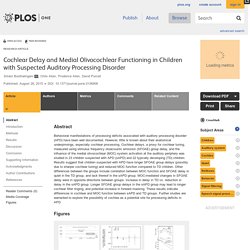 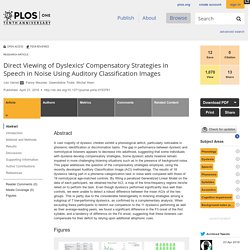 The gap in performance between dyslexic and normotypical listeners appears to decrease into adulthood, suggesting that some individuals with dyslexia develop compensatory strategies. Some dyslexic adults however remain impaired in more challenging listening situations such as in the presence of background noise. This paper addresses the question of the compensatory strategies employed, using the recently developed Auditory Classification Image (ACI) methodology. Early uneven ear input induces long-lasting differences in left–right motor function. 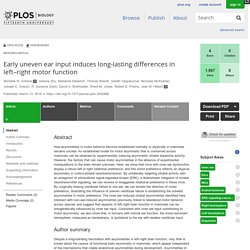 An established model for motor asymmetry that is conserved across mammals can be obtained by experimentally inducing asymmetric striatal dopamine activity. However, the factors that can cause motor asymmetries in the absence of experimental manipulations to the brain remain unknown. Here, we show that mice with inner ear dysfunction display a robust left or right rotational preference, and this motor preference reflects an atypical asymmetry in cortico-striatal neurotransmission. By unilaterally targeting striatal activity with an antagonist of extracellular signal-regulated kinase (ERK), a downstream integrator of striatal neurotransmitter signaling, we can reverse or exaggerate rotational preference in these mice. Author summary Academic Editor: Marco Prado, Robarts Research Institute, Canada Received: May 11, 2017; Accepted: February 6, 2018; Published: March 13, 2018. Effects of Presentation Rate and Attention on Auditory Discrimination: A Comparison of Long-Latency Auditory Evoked Potentials in School-Aged Children and Adults.

Abstract Decoding human speech requires both perception and integration of brief, successive auditory stimuli that enter the central nervous system as well as the allocation of attention to language-relevant signals. 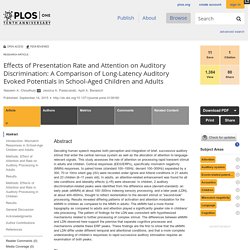 This study assesses the role of attention on processing rapid transient stimuli in adults and children. Cortical responses (EEG/ERPs), specifically mismatch negativity (MMN) responses, to paired tones (standard 100–100Hz; deviant 100–300Hz) separated by a 300, 70 or 10ms silent gap (ISI) were recorded under Ignore and Attend conditions in 21 adults and 23 children (6–11 years old). Evidence for the Late MMN as a Neurophysiological Endophenotype for Dyslexia.

Abstract Dyslexia affects 5–10% of school-aged children and is therefore one of the most common learning disorders. Research on auditory event related potentials (AERP), particularly the mismatch negativity (MMN) component, has revealed anomalies in individuals with dyslexia to speech stimuli. Furthermore, candidate genes for this disorder were found through molecular genetic studies. A current challenge for dyslexia research is to understand the interaction between molecular genetics and brain function, and to promote the identification of relevant endophenotypes for dyslexia. The present study examines MMN, a neurophysiological correlate of speech perception, and its potential as an endophenotype for dyslexia in three groups of children. Citation: Neuhoff N, Bruder J, Bartling J, Warnke A, Remschmidt H, Müller-Myhsok B, et al. (2012) Evidence for the Late MMN as a Neurophysiological Endophenotype for Dyslexia. Editor: Kevin Paterson, University of Leicester, United Kingdom Introduction.

Generalization of Auditory Sensory and Cognitive Learning in Typically Developing Children. Abstract Despite the well-established involvement of both sensory (“bottom-up”) and cognitive (“top-down”) processes in literacy, the extent to which auditory or cognitive (memory or attention) learning transfers to phonological and reading skills remains unclear.

Most research has demonstrated learning of the trained task or even learning transfer to a closely related task. However, few studies have reported “far-transfer” to a different domain, such as the improvement of phonological and reading skills following auditory or cognitive training. Hearing Loss and Cognition: The Role of Hearing Aids, Social Isolation and Depression. Interval Timing in Children: Effects of Auditory and Visual Pacing Stimuli and Relationships with Reading and Attention Variables. Abstract Motor timing tasks have been employed in studies of neurodevelopmental disorders such as developmental dyslexia and ADHD, where they provide an index of temporal processing ability. Investigations of these disorders have used different stimulus parameters within the motor timing tasks that are likely to affect performance measures.

Here we assessed the effect of auditory and visual pacing stimuli on synchronised motor timing performance and its relationship with cognitive and behavioural predictors that are commonly used in the diagnosis of these highly prevalent developmental disorders. Twenty-one children (mean age 9.6 years) completed a finger tapping task in two stimulus conditions, together with additional psychometric measures. As anticipated, synchronisation to the beat (ISI 329 ms) was less accurate in the visually paced condition.

Editor: Aditya Bhushan Pant, Indian Institute of Toxicology Reserach, India Copyright: © Birkett, Talcott. Introduction Methods. Involvement of Right STS in Audio-Visual Integration for Affective Speech Demonstrated Using MEG. Abstract Speech and emotion perception are dynamic processes in which it may be optimal to integrate synchronous signals emitted from different sources. Looking at the Ventriloquist: Visual Outcome of Eye Movements Calibrates Sound Localization. Abstract A general problem in learning is how the brain determines what lesson to learn (and what lessons not to learn). For example, sound localization is a behavior that is partially learned with the aid of vision.

This process requires correctly matching a visual location to that of a sound. This is an intrinsically circular problem when sound location is itself uncertain and the visual scene is rife with possible visual matches. Here, we develop a simple paradigm using visual guidance of sound localization to gain insight into how the brain confronts this type of circularity. Citation: Pages DS, Groh JM (2013) Looking at the Ventriloquist: Visual Outcome of Eye Movements Calibrates Sound Localization. Editor: David C. Received: March 6, 2013; Accepted: July 12, 2013; Published: August 29, 2013. Musical Experience and the Aging Auditory System: Implications for Cognitive Abilities and Hearing Speech in Noise.

Neural Adaptation and Behavioral Measures of Temporal Processing and Speech Perception in Cochlear Implant Recipients. Polarity-Dependent Transcranial Direct Current Stimulation Effects on Central Auditory Processing. Repeated Stimulus Exposure Alters the Way Sound Is Encoded in the Human Brain. Seeing Is Believing: Neural Representations of Visual Stimuli in Human Auditory Cortex Correlate with Illusory Auditory Perceptions. What accounts for individual differences in susceptibility to the McGurk effect? Abstract The McGurk effect is a classic audiovisual speech illusion in which discrepant auditory and visual syllables can lead to a fused percept (e.g., an auditory /bɑ/ paired with a visual /gɑ/ often leads to the perception of /dɑ/). The McGurk effect is robust and easily replicated in pooled group data, but there is tremendous variability in the extent to which individual participants are susceptible to it.

In some studies, the rate at which individuals report fusion responses ranges from 0% to 100%. Despite its widespread use in the audiovisual speech perception literature, the roots of the wide variability in McGurk susceptibility are largely unknown. This study evaluated whether several perceptual and cognitive traits are related to McGurk susceptibility through correlational analyses and mixed effects modeling.