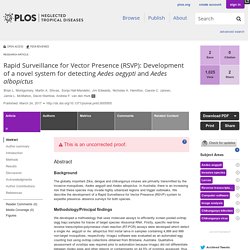 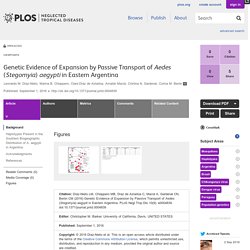 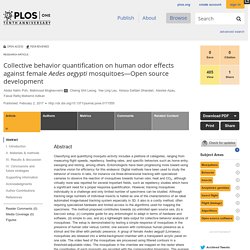 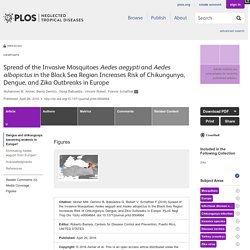 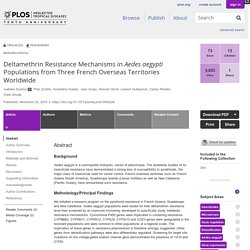 The worldwide studies of its insecticide resistance have demonstrated a strong loss of susceptibility to pyrethroids, the major class of insecticide used for vector control. French overseas territories such as French Guiana (South America), Guadeloupe islands (Lesser Antilles) as well as New Caledonia (Pacific Ocean), have encountered such resistance. Methodology/Principal Findings We initiated a research program on the pyrethroid resistance in French Guiana, Guadeloupe and New Caledonia. PLOS 23/07/15 Application of wMelPop Wolbachia Strain to Crash Local Populations of Aedes aegypti. 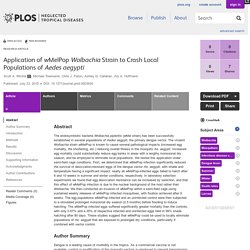 We tested this application under semi-field cage conditions. First, we determined that wMelPop infection significantly reduced the survival of desiccation-resistant eggs of the dengue vector Ae. aegypti, with shade and temperature having a significant impact; nearly all wMelPop-infected eggs failed to hatch after 6 and 10 weeks in summer and winter conditions, respectively. Author Summary Dengue is a leading cause of morbidity in the tropics. Editor: Jason L. PLOS 24/03/14 Differential Susceptibility of Two Field Aedes aegypti Populations to a Low Infectious Dose of Dengue Virus. Abstract Background The infectious dose required to infect mosquito vectors when they take a blood meal from a viremic person is a critical parameter underlying the probability of dengue virus (DENV) transmission. 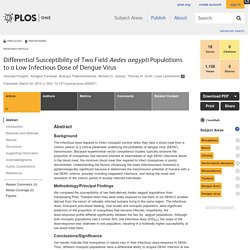 Because experimental vector competence studies typically examine the proportion of mosquitoes that become infected at intermediate or high DENV infectious doses in the blood meal, the minimum blood meal titer required to infect mosquitoes is poorly documented. Understanding the factors influencing the lower infectiousness threshold is epidemiologically significant because it determines the transmission potential of humans with a low DENV viremia, possibly including inapparent infections, and during the onset and resolution of the viremic period of acutely infected individuals. PLOS 11/12/14 The Effect of Virus-Blocking Wolbachia on Male Competitiveness of the Dengue Vector Mosquito, Aedes aegypti. Abstract Background The bacterial endosymbiont Wolbachia blocks the transmission of dengue virus by its vector mosquito Aedes aegypti, and is currently being evaluated for control of dengue outbreaks. 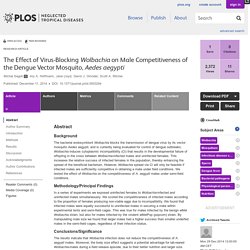 Wolbachia induces cytoplasmic incompatibility (CI) that results in the developmental failure of offspring in the cross between Wolbachia-infected males and uninfected females. This increases the relative success of infected females in the population, thereby enhancing the spread of the beneficial bacterium. However, Wolbachia spread via CI will only be feasible if infected males are sufficiently competitive in obtaining a mate under field conditions. 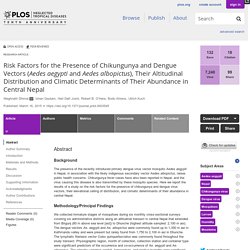 Chikungunya fever cases have also been reported in Nepal, and the virus causing this disease is also transmitted by these mosquito species. PLOS 01/08/13 Genetic Mapping of Specific Interactions between Aedes aegypti Mosquitoes and Dengue Viruses. Abstract Specific interactions between host genotypes and pathogen genotypes (G×G interactions) are commonly observed in invertebrate systems. 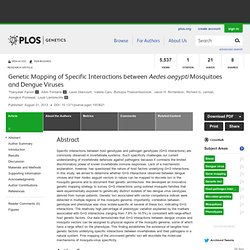 Such specificity challenges our current understanding of invertebrate defenses against pathogens because it contrasts the limited discriminatory power of known invertebrate immune responses. Lack of a mechanistic explanation, however, has questioned the nature of host factors underlying G×G interactions. In this study, we aimed to determine whether G×G interactions observed between dengue viruses and their Aedes aegypti vectors in nature can be mapped to discrete loci in the mosquito genome and to document their genetic architecture.

PLOS - NOV 2011 - Larval Development of Aedes aegypti and Aedes albopictus in Peri-Urban Brackish Water and Its - Implications f. PLOS 21/12/12 Assessing the Feasibility of Controlling Aedes aegypti with Transgenic Methods: A Model-Based Evaluation. Suppression of dengue and malaria through releases of genetically engineered mosquitoes might soon become feasible. Aedes aegypti mosquitoes carrying a conditionally lethal transgene have recently been used to suppress local vector populations in small-scale field releases. Prior to releases of transgenic insects on a wider scale, however, most regulatory authorities will require additional evidence that suppression will be effective in natural heterogeneous habitats. We use a spatially explicit stochastic model of an Ae. aegypti population in Iquitos, Peru, along with an uncertainty analysis of its predictions, to quantitatively assess the outcome of varied operational approaches for releases of transgenic strains with conditional death of females.

To assess the impact of DENV infection on salivary gland physiology and function, we performed a comparative genome-wide microarray analysis of the naïve and DENV infection-responsive A. aegypti salivary gland transcriptomes. DENV infection resulted in the regulation of 147 transcripts that represented a variety of functional classes, including several that are essential for virus transmission, such as immunity, blood-feeding, and host-seeking. RNAi-mediated gene silencing of three DENV infection-responsive genes - a cathepsin B, a putative cystatin, and a hypothetical ankyrin repeat-containing protein - significantly modulated DENV replication in the salivary gland.

Author Summary Figures. PLOS 16/03/15 Risk Factors for the Presence of Chikungunya and Dengue Vectors (Aedes aegypti and Aedes albopictus), Their Altitudinal Distribution and Climatic Determinants of Their Abundance in Central Nepal.