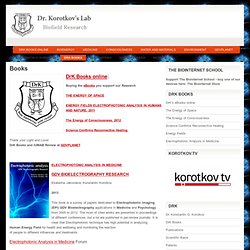 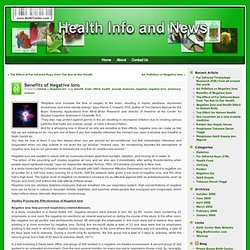 Howard, PhD, author of The Owners Manual for the Brain: Everyday Applications from Mind Brain Research and director of research at the Center for Applied Cognitive Sciences in Charlotte, N.C. “They also may protect against germs in the air, resulting in decreased irritation due to inhaling various particles that make you sneeze, cough, or have a throat irritation. And for a whopping one in three of us who are sensitive to their effects, negative ions can make us feel like we are walking on air.

You are one of them if you feel instantly refreshed the moment you open a window and breathe in fresh, humid air. You may be one of them if you feel sleepy when you are around an air-conditioner, but feel immediately refreshed and invigorated when you step outside or roll down the car window,” Howard says. Negative ions for a positive attitude. Learn how negative ions were discovered and how negative ions from the Biomat effect your health. Ionic Minerals Help Balance pH. Ki Flow Ion Therapy Necklaces and Bracelets ~ Tourmaline, Zeolite, Negative Ions, Healing.

In order to ensure our health and well being, it is crucial that we surround ourselves with a sufficient amount of negative ions. 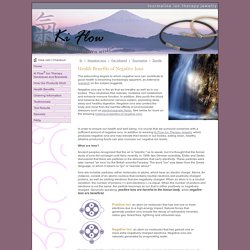 In addition to wearing Ki Flow Ion Therapy Jewelry, which produces negative ions and may elevate their levels in our bodies, eating clean, healthy, alkaline-producing foods can also increase our negative ion levels. What are Ions? Ancient peoples recognized that the air is "electric," so to speak, but it is thought that the formal study of ions did not begin until fairly recently. In 1899, two German scientists, Elster and Geitel, discovered that there are particles in the atmosphere that carry electricity. These particles were later named "air ions" by the British scientist Faraday.

Ions are invisible particles, either molecules or atoms, which bear an electric charge. Electrons are highly sensitive to shock, impact, electric current and atmospheric change. Please show me what the Leonard effect is by using some illustrations. Tourmaline Hand Energy shower head with negative ions - CHC-0432 - CAMAZ (China Manufacturer) - Shower Head & Shower Set - Construction & 2012 New design Energy shower head : Features: The discomfort of the body is caused by too many positive electrons in the physiological current of the human body which result in the disorder of the physiological current .The germanium can release negative electrons to neutralize the positive electrons once the temperature is above 32. 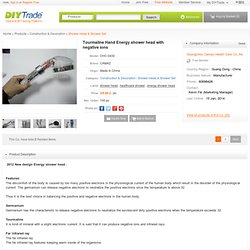 Thus it is the best choice in balancing the positive and negative electrons in the human body. Germanium Germanium has the characteristic to release negative electrons to neutralize the excrescent dirty positive electrons when the temperature exceeds 32. Tourmaline It is kind of mineral with a slight electronic current. Far infrared ray. Negative Ions Generator Reviews Test Produc. What Water Ionizer Companies Won't Tell You. DIY Alkaline Water Under 60 Sec. How negative ion and ozone generators clean the air.

How Negative Ions and Ozone Clean the Air "Electronically emitting nature's most powerful air-cleansing agents over a large area. 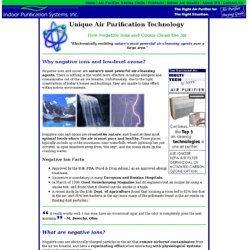 " Why negative ions and low-level ozone? Negative ions and ozone are nature's most powerful air-cleansing agents . There is nothing in the world more effective in taking allergens and contaminates out of the air we breathe. Unfortunately, due to the tight construction of today's homes and buildings, they are unable to take effect within indoor environments. Negative ions and ozone are created by nature , and found at their most optimal levels where the air is most pure and healthy . Negative Ion Facts Approved by the U.S. It really works well. . - M. Natural negative-ions. Bioions. How to Absorb Negative Ions.