The Triple Overload Problem—And What to Do About It. “Where did the time go?” 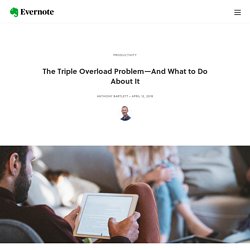 “Will you look at the time!?” “Time flies when you’re having fun.” If you have the alarming feeling that time is actually speeding up, that somehow your days are getting shorter while the list of things you need to do is getting longer, then you’re not alone. But although time itself isn’t really speeding up, you’re not imagining things, either. We are, in fact, being bombarded with more data, more communication, and more interruption than ever before, creating ever more demands on our limited time and attention. If it’s not one thing, it’s three You probably already know the feeling: There’s 150 emails you haven’t answered. Dr. As the name suggests, Triple Overload is a multifaceted problem—three separate yet interconnected issues that plague almost every company. Data Overload—the exponential growth of knowledge By 1950, human knowledge was doubling every 25 years.

This growth of knowledge is something to celebrate. While once upon a time, in the days B.C. 1. 2. The Horse is Technology, But the Rider is on Auto-Pilot. You wake up the morning and before saying hi to anyone in the house you say hi to your phone. 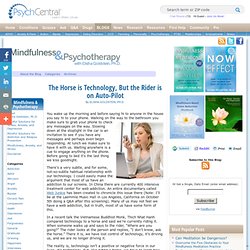 Walking on the way to the bathroom you make sure to grab your phone to check any messages on the way. Slowing down at the stoplight in the car is an invitation to see if you have any messages and perhaps even begin responding. At lunch we make sure to have it with us. Waiting anywhere is a cue to engage anything on the phone. Why the modern world is bad for your brain. Our brains are busier than ever before. 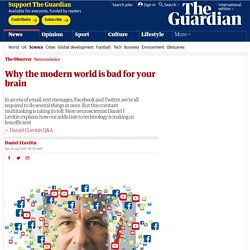 We’re assaulted with facts, pseudo facts, jibber-jabber, and rumour, all posing as information. Trying to figure out what you need to know and what you can ignore is exhausting. At the same time, we are all doing more. Thirty years ago, travel agents made our airline and rail reservations, salespeople helped us find what we were looking for in shops, and professional typists or secretaries helped busy people with their correspondence. Now we do most of those things ourselves. Our smartphones have become Swiss army knife–like appliances that include a dictionary, calculator, web browser, email, Game Boy, appointment calendar, voice recorder, guitar tuner, weather forecaster, GPS, texter, tweeter, Facebook updater, and flashlight. Digital Stress. Multitasking. Fear Of Missing Out. Low-Quality News. Misinformation. What Leonard Cohen Teaches Us about Presence and the Art of Stillness.

By Maria Popova “Going nowhere … isn’t about turning your back on the world; it’s about stepping away now and then so that you can see the world more clearly and love it more deeply.” 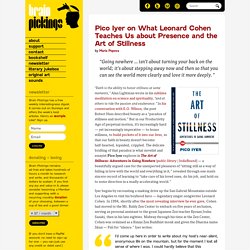 “Faith is the ability to honor stillness at some moments,” Alan Lightman wrote in his sublime meditation on science and spirituality, “and at others to ride the passion and exuberance.” In his conversation with E.O. Wilson, the poet Robert Hass described beauty as a “paradox of stillness and motion.”

But in our Productivity Age of perpetual motion, it’s increasingly hard — yet increasingly imperative — to honor stillness, to build pockets of it into our lives, so that our faith in beauty doesn’t become half-hearted, lopsided, crippled. Iyer begins by recounting a snaking drive up the San Gabriel Mountains outside Los Angeles to visit his boyhood hero — legendary singer-songwriter Leonard Cohen.

Leonard Cohen had come to this Old World redoubt to make a life — an art — out of stillness. Donating = Loving. Staying Present and Grounded in the Age of Information Overload. How do we answer the grand question of how to live—and more importantly—how to live well? 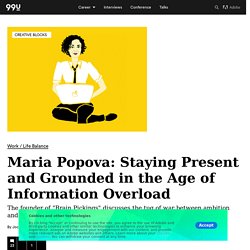 This is the deeply philosophical (and yet eminently pragmatic) inquiry that lies at the core of Maria Popova’s remarkable blog, Brain Pickings. Since she launched Brain Pickings as a passion project back in 2006, it’s grown impressively, becoming an intellectual touchstone for inquiring minds that now draws several million readers a month. In the age of information overload, Popova is the ultimate hunter-gatherer-curator, bringing her intensely curious mind to bear on everything from Susan Sontag’s journals to Maurice Sendak’s vintage illustrations to Albert Einstein’s letters. Overwhelmed.