We Believe Exploring Purpose Beats "Creating Urgency for Change" Every-time. Creating the right kind of urgency to bring about change. Illustration by Peter Stark When disruption strikes a business, it is natural for its leaders to try to defend it by focusing on core business activities and improving current products and practices, even while creating a sense of urgency to bring about change. 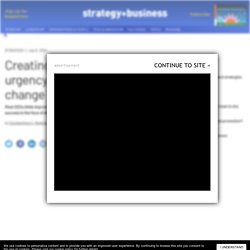 In a survey of 486 global CEOs PwC undertook in 2019, a significant majority said this was a good response to disruptive new entrants. On the face of it, this reaction appears to be a no-brainer. And there are numerous examples of companies whose defense succeeded. Take Sky, a European media and entertainment company that responded to disruption by digitizing its existing processes and at the same time developing new digital products for its customers — all of which aimed to improve Sky’s core business. But other companies failed by taking this approach. The answer sounds simple: A company needs to assess whether the core business is worth saving or improving before deciding whether it should use new technologies to improve it.

LinkedIn by The Change Leadership. Psychopaths in corporate leadership: It's time to take it seriously. Our mission to make business better is fueled by readers like you. 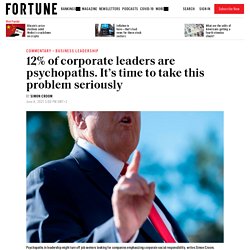 To enjoy unlimited access to our journalism, subscribe today. Over the past year, there’s been a spike of interest in the intersections between leadership and psychopathy, partly fueled perhaps by the former presidency of Donald Trump. While Trump’s behavior fueled much public outrage, psychopathy in the workplace, or corporate psychopathy, arguably has a more direct impact on our lives. Corporate psychopathy, particularly in high-level leaders, causes much suffering and is therefore an ethical issue. But there’s another issue as well: It potentially costs businesses billions of dollars every year.

My colleagues and I found in our research that 12% of corporate senior leadership displays a range of psychopathic traits, which means psychopathy is up to 12 times more common among senior management than among the general population. Change: Why Purpose Trumps Urgency. The importance of communicating the meaning of changes in organizations is obvious. 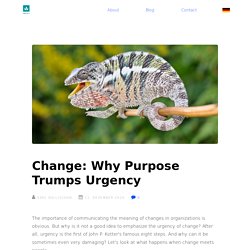 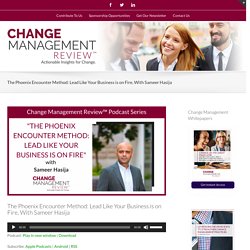 Sameer’s teaching focusses on using a process lens to understand new levers of innovation. Using a systematic analysis of processes within and across firm boundaries, he emphasizes the role of process-based innovation in creating new business models and/or fresh competitive positioning for existing business models. Sameer conducts workshops for executives on understanding the latest developments in technology and their role in radically disrupting and/or transforming businesses. Questions for Podcast What is the Phoenix Encounter Method, and how did it come about? Renverser le culte de l’urgence : une nécessité pour assurer la croissance. 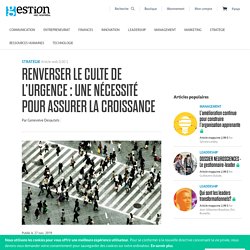 Why Burning Platforms Don't Work. Fear can be a motivator – but does fear motivate the right kind of actions and behavior? 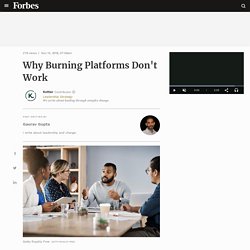 Research has shown that fear leads people to be more conservative - taking fewer risks and preserving the status quo. Activating fear in people makes them less likely to want to change the current situation. Gregory Berns, Director at the Center of Neuropolicy at Emory University, says “The most concrete thing that neuroscience tells us is that when the fear system of the brain is active, exploratory activity and risk-taking are turned off.” As a result, a lot of energy gets directed at justifying the status quo and pushing back against the need for real change. The evolutionary purpose of negative emotions such as fear and anger is to narrow focus on immediate problem solving and to allow short periods of intense activity fueled by adrenaline.