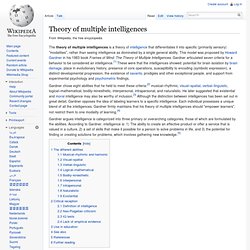 Top Apps of the month. Multiple Intelligence. Theory of multiple intelligences. Theory of multiple intelligences. Multiple Intelligence. ColorQuiz.com - The free five minute personality test! 100 Best RSS Feeds to Follow Science News. If you are a busy college student who wants a way to keep up with all the latest science news, but also need to find a balance with all your school work and other commitments, or have an interest in science careers, then following RSS feeds is a great way to customize and streamline the process. 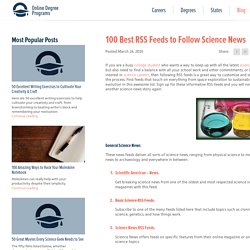 Find feeds that touch on everything from space exploration to sustainability to evolution in this awesome list. Sign up for these informative RSS feeds and you will never miss another science news story again. General Science News These news feeds deliver all sorts of science news, ranging from physical science to medical news to archaeology and everywhere in between. Scientific American – News. Physical Sciences Keep up with news from the physical sciences, including chemistry, physics, and Earth sciences. New Scientist – Physics & Math. Biological Sciences From biotechnology to genetics to anthropology, these feeds all bring news from the biological sciences. THOUGHT. Speed reading. History[edit] Psychologists and educational specialists working on visual acuity used a tachistoscope to conclude[1] that, with training, an average person could identify minute images flashed on the screen for only one five-hundredth of a second (2 ms). 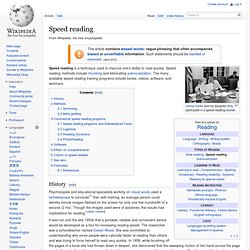 Though the images used were of airplanes, the results had implications for reading. [citation needed] Methods[edit] Skimming[edit] Self-Help. Self-Help. The Write Practice — Practical Inspiration. The free encyclopedia. Find the Meanings and Definitions of Words at Dictionary. : Quick and Dirty Tips ™ Mignon Fogarty is the creator of Grammar Girl and the founder and managing director of Quick and Dirty Tips. 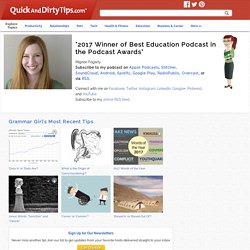 A magazine writer, technical writer, and entrepreneur, she has served as a senior editor and producer at a number of health and science web sites. She has a B.A. in English from the University of Washington in Seattle and an M.S. in biology from Stanford University. Mignon believes that learning is fun, and the vast rules of grammar are wonderful fodder for lifelong study. She strives to be a friendly guide in the writing world. Her archenemy is the evil Grammar Maven, who inspires terror in the untrained and is neither friendly nor helpful. Grammar Girl provides short, friendly tips to improve your writing.

To book a lecture event with Mignon Fogarty for your company or organization, contact Macmillan Speakers. Practical Inspiration. Psychology Tests & Surveys. Speed reading. Psychology. Psychology is an academic and applied discipline that involves the scientific study of mental functions and behaviors.[1][2] Psychology has the immediate goal of understanding individuals and groups by both establishing general principles and researching specific cases,[3][4] and by many accounts it ultimately aims to benefit society.[5][6] In this field, a professional practitioner or researcher is called a psychologist and can be classified as a social, behavioral, or cognitive scientist. 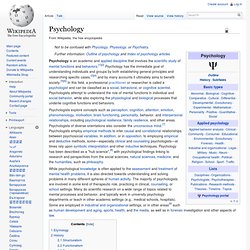 Psychologists attempt to understand the role of mental functions in individual and social behavior, while also exploring the physiological and biological processes that underlie cognitive functions and behaviors. While psychological knowledge is often applied to the assessment and treatment of mental health problems, it is also directed towards understanding and solving problems in many different spheres of human activity. Etymology History Structuralism Functionalism Psychoanalysis Behaviorism Humanistic. Philosophy. Philosophy is the study of general and fundamental problems, such as those connected with reality, existence, knowledge, values, reason, mind, and language.[1][2] Philosophy is distinguished from other ways of addressing such problems by its critical, generally systematic approach and its reliance on rational argument.[3] In more casual speech, by extension, "philosophy" can refer to "the most basic beliefs, concepts, and attitudes of an individual or group".[4] The word "philosophy" comes from the Ancient Greek φιλοσοφία (philosophia), which literally means "love of wisdom".[5][6][7] The introduction of the terms "philosopher" and "philosophy" has been ascribed to the Greek thinker Pythagoras.[8] Areas of inquiry Philosophy is divided into many sub-fields. 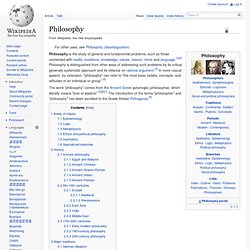 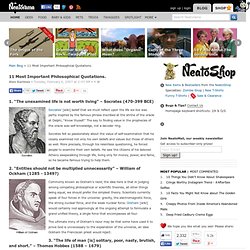 “The unexamined life is not worth living” – Socrates (470-399 BCE) Socrates’ [wiki] belief that we must reflect upon the life we live was partly inspired by the famous phrase inscribed at the shrine of the oracle at Delphi, “Know thyself.” The key to finding value in the prophecies of the oracle was self-knowledge, not a decoder ring. Socrates felt so passionately about the value of self-examination that he closely examined not only his own beliefs and values but those of others as well. More precisely, through his relentless questioning, he forced people to examine their own beliefs. 2. Commonly known as Ockham’s razor, the idea here is that in judging among competing philosophical or scientific theories, all other things being equal, we should prefer the simplest theory. The ultimate irony of Ockham’s razor may be that some have used it to prove God is unnecessary to the explanation of the universe, an idea Ockham the Franciscan priest would reject. 3. 4.