Americans agree about more issues than they realize. Many Americans assume the rest of the country doesn't share their political and policy priorities — but they're often wrong, according to new polling by Populace, first seen by Axios. 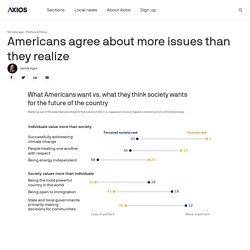 Why it matters: The polling reveals that despite growing political polarization, Americans share similar long-term goals and priorities for the country. Driving the news: Addressing climate change and preserving clean air and water landed in respondents' top 5 personal priorities for the future of the U.S. — but they believe those issues rank closer to the bottom for "most others. " How To Read Your Future With The Markings On Your Palm. How to stop being busy and reclaim your happiness. Dan Pontefract Dan Pontefract is Chief Envisioner at TELUS, where he heads the Transformation Office, a future-of-work consulting group that helps organizations enhance their corporate cultures and collaboration practices. 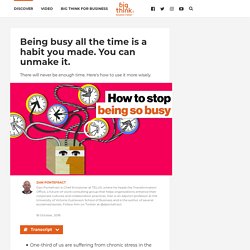 Dan is an adjunct professor at the University of Victoria Gustavson School of Business and is the author of several acclaimed books. Follow him on Twitter at @dpontefract. Schadenfreude Motives. In many cases, envy plays a prominent role in the feeling of schadenfreude. 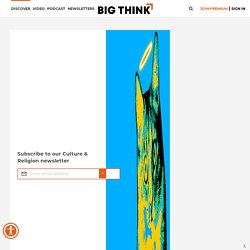 Competition and rivalry exemplify taking pleasure in another's misery. A strong sense of moral justice pervades many aspects of schadenfreude. Everybody has felt schadenfreude to some certain degree.

Stop Calling Them Soft Skills; They're Essential Skills — Trevor Muir. We need to call them what they really are: essential skills. 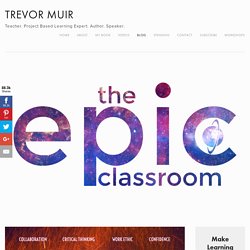 They are skills that are absolutely necessary to thrive in the modern world. I mean, how is the ability to collaborate not the most emphasized standard in the Common Core? The Purposeful Life Is Healthy and Wise. Source: Mladen Zivkovic/Shutterstock The idea that being healthy, wealthy, and wise is the key to happiness has a long tradition and was, in fact, the title of a British television show that ran in the mid-90s, based on part of the quote that begins: "Early to bed and early to rise. 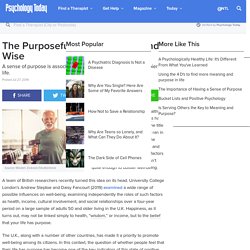 " Any of these key factors alone, so the reasoning went, isn’t quite enough to bolster well-being. article continues after advertisement A team of British researchers recently turned this idea on its head. University College London’s Andrew Steptoe and Daisy Fancourt (2019) examined a wide range of possible influences on well-being, examining independently the roles of such factors as health, income, cultural involvement, and social relationships over a four-year period on a large sample of adults 50 and older living in the U.K. The U.K., along with a number of other countries, has made it a priority to promote well-being among its citizens. "Everything happens for a reason"

The lies our culture tells us about what matters. You Know Less Than You Think. Source: 139904 / Pixabay Many of us care deeply about our political beliefs, and we’re often very confident about the beliefs that we hold. 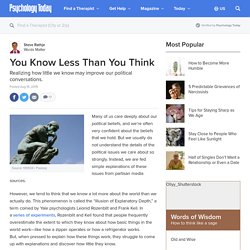 But we usually do not understand the details of the political issues we care about so strongly. Instead, we are fed simple explanations of these issues from partisan media sources. This is your brain on improv. Blunted moral reactions from a brief mindfulness meditation exercise. Mindfulness meditation appears to have beneficial effects on various aspects of life. 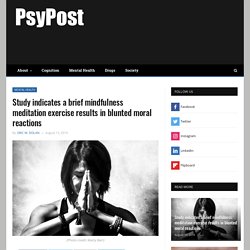 But new research suggests that mindfulness doesn’t automatically enhance only the good side of people. The study, published in the European Journal of Social Psychology, provides preliminary evidence that brief mindfulness exercises can blunt moral reactions to harm. “The reputation of mindfulness on moral behavior is immaculate. Jonathan Haidt Explains How Social Media Drives Polarization. The Truth About The Left Brain / Right Brain Relationship. The Single Word That Stops Negative Self-Talk.

Like it or not, everyone has to confront negative self-talk. 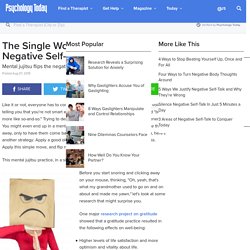 It might be that inner voice telling you that you're not smart enough, successful enough, or that you should "be more like so-and-so. " Trying to deny or run away from negativity takes a lot of energy. You might even end up in a mental war with those thoughts, trying to rationalize them away, only to have them come back even stronger.

If this has happened to you, here's another strategy: Apply a good old-fashioned jujitsu move using your awareness. Apply this simple move, and flip negativity on its head. article continues after advertisement This mental jujitsu practice, in a single word, is gratitude. Do You Need to be Proactive in Life?—The Work of Byron Katie® How Traumas Create Negative Patterns in Relationships. Source: tiburi/Pixabay Traumas are extreme life events that threaten your physical or psychological survival. 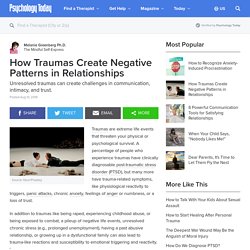 A percentage of people who experience traumas have clinically diagnosable post-traumatic stress disorder (PTSD), but many more have trauma-related symptoms, like physiological reactivity to triggers, panic attacks, chronic anxiety, feelings of anger or numbness, or a loss of trust. article continues after advertisement In addition to traumas like being raped, experiencing childhood abuse, or being exposed to combat, a pileup of negative life events, unresolved chronic stress (e.g., prolonged unemployment), having a past abusive relationship, or growing up in a dysfunctional family can also lead to trauma-like reactions and susceptibility to emotional triggering and reactivity.

The Personality Trait Linked To A Healthy Brain. People with this trait tend to have larger brain volumes in critical areas, a study finds. 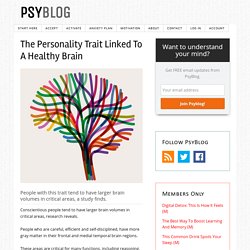 Dialogue. Brain Scans Confirm There's a Part of You That Remains 'You' Throughout Your Life.