House Construction too Slow for Millennials. There is widespread industry concern that new homes and apartment buildings are not being constructed fast enough to keep up with demand and now the National Association of Home Builders (NAHB) says there is a mismatch between where they are being built and where they are truly needed. 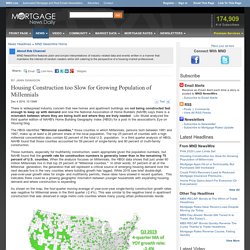 Litic Mulali analyzed the third quarter edition of NAHB's Home Building Geography Index (HBGI) for a post in the association's Eye on Housing blog. The HBGI identified "Millennial counties," those counties in which Millennials, persons born between 1981 and 1997, make up at least a 26 percent share of the local population. The top 25 percent of counties with a high millennial concentration also contain 62 percent of the total U.S. population. In a third quarter analysis of HBGI, NAHB found that those counties accounted for 59 percent of single-family and 80 percent of multi-family construction. Generational war? Millennials, boomers choose similar brands. Village Movement California Fall 2019 Webinars.

These two webinars will convey content to boost your ability to communicate village impact on members, volunteers, and communities. 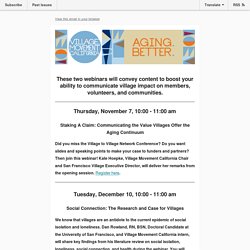 Thursday, November 7, 10:00 - 11:00 am Staking A Claim: Communicating the Value Villages Offer the Aging Continuum Did you miss the Village to Village Network Conference? University Student Climate Change Summit. Desperate Ways to Attract Uninterested Millennial Sports Fans. When it comes to spending money, millennials are known for valuing experiences over physical goods, but they’re not as interested in buying tickets to sports games. 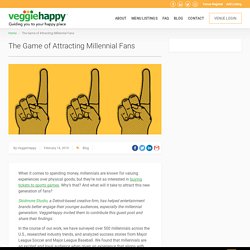 Why’s that? And what will it take to attract this new generation of fans? Skidmore Studio, a Detroit-based creative firm, has helped entertainment brands better engage their younger audiences, especially the millennial generation. 'What Do You Believe Now?' Film follows up with millennials 17 years later. (RNS) — In 2002, filmmaker Sarah Feinbloom interviewed six millennial teenagers about their faith traditions for a documentary titled “What Do You Believe?” 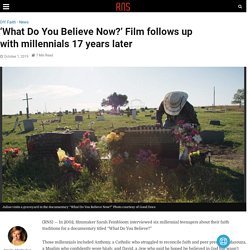 Those millennials included Anthony, a Catholic who struggled to reconcile faith and peer pressure; Mazouza, a Muslim who confidently wore hijab; and David, a Jew who said he hoped he believed in God but wasn’t sure after he learned about the Holocaust and slavery and saw loved ones struggle. They also included Carina, who felt the culture’s emphasis on excess conflicted with her Buddhist values; Morgan, a pagan who believed “the earth is a magical place”; and Julius, who practiced his traditional Lakota beliefs and trusted that “God is everywhere.”

Filmmaker Sarah Feinbloom. Courtesy photo Seventeen years later, Feinbloom is back with “What Do You Believe Now?” Beware the Millennials blocking the use of trading technology. Turns out it's not just old-school traders who have their doubts about the use of technology on the trading floor. 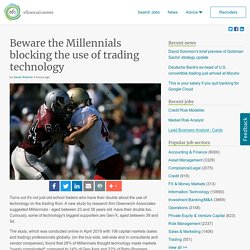 It’s not just millennials, spending pattern is seeing an overall shift. Gen Zers vs. Millennials: How and Why Brands Must Know the Difference. Marketers too often bundle millennials and Gen Zers into one indistinguishable group, but, without market segmentation, retailers won’t be able to determine the precise needs and characteristics of these different consumer groups. 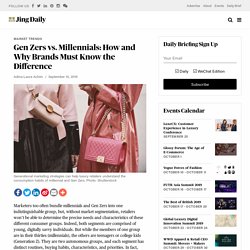 Indeed, both segments are comprised of young, digitally savvy individuals. But while the members of one group are in their thirties (millennials), the others are teenagers or college kids (Generation Z). They are two autonomous groups, and each segment has distinct routines, buying habits, characteristics, and priorities. In fact, marketers will even discover significant distinctions within each generation, making the dissimilarities between millennials and Generation Z that much more important. It makes sense that a 20-year-old would understand luxury differently than someone in their late thirties. 3 Key Markers Of Generation Z - Awana YM. This past week Barna, in a partnership with Impact 360, launched a critical study about the trends of the newest generation of students we are ministering to: Generation Z. 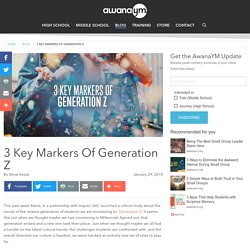 It seems like just when we thought maybe we had ministering to Millennials figured out, that generation ended and a new one took their place. Just when we thought maybe we all had a handle on the latest cultural trends, the challenges students are confronted with, and the overall direction our culture is headed; we were handed an entirely new set of rules to play by. This study should be considered the new rulebook. No, it is not the definitive research project. Game of Life Different For Millennials & Gen-Zers. This post is brought to you by M&T Bank. 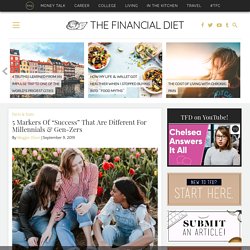 We’re partnering with M&T Bank to bring you a series of smart savings tips from real women who’ve made their money work for them — and weren’t always so savvy. We’ve always focused on bringing you personalized money success stories (and learning experiences!) Because, at the end of the day, there is simply no one piece of generalized money advice that’s going to apply to absolutely everyone. Manipulating Millennials with swanky new ads. The millennials – it is the TG that every marketer is running after and the one segment they believe will be the growth driver in years to come. 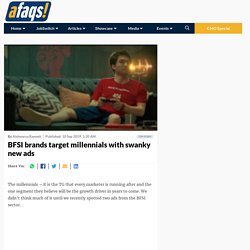 We didn’t think much of it until we recently spotted two ads from the BFSI sector. What struck us is the way hardcore banking offerings like home loans and retirement savings now don a swanky, stylish new avatar. Everyone wants to chase the girl/guy on the go, the one who is hell bent on following their passion – the millennial.

12 Industries That Will Thrive Thanks To Millennials - CB Insights Research. Millennials are one of the largest generations in history, and they're on the cusp of their prime spending years. 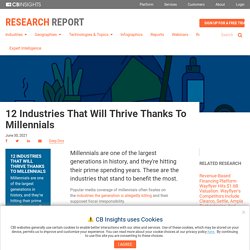 These are the industries that stand to benefit the most. Popular media coverage of millennials often fixates on the industries the generation is allegedly killing and their supposed fiscal irresponsibility. But over the next few decades, Generation Y will enter its prime spending years — and it’s set to receive $30T in wealth from baby boomers and Gen X.

This transfer of wealth has already begun transforming a range of industries. Some industries benefiting from millennials’ increased spending power, such as travel, reflect well-worn Gen Y tropes like the general preference for “experiences” over things. However, these industries won’t thrive unchanged. Millennials want houses, but they don't want what boomers are selling. For every article saying that millennials don't want to live in the suburbs, there's another post about how having kids and looking for schools changes everything. "Millennials are not moving en masse to metros with dense big cities, but away from them," write planners Joel Kotkin and Wendell Cox. They claim they are leaving New York and Los Angeles for Houston and Dallas, as well as Charlotte, Phoenix and Nashville.

Kevin Drum of Mother Jones picks up the story: ... overall, millennials don't prefer cities any more than any previous generation. Nor have they given up cars, which they own at about the same rate as every generation has since the '70s. Money worries impacting millennials’ job performance - Your Money. Nine in 10 (87 per cent) millennials say money worries affect them while they’re at work. More than half (53 per cent) of 18 to 34-year-olds worry about money either always or often. A third (36 per cent) have made no preparations for an unexpected financial event, and just 34 per cent have a savings pot for emergencies The figures come from Close Brothers’ Financial Wellbeing Index developed in conjunction with corporate wellbeing expert Professor Sir Cary Cooper. If found that anxiety about money is far less common among older age groups with just over a third (36 per cent) of 35 to 54-year-olds worrying about money, and just one in five (20 per cent) of those over 55. Millennials Are Going Into Debt for Their Pets.

Millennials Facing Harsh Financial Times Over Pet Debt Sure, we all love our dogs (doggos), cats (kittehs), birds (birbs), and all other varieties of animals but it turns out that members of the millennial generation are struggling to afford their beloved pets. RELATED: Dogs vs. Cats: One Makes Owners Much Happier In a recent spate of survey results released by LendingTree, it appears that those born in the 1980s and 1990s are having a really hard time with the cost of owning a living, breathing animal. The most striking statistic? Beyond that, if even a somewhat routine surgery was on the horizon for Rusty or Snowball, exactly half of all polled pet lovers would have to turn to debt to pay for the operation.

No matter what, it seems that those of us who love “Man's Best Friend” are willing to put up the cash to make sure they're happy, healthy, and safe. Cats Rule, Dogs Drool: At Least In Terms of Owner Worries.