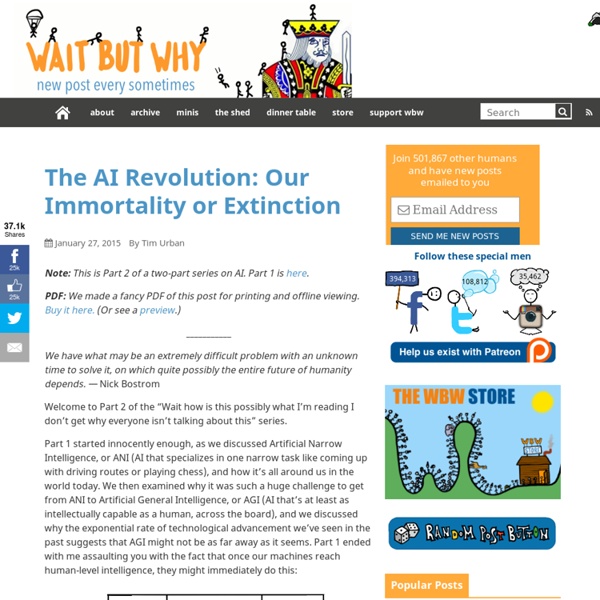 Note: This is Part 2 of a two-part series on AI. Part 1 is here. PDF: We made a fancy PDF of this post for printing and offline viewing. Buy it here. (Or see a preview.) We have what may be an extremely difficult problem with an unknown time to solve it, on which quite possibly the entire future of humanity depends. — Nick Bostrom Welcome to Part 2 of the “Wait how is this possibly what I’m reading I don’t get why everyone isn’t talking about this” series. Part 1 started innocently enough, as we discussed Artificial Narrow Intelligence, or ANI (AI that specializes in one narrow task like coming up with driving routes or playing chess), and how it’s all around us in the world today. This left us staring at the screen, confronting the intense concept of potentially-in-our-lifetime Artificial Superintelligence, or ASI (AI that’s way smarter than any human, across the board), and trying to figure out which emotion we were supposed to have on as we thought about that.← open these i.e. Timeline

Are Chatbots the Future of Banking (...& Customer Service)? Earlier this year I wrote about an interesting new start-up that’s using machine learning to provide a more intuitive interface between customers and their banks. The platform utilizes machine learning to classify the transactions we make each month, and then provide intelligent insights into the patterns it observes. For instance, it might tell us how much we’re spending at a particular coffee shop, or whether we might be able to save money on our utility bills. Automated banking It seems part of an interesting trend towards more automated banking. We tend to put great emphasis on leadership skills and ways we can learn and build them (and spend a ton of money on professional development each year, too). But if you really want to inspire the people around you, you need to focus on developing the characteristics that make you a standout leader. In fact, there are 33 characteristics employees find most inspiring about their colleagues and managers, according to new research conducted over three years by Mark Horwitch and Meredith Whipple Callahan at Bain & Co.

Microsoft researchers say their newest deep learning system beats humans Mobile executive? VB is hosting our 5th annual Mobile Summit on February 23–24 at the scenic Cavallo Point Resort in Sausalito, CA. See if you qualify here. The Universe Is Dying We’re all screwed. Well, if you’re planning to stick around for a few more billion years. Researchers have found that galaxies are losing energy at a rather alarming rate, and confirm that all energy in the universe will eventually dissipate into nothingness. Craig Venter's new longevity startup will make "100 the new 60" I have always thought that the real secret to improved health isn't down the path of better medicines and reduced drug costs (although these are important goals), but rather through improved healthcare systems that are less costly, and can detect patient health problems earlier through new technologies. The problem with better healthcare systems is that there are so many special interests involved these days that you don't get good outcomes. The Obamacare rollout should have been proof positive of that. The only healthcare system which works is one which allows the supply of medical services to meet the demand for medical services and let the suppliers and consumers sort it out.

How AI & HI Are Combined Will Define Humanity’s Future Through the past few decades of summer blockbuster movies and Silicon Valley products, artificial intelligence (AI) has become increasingly familiar and sexy, and imbued with a perversely dystopian allure. What’s talked about less, and has also been dwarfed in attention and resources, is human intelligence (HI). In its varied forms — from the mysterious brains of octopuses and the swarm-minds of ants to Go-playing deep learning machines and driverless-car autopilots — intelligence is the most powerful and precious resource in existence. Our own minds are the most familiar examples of a phenomenon characterized by a great deal of diversity. Yet, HI is unique among this variety of intelligence because of its unparalleled ability to design, modify and build new forms of intelligence.

Steve Blank Books for Startups See the “Startup Tools” Tab for Tools and Blogs. For Books on Silicon Valley History see here Free Harvard Business Review article here Entrepreneurial Management StackOver the last few years we’ve discovered that startups are not smaller versions of large companies. The skills founders need are not covered by traditional books for MBA’s and large company managers. Remote Control of the Mind – Over the Internet Researchers demonstrate the first ever human-to-human brain interface. Imagine if it were possible for one person to control another person’s movements over the internet, purely using their thoughts. Well, researchers at the University of Washington have managed to set up the first ever noninvasive human-to-human brain interface. Rajesh Rao, who has been working on brain-computer interfaces for 10 years, recently managed to use his brain’s electrical activity to send a signal to a colleague, over the internet, and control the other person’s hand movements. To achieve this they used an EEG machine (electroencephalography) to record the electrical activity in the brain. When the computer detected that the person was trying to move his hand, a signal was sent over the internet to a colleague sitting in a room, on the other side of the university campus.

Will machines eventually take on every job? It’s a booming time to be a truck driver. According to data NPR compiled from the US Census Bureau, truck driving is currently the most popular job in 29 states. It’s not that truck driving is a particularly sought after career path, however. If the Body Is a Machine, Can It Be Maintained Indefinitely? If the Body Is a Machine, Can It Be Maintained Indefinitely? To Aubrey de Grey, the body is a machine. Just as a restored classic car can celebrate its hundredth birthday in peak condition, in the future, we’ll maintain our bodies’ cellular components to stave off the diseases of old age and live longer, healthier lives. Dr. de Grey is cofounder and Chief Science Officer of the SENS Research Foundation and faculty at Singularity University’s November Exponential Medicine conference—an event exploring the healthcare impact of technologies like low-cost genomic sequencing, artificial intelligence, synthetic biology, gene therapy, and more.

How blockchain can change the future of IoT The Internet of Things (IoT) is a fast-growing industry destined to transform homes, cities, farms, factories, and practically everything else by making them smart and more efficient. According to Gartner, by 2020, there will be more than 20 billion connected things across the globe, powering a market that will be worth north of $3 trillion. But the chaotic growth of IoT will introduce several challenges, including identifying, connecting, securing, and managing so many devices. It will be very challenging for the current infrastructure and architecture underlying the Internet and online services to support huge IoT ecosystems of the future.