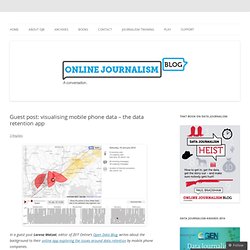 It’s not very often that one can follow the direct impact of an article, let alone a piece of data journalism. But the visualization of the cellphone data of Malte Spitz from the Green party in Germany led to visible repercussions in the US. Following a piece in the New York Times about Spitz and the data app, some days ago two senators wrote a letter to the 4 main US-carriers for information about their data retention policy. After publishing the app in German one month ago (and 20 days later the English version), the feedback was overhelming.

We didn’t think that so many people would be so interested in it. Around February 1st, ZEIT Online asked me if I had an idea what do do with the dataset of Malte Spitz (read the background story about the legal action of Spitz to get the data here). Like this: Future Journalism Project — German politician Malte Spitz went to court in. German politician Malte Spitz went to court in order to obtain all information that his cell phone carrier Deutsche Telekom had about his activity. 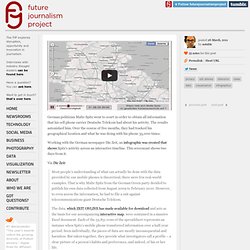 The results astonished him. Over the course of five months, they had tracked his geographical location and what he was doing with his phone 35,000 times. Working with the German newspaper Die Zeit, an infographic was created that shows Spitz’s activity across an interactive timeline. This screencast shows two days from it. Via Die Zeit: Most people’s understanding of what can actually be done with the data provided by our mobile phones is theoretical; there were few real-world examples. The interactive can be viewed here. » Malte Spitz uncovers mobile phone tracking data about himself - Notes - Spectrum - DW-WORLD.DE. Grahame Womentalkonline is a project by the DW South and Southeast Asia service. 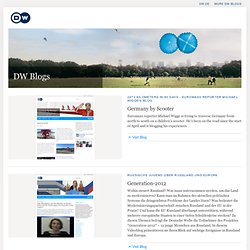 The blog is an attempt to lend a voice to women in Asia, Europe and around the world and to foster discussion on women’s issues. Our partner: the Friedrich Ebert Foundation Manasi DW works closely with the Friedrich Ebert Foundation in Germany on this project. Arafatul We encourage young bloggers who want to write for us. We look forward to hearing from you! Visit Blog. Data Protection: Betrayed by our own data. Mobile phones are tracking devices that reveal much about our lives. 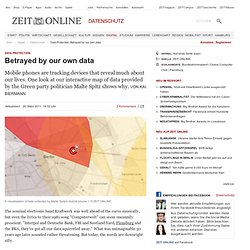 One look at our interactive map of data provided by the Green party politician Malte Spitz shows why. Speichern Drucken Twitter Facebook. What Location Tracking Looks Like. Your cell phone company knows everywhere you go, twenty-four hours a day, every day. 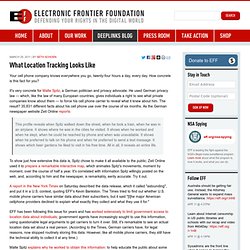 How concrete is this fact for you? It's very concrete for Malte Spitz, a German politician and privacy advocate. He used German privacy law — which, like the law of many European countries, gives individuals a right to see what private companies know about them — to force his cell phone carrier to reveal what it knew about him. The result? Cellphones Track Your Every Move, and You May Not Even Know. Privacy Advocate Gets 35,000 Points of Location from T-Mobile. German Green party member and privacy advocate Malte Spitz wanted to see just how much data T-Mobile Germany was storing about him, so he went after T-Mobile, and after a legal back-and-forth, received 35,831 points of location information spanning as far back as six months (a time period mandated by local law). 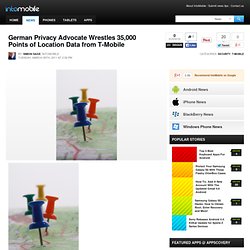 Of course, there are always services like Foursquare, Google Latitude, and BlackBerry Traffic that make explicit use of gathering and sharing location data, but it’s when that information is being stored without warning that folks might get a bit jumpy. Personally, I find there are only two situations where location data can be used practically by carriers for anything other than figuring out which cell tower you’re connecting two.

Data Protection - Datenschutz - Digital - ZEIT ONLINE. Betrayed by our own dataMobile phones are tracking devices that reveal much about our lives. 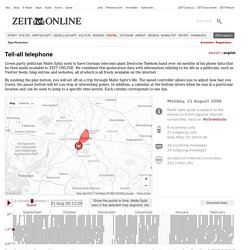 One look at our interactive map of data provided by the Green party politician Malte Spitz shows why. Nuclear plants in your neighbourhoodHow many people live near a nuclear power plant in Germany? How many people lives within a radius of 20 kilometres? PISA based Wealth ComparisonHow do families live these days? ZEIT ONLINE analyzed and visualized the data OECD's comprehensive world education ranking report, PISA 2009.

A United States of Europe?