KBS-Big-Data-final. What’s Hadoop? When you learn about Big Data you will sooner or later come across this odd sounding word: Hadoop – but what exactly is it? 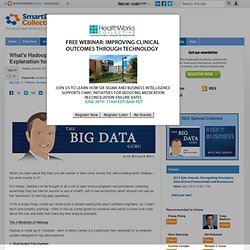 Put simply, Hadoop can be thought of as a set of open source programs and procedures (meaning essentially they are free for anyone to use or modify, with a few exceptions) which anyone can use as the “backbone” of their big data operations. I’ll try to keep things simple as I know a lot of people reading this aren’t software engineers, so I hope I don’t over-simplify anything – think of this as a brief guide for someone who wants to know a bit more about the nuts and bolts that make big data analysis possible. The 4 Modules of Hadoop Hadoop is made up of “modules”, each of which carries out a particular task essential for a computer system designed for big data analytics. 1.

(A “file system” is the method used by a computer to store data, so it can be found and used. 2. 3. How Hadoop Came About The Usage of Hadoop So that, in a (fairly large) nutshell, is Hadoop.

Analytics Handbook Series. Free Big Data Analytics Handbook. Big data for law firms. The Free 'Big Data' Sources Everyone Should Know. I always make the point that data is everywhere – and that a lot of it is free. 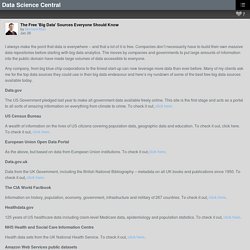 Companies don’t necessarily have to build their own massive data repositories before starting with big data analytics. The moves by companies and governments to put large amounts of information into the public domain have made large volumes of data accessible to everyone. Any company, from big blue chip corporations to the tiniest start-up can now leverage more data than ever before. Big Data Startup Antuit Raises $56 Million Led By Goldman Sachs. It isn’t often that we hear that an 18-month-old startup raised $56 million, and it’s even less likely when the company is based in Asia — but that’s exactly the case for Antuit, a big data startup that is headquartered in Singapore. 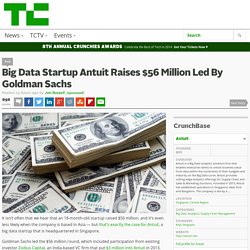 Goldman Sachs led the $56 million round, which included participation from existing investor Zodius Capital, an India-based VC firm that put $3 million into Antuit in 2013. Antuit provides big data analytics and consultancy for a range of different business. It counts more than 20 companies on its client roster, including eight Fortune 500 firms. In more basic terms, the startup takes big data and statistical analysis and applies it in a practical way to help businesses make smarter decision. Moving From Big Data To Intelligent Data. Many have called 2014 the year of Big Data, meaning that marketers are now numbers-rich, but they are still insight-poor. 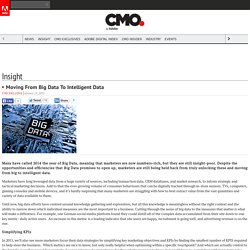 Despite the opportunities and efficiencies that Big Data promises to open up, marketers are still being held back from truly unlocking these and moving from big to intelligent data. Marketers have long leveraged data from a huge variety of sources, including transaction data, CRM databases, and market research, to inform strategic and tactical marketing decisions. Add to that the ever-growing volume of consumer behaviours that can be digitally tracked through in-store sensors, TVs, computers, gaming consoles and mobile devices, and it’s hardly surprising that many marketers are struggling with how to best extract value from the vast quantities and variety of data available to them. Simplifying KPIs Maintaining Investment But investments, whether in talent, technology, or partners, need to be carefully considered and maintained. First Steps In Predictive Analytics. Big data and data protection: preparing for tales of the unexpected. 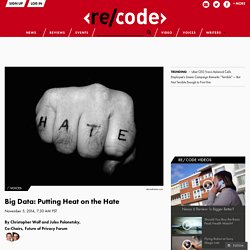 Hate Crimes Prevention Act. That law, enacted in memory of two people brutally killed in hate crimes, has generated important police training and outreach to prevent crimes rooted in hate-filled discrimination and bigotry. It also has produced comprehensive statistics — in tandem with the Hate Crime Statistics Act of 1990 — about crimes “that manifest evidence based on race, religion, sexual orientation, or ethnicity,” as well as gender and gender identity. Hate crime statistics provide valuable insights about the perpetrators of hate crimes and their motivations. Those insights are a key resource used by civil-society groups and law enforcement to prevent future hate crimes and fight against the terrible effects on victims and on society of discrimination and bigotry. 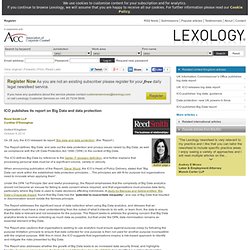 The Report defines ‘Big Data’ and sets out the data protection and privacy issues raised by Big Data, as well as compliance with the UK Data Protection Act 1998 (‘DPA’) in the context of Big Data. The ICO defines Big Data by reference to the Garter IT glossary definition, and further explains that processing personal data must be of a significant volume, variety or velocity. When announcing publication of the Report, Steve Wood, the ICO’s Head of Policy Delivery, stated that “Big Data can work within the established data protection principles….The principles are still fit for purpose but organisations need to innovate when applying them”. To address these concerns, the ICO recommends several ‘tools for compliance’, including: Privacy Impact Assessments (PIAs) Privacy by Design Promoting transparency through Privacy Notices.

When Big Data Marketing Becomes Stalking. SA Forum is an invited essay from experts on topical issues in science and technology. 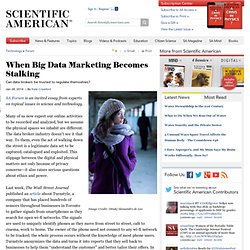 Many of us now expect our online activities to be recorded and analyzed, but we assume the physical spaces we inhabit are different. The data broker industry doesn’t see it that way. To them, even the act of walking down the street is a legitimate data set to be captured, catalogued and exploited. This slippage between the digital and physical matters not only because of privacy concerns—it also raises serious questions about ethics and power. Last week, The Wall Street Journal published an article about Turnstyle, a company that has placed hundreds of sensors throughout businesses in Toronto to gather signals from smartphones as they search for open wi-fi networks.

Prominent voices in the public and private sectors are currently promoting boundless data collection as a way of minimizing threats and maximizing business opportunities. Clearly this was a mistake, but it was a revealing one.

The “Big Data” Landscape. Big Data: is your company prepared? Beeline Kries supports Big Data. A Primer on Big Data for Business. Could big data help the police predict crime? Intersection of Cloud, Mobility, Big Data and the Internet of Th. Top 5 Most Important Companies in Big Data. Big Data and transparency. The Big Data Fight and What We Can Learn from Adam, Eve and Aldo. Google's Eric Schmidt Invests in Obama's Big Data Brains. During the 2012 campaign, Barack Obama’s reelection team had an underappreciated asset: Google’s ( GOOG ) executive chairman, Eric Schmidt. He helped recruit talent, choose technology, and coach the campaign manager, Jim Messina, on the finer points of leading a large organization. “On election night he was in our boiler room in Chicago,” says David Plouffe, then a senior White House adviser. Schmidt had a particular affinity for a group of engineers and statisticians tucked away beneath a disco ball in a darkened corner of the office known as “the Cave.”

The data analytics team, led by 30-year-old Dan Wagner, is credited with producing Obama’s surprising 5 million-vote margin of victory. Schmidt thought enough of the team that when the campaign ended, he put up several million dollars to keep its core together as a new consulting firm, Civis Analytics, run by Wagner and staffed by two dozen of his former employees. Photograph by Andrew Harrer/Bloomberg Eric Schmidt. 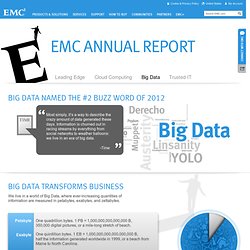 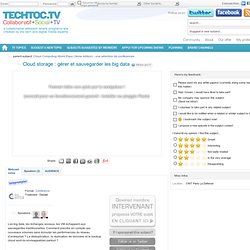 You can buy: Fee: 1800€ Video file command Fee: 1980€ In the first two cases be careful: you can purchase the file for a single use (for archiving, integration of excerpts in a film company, integrating on your blog in a format and / or another player that you selected): you can not then claim as a commercial file: please read terms and conditions prior to purchase that will appear below. NB. Be careful, you're about to acquire the source file that permits generating this video techtoc.tv.

This does not in any way correspond to an assignment of copyright or opening any proprietary and / or commercial exploitation of this file. This video is dedicated to use for backup and comfortable viewing in a private setting (under archive, for example if you appear in the film and want to keep track of quality, or to mount a DVD with your response). Thank you for your understanding. Remember to check your mailing address. Huffington Post Releases Polling Data for Developers.

The Huffington Post has begun offering API access to its polling data, a move that makes the data easily accessible to software developers, Andrei Scheinkman and Mark Blumenthal write. 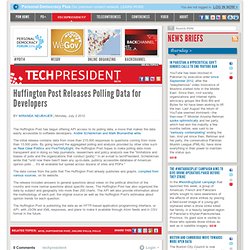 The initial release contains data from more than 215,000 responses to questions coming from more than 13,000 polls. By going beyond the aggregated polling and analysis provided by other sites such as Real Clear Politics and FiveThirtyEight, the Huffington Post hopes to make polling data more transparent and in doing so help journalists, researchers and policy analysts see the "limitations and biases of polls and the organizations that conduct [polls]. " In an e-mail to techPresident, Scheinkman wrote that "until now there hasn't been any up-to-date, publicly accessible database of American opinion polls ... it's all available but spread across dozens of sites and PDFs.

" The data comes from the polls that The Huffington Post already publishes and graphs, compiled from various sources, on its website.

In defense of Big Data and political campaing

Christophe Caquineau (Global) - Big Data, Big Opportunity. Master Data Management. FB's next idea. Idgconnect. Business Forum: Like it or not, Big Data is here to stay. A new high-tech catchphrase has sprung into common usage in the past year: "Big Data. " While the history of Silicon Valley is littered with soon-to-be-forgotten buzzwords, Big Data is likely to become central to 21st-century businesses, governments, societies and individuals. So it's worth investigating its benefits and potential dangers. What is Big Data? It is the gathering of unprecedentedly large amounts of digital information generated on the Web and applying sophisticated statistical algorithms to identify new or previously unrecognized trends and predict future behavior.

The applications of Big Data range from consumer marketing (more-powerful, personalized Web ads), to practical (your car's GPS suggesting an alternate route during rush hour based on traffic projections) to public health (identifying epidemics and famines as they begin). If 'Big Data' Simply Meant Lots of Data, We Would Call It 'Lots of Data'

Big data is coming. Should we be afraid?

The Internet Of Things Has Been Hacked, And It's Turning Nasty. Big Data.