Tiny Weed-Killing Robots Could Make Pesticides Obsolete. The Greenfield robotic solution is based on a simple idea: Keep mowing. 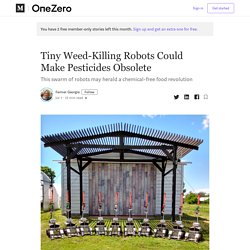 When Brauer started thinking about which weed to target first, pigweed was an obvious first enemy. The pain-in-the-ass weed, also known as Palmer amaranth, claims the annoying weed holy grail — it is invasive, adaptive, and herbicide-resistant. A single plant, undeterred, can grow over six feet tall and produce up to half a million tiny seeds.

It distributes easily, and young seedlings continue to germinate even after the cash crop is planted. Farmers have to keep working to get rid of it even after their crop starts growing, otherwise, it quickly takes over. NewsFeed Defenders. Our new media literacy game teaches players how to detect and disregard disinformation and misinformation in today’s chaotic environment. 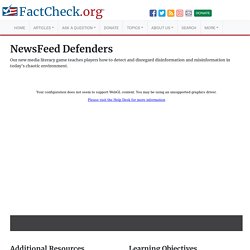 Learning Objectives Identify markers of verification, transparency, accountability, and independence in news stories.Define and identify problematic news items, and other news-related types of misinformation.Explain a variety of strategies to verify images and information.Evaluate text for bias based on word choices and framing methods.Use third-party information to judge the credibility of a source.Evaluate the benefits and challenges of digital news and social media to a democratic society. Teacher Extension Pack Make your students’ gameplay more meaningful by using our activity and assessment set designed specifically for NewsFeed Defender. This easy-to-use Extension Pack helps you give context and purpose to the game, as well as reinforce and assess the game concepts. Download the Teacher Extension Pack. Regenerative agriculture can make farmers stewards of the land again.

For years, “sustainable” has been the buzzword in conversations about agriculture. 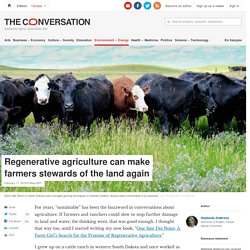 If farmers and ranchers could slow or stop further damage to land and water, the thinking went, that was good enough. I thought that way too, until I started writing my new book, “One Size Fits None: A Farm Girl’s Search for the Promise of Regenerative Agriculture.” I grew up on a cattle ranch in western South Dakota and once worked as an agricultural journalist.

Heal the World - or not

Sharon Jones & the Dap-Kings - Matter of Time. Andra Day - Rise Up (Lyrics) Michael Pawlyn: Using nature's genius in architecture. How Bill Gates-backed vegan Beyond Meat is winning over meat-eaters. Whatever your burger pleasure, targeting meat-eaters is a smart move — there are way more of them than there are vegans and vegetarians. 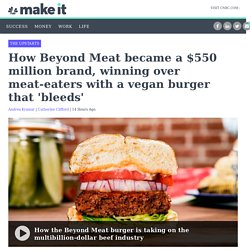 Only 5 percent of Americans identify as vegetarian and 3 percent vegan, according to a 2017 Gallup poll. Those numbers haven't changed much in the last decade or so. Brown says the company found that 93 percent of the consumers in conventional grocery stores that are buying a Beyond Meat product are also putting animal meat their basket. Muslims Worked a Soup Kitchen on Christmas Eve to Give Christians the Day Off. In a gesture of goodwill and human decency, a group of Muslims in Detroit volunteered at a Christian church’s soup kitchen on Christmas Eve so the usual volunteers could take time off for the holiday. 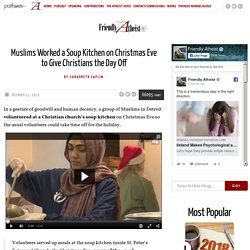 Volunteers served up meals at the soup kitchen inside St. Peter’s Episcopal Church. How This Guy Cleaned a Lake. Solnit on Hope in Dark Times, Resisting Defeatism. 99 Good News Stories You Probably Didn’t Hear About in 2018. Swiss Businessman is Contributing $1 Billion Towards Protecting 30% of the Planet. A Swiss businessman is taking it upon himself to ensure the planet’s survival by contributing $1 billion to an astonishing international conservation effort. 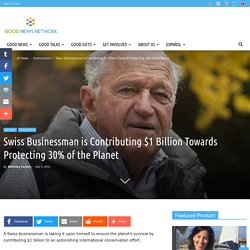 In a recent op-ed that he published through the New York Times, Hansjörg Wyss announced that he will be using the money to launch the Wyss Campaign for Nature: an ambitious collaborative mission to protect 30% of the world’s surface by 2030. The money will be distributed through his foundation over the course of the next decade in partnership with the National Geographic Society, the Nature Conservancy, and Argentinian environmental group Fundacion Flora y Fauna.

“This money will support locally led conservation efforts around the world, push for increased global targets for land and ocean protection, seek to raise public awareness about the importance of this effort, and fund scientific studies to identify the best strategies to reach our target,” wrote Wyss. 'We have a duty to act': hundreds ready to go to jail over climate crisis. A new group of “concerned citizens” is planning a campaign of mass civil disobedience starting next month and promises it has hundreds of people – from teenagers to pensioners – ready to get arrested in an effort to draw attention to the unfolding climate emergency. 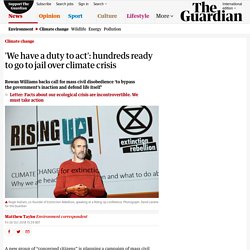 Eli Saslow & Derek Black - From Racism to Redemption in "Rising Out of Hatred" - Extended Interview - The Daily Show with Trevor Noah (Video Clip) You don't need words to be a good sport or good human (under 12 soccer) A Moment of Possibility and Peril – Bono. Beloved Artist Agnes Martin on Our Greatest Obstacle to Happiness click 2x. Meet the People Planting Trees After Canada's Lumber Harvest. 4th GRADER sings IMAGINE by John Lennon. [Image] Find a reason for being. Syrian refugees learn masonry to rebuild 2x.

Cry, Heart, But Never Break: A Remarkable Illustrated Meditation on Loss and Life. “Each day, we wake slightly altered, and the person we were yesterday is dead,” John Updike wrote, “so why … be afraid of death, when death comes all the time?” 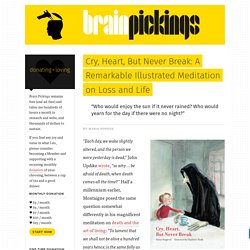 Images That Capture Human Spirit. Welcome. The Trump era won't last for ever. But we must do our part to end it. The Revolutionary Giant Ocean Cleanup Machine Is About To Set Sail. On a Wednesday afternoon in a sprawling lot on a former naval air station in Alameda, California, across the bay from San Francisco, workers are welding a massive black tube together. 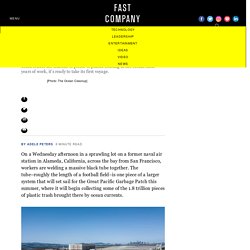 The tube–roughly the length of a football field–is one piece of a larger system that will set sail for the Great Pacific Garbage Patch this summer, where it will begin collecting some of the 1.8 trillion pieces of plastic trash brought there by ocean currents. Six years ago, the technology was only an idea presented at a TEDx talk. Self drive & electric vehicles will change whole world.