Regenerative agriculture can make farmers stewards of the land again 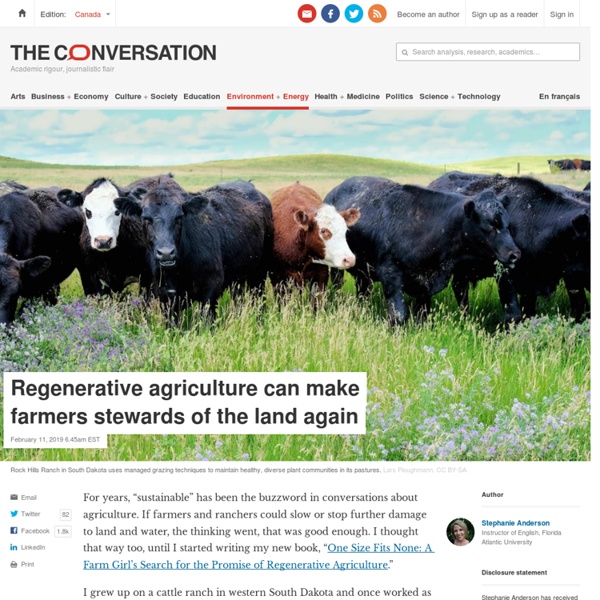 For years, “sustainable” has been the buzzword in conversations about agriculture. If farmers and ranchers could slow or stop further damage to land and water, the thinking went, that was good enough. I thought that way too, until I started writing my new book, “One Size Fits None: A Farm Girl’s Search for the Promise of Regenerative Agriculture.” I grew up on a cattle ranch in western South Dakota and once worked as an agricultural journalist. For me, agriculture is more than a topic – it is who I am. When I began working on my book, I thought I would be writing about sustainability as a response to the environmental damage caused by conventional agriculture – farming that is industrial and heavily reliant on oil and agrochemicals, such as pesticides and fertilizers. But there is an alternative. What holds conventional farmers back Modern American food production remains predominantly conventional. Several generations into this system, many conventional farmers feel trapped. The future

Related:  know about world • Why or Why Not • HOPE • Solutions • Food Supply - Monsanto & other pollutants

Plummeting insect numbers 'threaten collapse of nature' The world’s insects are hurtling down the path to extinction, threatening a “catastrophic collapse of nature’s ecosystems”, according to the first global scientific review. More than 40% of insect species are declining and a third are endangered, the analysis found. The rate of extinction is eight times faster than that of mammals, birds and reptiles. The total mass of insects is falling by a precipitous 2.5% a year, according to the best data available, suggesting they could vanish within a century. The planet is at the start of a sixth mass extinction in its history, with huge losses already reported in larger animals that are easier to study. But insects are by far the most varied and abundant animals, outweighing humanity by 17 times.

How the Netherlands Feeds the World This story appears in the September 2017 issue of National Geographic magazine. In a potato field near the Netherlands’ border with Belgium, Dutch farmer Jacob van den Borne is seated in the cabin of an immense harvester before an instrument panel worthy of the starship Enterprise. From his perch 10 feet above the ground, he’s monitoring two drones—a driverless tractor roaming the fields and a quadcopter in the air—that provide detailed readings on soil chemistry, water content, nutrients, and growth, measuring the progress of every plant down to the individual potato. Van den Borne’s production numbers testify to the power of this “precision farming,” as it’s known. The global average yield of potatoes per acre is about nine tons. Van den Borne’s fields reliably produce more than 20.

Roundup trial: Cancer patient takes on Monsanto in first trial over weed killer risk Doctors have said they didn't expect him to live to see this day. But Monday marks a milestone: Johnson, 46, is the first of hundreds of cancer patients to see his case against agrochemical giant Monsanto go to trial. CNN reported last year that more than 800 patients were suing Monsanto, claiming its popular weed killer, Roundup, gave them cancer. People who think their opinions are superior to others are most prone to overestimating their relevant knowledge and ignoring chances to learn more By guest blogger Tom Stafford We all know someone who is convinced their opinion is better than everyone else’s on a topic – perhaps, even, that it is the only correct opinion to have. Maybe, on some topics, you are that person. No psychologist would be surprised that people who are convinced their beliefs are superior think they are better informed than others, but this fact leads to a follow on question: are people actually better informed on the topics for which they are convinced their opinion is superior? This is what Michael Hall and Kaitlin Raimi set out to check in a series of experiments in the Journal of Experimental Social Psychology.

Celery's path from delicacy to crudité to Instagram trend — Quartzy In certain corners of the Instagrammed world, celery juice is celebrated and lovingly photographed as the latest wellness tonic. Its proponents call it a miracle elixir that can cure a host of bodily ills. The science is dubious at best, but the juice’s bright green hue makes it photogenic, and at least it seems healthy. The current celery-juice craze is largely powered by the teachings of one man, the “Medical Medium” Anthony William, who purports to have first heard about celery juice’s curative powers from a mysterious voice that has been speaking to him since childhood about health-related topics.

Muslims Worked a Soup Kitchen on Christmas Eve to Give Christians the Day Off In a gesture of goodwill and human decency, a group of Muslims in Detroit volunteered at a Christian church’s soup kitchen on Christmas Eve so the usual volunteers could take time off for the holiday. Volunteers served up meals at the soup kitchen inside St. Peter’s Episcopal Church. On Christmas Eve, many of the usual volunteers have other obligations, which is why Muslim volunteers from Mercy-USA for Aid and Development stepped up to lend a hand.“We’re alleviating volunteers who would normally like to celebrate the holidays,” said Kayla Botelho.

A simple idea to whip climate change Many people working on this subject believe the world needs a carbon tax on dirty fuels - coal and oil - to solve the problem. However, the problem with a carbon tax is that it has so far been impossible to impose without governments falling. The Australian government tried to bring one in and they were kicked out - the new government cancelled it. In November 2018, the state of Washington voted against a carbon tax for the second time in two years. Carbon taxes are of course well-intentioned. Bayer completes $63-billion Monsanto takeover FRANKFURT AM MAIN: German chemicals and pharmaceuticals giant BayerNSE 0.00 % said Thursday its two-year pursuit of US-based MonsantoNSE 1.01 % was over, as the two firms signed off a $63-billion merger deal. "Shares in the US company will no longer be traded on the New York Stock Exchange, with Bayer now the sole owner of Monsanto Company," the German firm said in a statement. Here's what you need to know about the $63-billion megadeal:

A quantum experiment suggests there’s no such thing as objective reality Back in 1961, the Nobel Prize–winning physicist Eugene Wigner outlined a thought experiment that demonstrated one of the lesser-known paradoxes of quantum mechanics. The experiment shows how the strange nature of the universe allows two observers—say, Wigner and Wigner’s friend—to experience different realities. Since then, physicists have used the “Wigner’s Friend” thought experiment to explore the nature of measurement and to argue over whether objective facts can exist. That’s important because scientists carry out experiments to establish objective facts.

OB/GYN Shares The Many Reasons Her Patients Had For Abortions, Says They’re All Completely Valid Alabama has made a home in the headlines after Governor Kay Ivey signed the Alabama Human Life Protection Act – the countries most restrictive abortion law to date. In response women everywhere have used whatever platform they have to share their opinions and experiences, the most popular one being social media. Several hashtags have popped up to encourage and destigmatize the dialogue surrounding abortions such as #ShoutYourAbortion and #YouKnowMe, and while many agree that sharing these stories are important, others – like this OB/GYN – also think that a woman shouldn’t have to share or have a traumatic story for her right to choose to be respected. This OB/GYN responded to the new abortion law in Alabama in a powerful post that has since gone viral An obstetrician-gynecologist with almost 17-years of experience shared a post on the website Scary Mommy as a response to Alabama’s law, that only allows abortions to prevent a serious health risk.

99 Good News Stories You Probably Didn’t Hear About in 2018 Another year of hard-fought wins in conservation 1. The Kofan people of Sinangoe, in the Ecuadorian Amazon, won a landmark legal battle to protect the headwaters of the Aguarico River, nullifying 52 mining concessions and freeing up more than 32,000 hectares of primary rainforest. Amazon Frontlines 2.