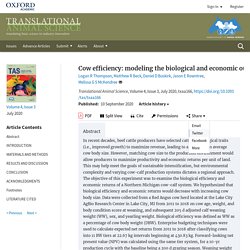 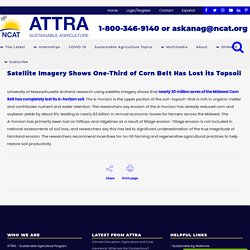 The A-horizon is the upper portion of the soil—topsoil—that is rich in organic matter and contributes nutrient and water retention. The researchers say erosion of the A-horizon has already reduced corn and soybean yields by about 6%, leading to nearly $3 billion in annual economic losses for farmers across the Midwest. Power, Food and Agriculture: Implications for Farmers, Consumers and Communities by Mary Hendrickson, Philip H. Howard, Douglas Constance. Abstract One of the most pressing concerns about the industrialization of agriculture and food is the consolidation and concentration of markets for agricultural inputs, agricultural commodities food processing and groceries. 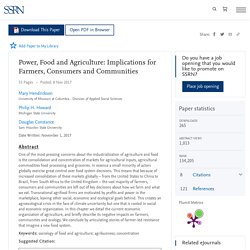 In essence a small minority of actors globally exercise great control over food system decisions. This means that because of increased consolidation of these markets globally – from the United States to China to Brazil, from South Africa to the United Kingdom – the vast majority of farmers, consumers and communities are left out of key decisions about how we farm and what we eat. Health-Promoting Phytonutrients Are Higher in Grass-Fed Meat and Milk. Introduction Navigating discussions on red meat and human and environmental health are challenging. 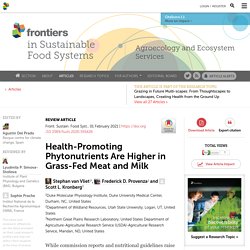 On the one hand, reports such as those by the EAT-Lancet Commission asks consumers to embrace near plant-exclusive diets to reduce our impacts on planetary health (Willett et al., 2019). On the other hand, reports such as those by the United Nations Intergovernmental Panel on Climate Change (IPCC, 2019) suggest a critical role for sustainable livestock production systems in climate change mitigation by integrating tree, crop, and livestock production systems, while ensuring global food security and nutrient adequacy via consumption of moderate amounts of animal foods. Meanwhile in the field of human nutrition, a wealth of epidemiological data associate animal food consumption, particularly red meat, with increased risk of cancer (Chan et al., 2011), cardiovascular disease (Zhong et al., 2020), obesity (Wang and Beydoun, 2009), and diabetes (Micha et al., 2012). Why This Pig Farmer Loves the Idea of a Plant-Based Diet. There’s a widely-held and pernicious belief among graziers — producers of things like grass-fed beef and forest-fed pork (full disclosure: I am one)— that CAFO agriculture is the singular root of all evil in the world of animal agriculture. 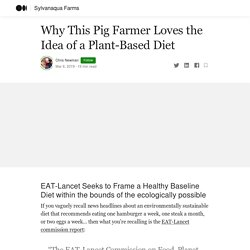 If people simply valued food more and graziers like us replaced the feedlots of the world, solutions to environmental and health problems posed by animal agriculture would flow naturally. Unfortunately, even the kind of production I engage in can’t scale to meet even a fraction of the globally skyrocketing demand for meat: The World's Largest Mining Operation Is Run by Fungi. Author’s note: My blog survey continues, and all readers -- even new ones -- are invited to take it! 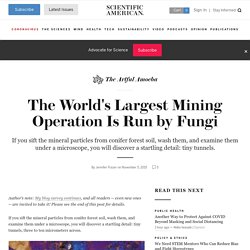 Please see the end of this post for details. If you sift the mineral particles from conifer forest soil, wash them, and examine them under a microscope, you will discover a startling detail: tiny tunnels, three to ten micrometers across. A New Study on Regenerative Grazing Complicates Climate Optimism. Jeff Goodwin, conservation stewardship leader at the Noble Research Institute in Ardmore, Oklahoma, agrees. 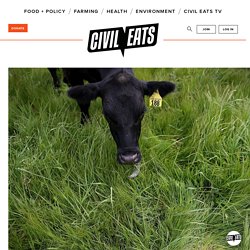 “What do you do with landscapes that aren’t suited for crops for human consumption?” He asks—answering that turning it into high-quality protein and new land-based carbon sinks is a tremendous opportunity for agriculture. Urvashi Rangan, co-chair at Funders for Regenerative Agriculture, a national initiative of funders and investors promoting regenerative agriculture, agrees. “Land is a resource. We use land. The focus on carbon is understandable. Livestock and greenhouse gas emissions. The production of animal source foods (ASFs) creates greenhouse gas (GHG) emissions. 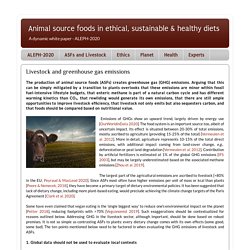 Arguing that this can be simply mitigated by a transition to plants overlooks that these emissions are minor within fossil fuel-intensive lifestyle budgets, that enteric methane is part of a natural carbon cycle and has different warming kinetics than CO2, that rewilding would generate its own emissions, that there are still ample opportunities to improve livestock efficiency, that livestock not only emits but also sequesters carbon, and that foods should be compared based on nutritional value. Emissions of GHGs show an upward trend, largely driven by energy use [OurWorldinData 2020]. The food system is an important source too, albeit of uncertain impact.

Its effect is situated between 20-30% of total emissions, mostly ascribed to agriculture (providing 15-25% of the total) [Vermeulen et al. 2012]. Wally Olson. Impossible to go Beyond Beef? A Nutriomics Comparison. Does Overselling Regenerative Ag’s Climate Benefits Undercut its Potential? Regenerative agriculture is having a moment. 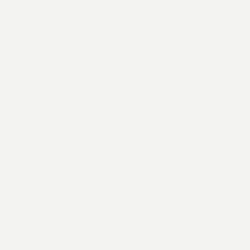 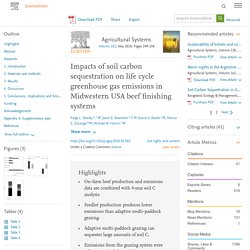 Alemu, H. Janzen, S. New study: Cattle grazing significantly reduces wildfire spread. University of California Cooperative Extension researchers just completed a timely study showing cattle grazing is an essential tool in reducing wildfire — a tool they say should be expanded and refined. Recent record-shattering wildfires across California, Oregon and Washington have demonstrated the need for better fire control. Researchers say their study shows that without the 1.8 million beef cattle that graze California’s rangelands annually, the state would have hundreds to thousands of additional pounds per acre of fine fuels on the landscape, and this year’s wildfires would be even more devastating. Researchers say cattle grazing is underutilized on public and private lands and targeted grazing should be expanded. “Cattle grazing directly impacts fuel load and fire behavior,” said Felix Ratcliff, a rangeland consultant who contributed to the research.

Birds and the Range — BirdConservancy.org. Have you ever wondered why Bird Conservancy talks so much about ranching, or why we have a Stewardship Team with Private Lands Wildlife Biologists working with landowners throughout the western Great Plains? What do birds and working lands have to do with the conservation of grasslands in the West? California’s Switch to Solar, Wind Energy Preserves Groundwater for Drought, Agriculture. Using drought-prone California as a case study, a research team shows that increased solar and wind energy can reduce the reliance on hydropower, especially during drought. Credit: Egan Jimenez, Princeton University California’s switch to solar, wind energy reduced reliance on hydropower, natural gas.

Solar and wind farms are popping up around the country to lower carbon emissions, and these renewables also have another important effect: keeping more water in the ground. A new Princeton University-led study in Nature Communications is among the first to show that solar and wind energy not only enhance drought resilience, but also aid in groundwater sustainability.

Survey Montanans Support Any Means Necessary to Preserve Outdoors / Public News Service. Saving the Planet – Schumacher Center for New Economics. Can Meat Actually Save The Planet? Grazing Like It's 1799: How Ranchers Can Bring Back Grassland Birds. Grasslands are tough. Can Meat Actually Save The Planet? The Future Is Rural 2019. Regenerative agriculture can make farmers stewards of the land again.